DeathSpank is a true story, ok so perhaps that part was a lie, but it's humour such as this that begins DeathSpank on a path to glory, and from the get-go you know that you are in for one hell of a ride. Centred on our likely hero DeathSpank; Dispenser of Justice, Vanquisher of Evil and Hero to the Downtrodden, who is on the quest to becoming a true hero, worthy of the mysterious artefact, known only as ‘The Artifact’. Many other heroes have attempted to grasp it's power but failed, however DeathSpank is so awesome that he's going to have a bit of a hard time getting the Artifact with so many dangers in his path.

The great thing about DeathSpank, is it takes itself seriously as a game, but as a concept throws satire, parody and just general laugh-out-loud humour throughout the game as much as it can. Best of all that most players will undoubtedly find annoying is the complete over-the-top spirit of the game, each dialogue with non-playable characters will be delivered via DeathSpank's condescending manner; 'Good Evening non-important person' will have you splitting your sides at the insane quests that you will be given.

The most entertaining parts of DeathSpank come from the inhabitants of the world, spoilt orphans, taco vendors and Spelunkers are but to mention a small fraction of the colourful characters that you will meet, however the best character in the game must be Eubrick the retired, an old hero that will re-tell his stories of heroic deeds, that are all really a selection of overtly boasted lies, best of all is the tale of how he sold his sidekick, for information on the secret of Monkey Island, unfortunately DeathSpank doesn't care for the information so it's officially true, we will never know! 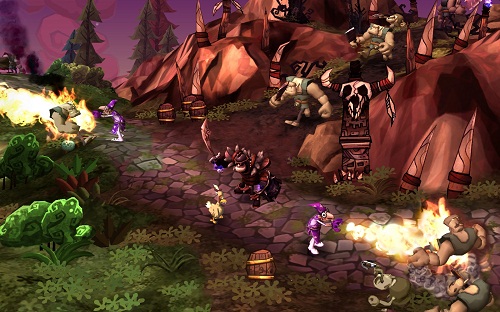 If you are reading this then you probably already know that DeathSpank is most comparable to the classic Diablo, however you cannot get away from the fact that it is the undeniable truth; you are placed in a colourfully vibrant world full of interesting characters and screwball quests, not to mention that the game is utterly full of loot. The simple bizarreness of the game sneaks up on you when you least expect it, minding your own business killing goblin type creatures is your normal walk in the park, however it's quests like having to buy a mobile phone to encourage an orphan to jump into your sack of orphans, or finding a disguise for a Leprechaun snitch that make the game one of the most entertaining forays this year.

To say that the game is full of loot is an understatement, there is so much different and varied loot in the game you will be tearing your hair out in disbelief, not only that but each item is individually modelled (so that you can see what you are wearing all the time) and has its own unique hilarious name and descriptions, and when you're holding items called the Poop Hammer or Fire Axe 2: Fire Harder you know that you are in for a treat.

A nice addition to DeathSpank is its local co-op, at any point during the game pressing start on a second controller allows a friend to take on Sparkles the Wizard to aid DeathSpank in his quest; and with an extremely handy health restoration spell you'll never want your friend to stop playing. The only downside to the local co-op is you do simply play as an aid, there are no pick-ups for Sparkles, he doesn't have his own health, and the other player will not receive any achievements for their work, however having a second player around is a lot more fun, you've just got to convince your friend to join in, even though there's no formal record that they have actually played the game at all. 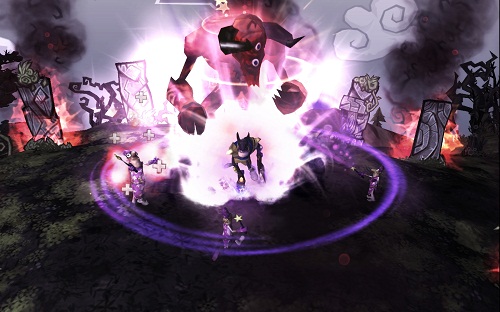 A rather strange addition to aid the gameplay in DeathSpank is the hint system for quests which works similarly to games such as the recently released Puzzle Agent or Professor Layton; perfect for the real adventure-gaming quests, a great example of which is a quest where a cog was required to get a dam working, the closest item in your inventory being a wooden wheel, it took a lot of association before you realise that if you were to drop it off at the nearby termite hill you’ve suddenly got yourself a cog. Quests such as these sprouted up every-now-and-again and although rather unexpected gave a nice breath of life to some of the other quests which are your general ‘kill x amount of x to finish quest’.

The difficulty in DeathSpank is not too high, as there is no real failure state; death merely leads to a proportion of your money being dropped and a respawn at a local outhouse. That said there are a fair amount of difficult enemies that will take more than your basic hack-n-slash technique, and in all, the combat in the game is fairly acceptable as it stands, plus with the justice meter that gives a lot of weapons very powerful special moves and the occasional runestones that allow DeathSpank to dish out some truly devastating attacks, you'll find yourself actively playing the game and not just mashing buttons!

Complete with gamer pictures and avatar awards, DeathSpank is possibly one of the best Xbox Live Arcade games for a long time, not only does it contain over 15 hours of gameplay that is full of side quests and a huge expansive map, you will find yourself hooked on the Diablo nature of just-one-more-quest for many days on end. 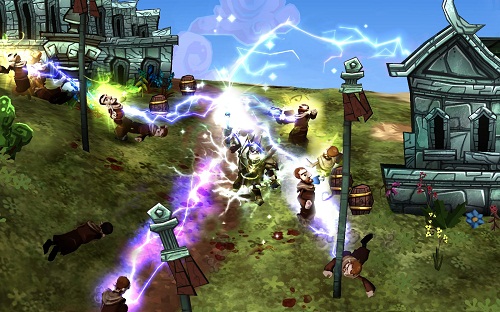 DeathSpank just goes to show, that it is possible for a game like World of Warcraft to actually be entertaining and not just a grind, DeathSpank is full of vibrant characters, art and sound, and the fantastic humour of the game only makes you wonder exactly why you still have your subscription to WoW open when there are far more enjoyable and entertaining games out there for as little as £10.

DeathSpank is available now on Xbox Live Arcade and Playstation Network for 1200 points and £9.99 respectively, if there's one purchase you’re going to make this year, make it DeathSpank, you won’t be sorry, I wasn’t!