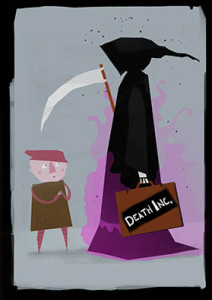 So the Death Inc. Kickstarter didn't pan out as developers Ambient Studios intended, it's alright though, because they have an ace up their sleeve that they've unveiled today!

For a mere $10 you can get in on the Alpha for Death Inc. this gets you instant access to Death Inc for Windows, Mac and Linux, as well as a pre-order for the full, finished game. Once the game gets onto Steam, you'll get a Steam key too, and because the internet likes a good natter you even get access to the private Death Inc. alpha forums where like-minded chums can discuss the game!

However, there's more on offer than just bog-standard alpha access, and there are a selection of tiers. For $15 you can get a PDF of the 'Portable Peasants' papercraft game characters, a digital PDF of the art book, and the digital soundtrack!

Did you Kickstart the game and were sad to find that you'd no longer be in the game? Well for $30 you can be named villager in the game, and chose their menial 17th century job!

Want to name a cow too? and an enemy? You can also get access to all future expansion packs, DLC and the Portable Peasants printed on high quality card, along with some awesome postcards for $50.

For $100 you ca get a lovingly boxed copy of the game including a cloth map and printed manual, not to mention a CD of the soundtrack and a lovely glossy A2 poster.

Not enough physicality yet? Well for $250 not only will you get a t-shirt, but a hardback Death Inc. Art Book and a custom designed set of Death Inc. playing cards.

If you ever wanted to own a pub... a digital pub might we add, you can do that too in Death Inc. for $500 you get everything from the previous tiers plus your own pub ingame and a custom print of the pub's sign!

However if you feel like your a big fish in a small pond, well you can purchase the Alpha access for $1500 securing you your own coat of arms and livery to accompany your castle or fort! You'll even get a character created in your likeness signed and framed as well as a custom Death Inc. writing set. But then why not go the whole hog? For $5000 you can be King -or Queen- of the World, how about that?

You can purchase early access to the game now, and get it right away from the Death Inc. website, go on, give it a play!