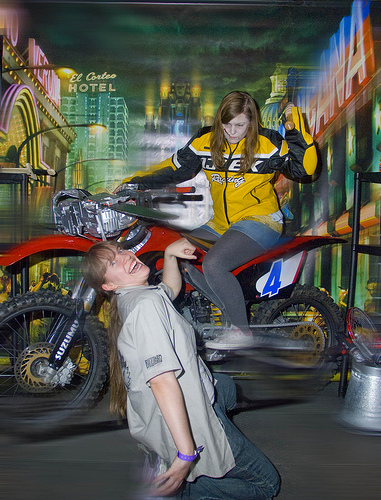 Dead Rising is back, and it’s bigger, better and with more zombie massacring goodness than you thought was humanly possible. We went down to the ‘casino strip’ of London; Leicester Square to have a look at Dead Rising 2 before its release on September 24th for Xbox 360 and Playstation 3.

An evening full of gambling and zombies proved to Gamercast that the zombie massacre genre is alive and kicking, and worth your hard-pressed time for a good sit down just to prove that you can survive a zombie outbreak with the best of them.

Dead Rising 2 breaks through the mould that Dead Rising made when it revolutionised the sandbox zombie game —by inventing it!- the hugely popular survival horror has lashed out with more weapons, more survivors, more psychopaths, and more customisation than you can handle!

Willamette Mall was massive and contained over 6 Plaza’s full to the brim with shops for your delight, Fortune City has its own Mall, not to mention many Casinos on the Vegas strip, a Hotel and an Arena, taking place over 3 days, you’ll not know what to do with yourself!

If that wasn’t enough, Chuck has an almost unlimited arsenal at his finger tips, with the combination weapons as an added bonus, every five minutes a new hilarious weapon can be found, or a great costume to wear, perhaps if you’re feeling adventurous a boob tube and high heels may be in order, just don’t let your daughter Katey see you! Not to mention that you have barber shops at your disposal, allowing you to change the colour and appearance of Chuck’s hair. 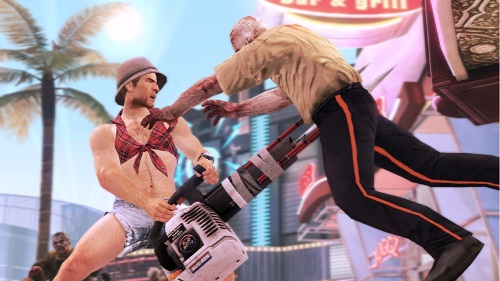 However for all of the fun hilarity, Dead Rising 2 is not for kids! Expect more gratuitous violence than before, now that Capcom boast over 7000 zombies on screen at once! That’s over 6000 more than we last saw in Dead Rising. With over 50 more characters in the sequel you’ll have survivors dropping left-right-and-centre as you attempt to save them from the psychotic maniacs that inhabit Fortune City.

Again Dead Rising seems like the perfect zombie massacre game, in the same sandbox genre that the original excelled at so well, with katanas, broad swords, tomahawks, serving trays, firecrackers, wheelchairs, you name it, Dead Rising 2 gives the player so much more to play with. Whatever you may have thought about the combinations, they are not a gimmick, and provide some of the most damaging and hilarious situations that you will find in the game.

Dead Rising 2 is pure and simple entertainment, if you don’t feel like playing the story you’ve always the option to mess around to your heart’s content, and the cathartic dream that is produced from the bludgeoning of zombies will never get old, whether it’s with a Spiked Bat, or a Foam Hand you’re looking at hours of bloody fun. 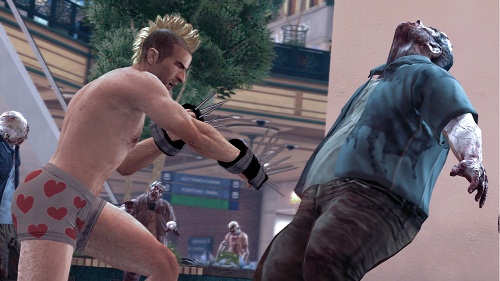 The story mode also gives a sneaky peak at the multiplayer which looks like an amazing romp, and it must be said that there has never been such care-free arcade fun as Dead Rising’s ‘Terror Is Reality’ which looks like the Running Man on steroids and is the one reason I would buy a gold subscription.