Candygun Games the Hamburg based studio are releasing their first original IP Dead Block for XBLA, PSN and PC. Set in 1950s America the dead have been risen by Rock'n'Roll music, so its up to you to survival the zombie waves in a new 3rd Person Action Defence zombie game. Basically a tower defence crossed with a 3rd person survival horror you will have to protect your characters rom the invading undead by hiding in various shelters and building blockades, setting traps or using their weapons -as a last resort of course! 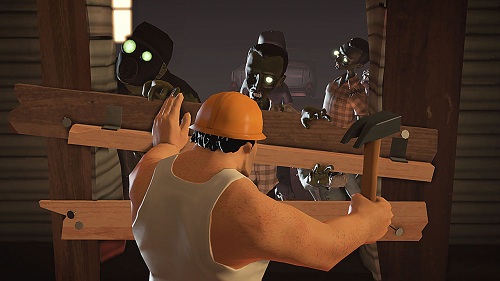 Featuring 10 single player levels, the game also offers 4-player split-screen multiplayer and an additional 8 player co-op where players can fight side by side with their friends. Built in the Unreal Engine 3 it's strategy gameplay combines with the cartoony visuals looks fantastic. This is actually a really interesting looking game, and its a damn shame there is no official date as of yet.

Dead Block should be hitting all three formats later this year. Until then watch out this nifty trailer, and take a look at the Official Website.