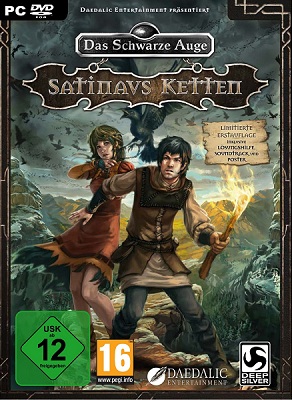 13 years ago a Blind Seer was caught and burnt at the stake in the heart of Andergast, as legends go the old man could see the future and the past, but not change the events he lay witness to. When the Seer sees his own death he sets out to change the future, but everyone, even those greater than a simple man are bound by the Chains of Satinav, and no one can change their fate.

The town of Andergast is but a small piece of a much larger picture, but even the grandest of stories must start small, and the oak leaf challenge that the King hosts whilst very simple, works as an establishing puzzle that requires exploration and combination, a perfect introduction to the game, and within a short while of completing the task Geron will be swept up into a great fantasy fairy-tale of epic proportion. 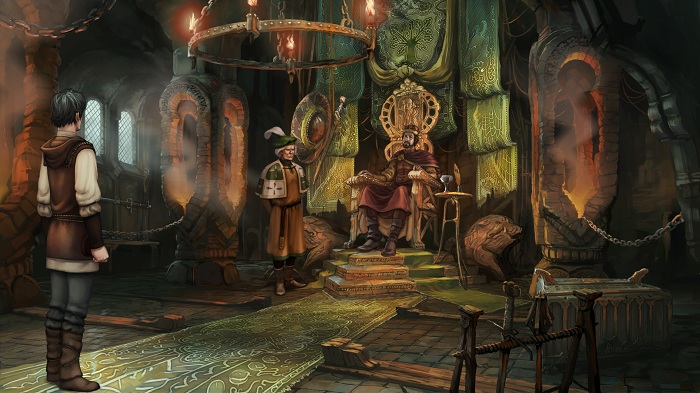 No one can save the world on their own, and just like The Whispered World's Sadwick had Spot, Geron finds his own sidekick in Nuridarinellavanda, an innocent young fairy who his stepfather Gwinnling believes is key to ridding Andergast of the plague of crows that is the start of the Seer's acts upon the town, little does Geron know that she holds a much larger part in the future of Aventuria, and the possible destruction of the world.

Things begin to get sinister when Geron is tasked with ridding the royal guest chamber of the crows invading the kingdom, and suddenly those that put the Blind Seer to the stake are mysteriously murdered, and with sad fairies that have succumbed to the darkness on his tail it isn't before long that he realises that Andergast is no longer safe for the two of them, ensuring that you'll never find a dull moment in Geron and Nuri's enchanting tale.

Possibly the most effective part of the game is the variety of environments that you will encounter, each help to set the tone of the story and as you venture into the dark and dangerous world outside of the innocent town of Andergast, you'll find that daylight gets shorter, the rain gets heavier and the inhabitants get more unsavoury as you stop in at the treacherous Blood Barrier, Swamps of Lament and the curious fairy world of Neirutvena where nothing is quite as it seems. 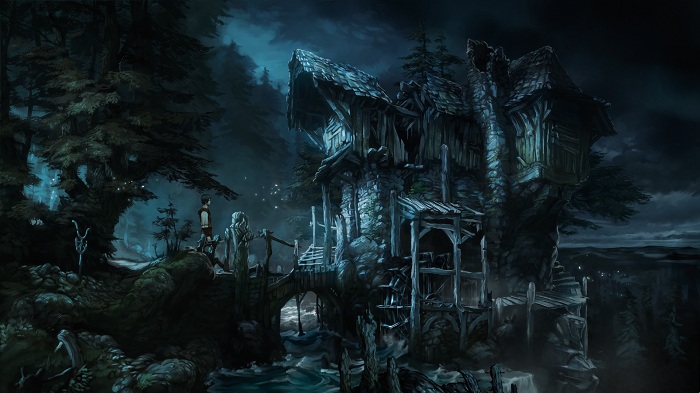 The emphasis of the game is placed on the story foremost, but as an adventure game, the real question is do the puzzles hold up? The brunt of the puzzles are made up of standard combinations, which are all fairly intuitive, in amongst them are a few logic puzzles that can be a little tricky if you do not examine all of the pieces involved, however the most engaging puzzle that you'll keep going back to is via the use of magic.

Geron himself has a bit of magic in him, and has the trivial ability to break small fragile items such as clay, glass or tired wooden supports, this talent will be used throughout the game, and when you are introduced to Nuri's own magic you have to begin looking at the game a little differently, as her magic allows you to fix the broken. The combination of the two magics is a really interesting part of Chains of Satinav, and Daedalic were smart enough to not overdo it, but put in just enough to keep you on your toes and not get bored with just combinations!

However of course if you do get a little stumped whilst trying to save the world there is a fantastic hint system present in the game that will not only bring your attention to any missed objects in your surroundings, but it hints to if there are any possible combinations with an item that you have on your pointer. Of course, if you are a bit of an experienced adventurer you can turn these hints off for a bonus achievement at the end of your journey, not to mention a true feeling of accomplishment. 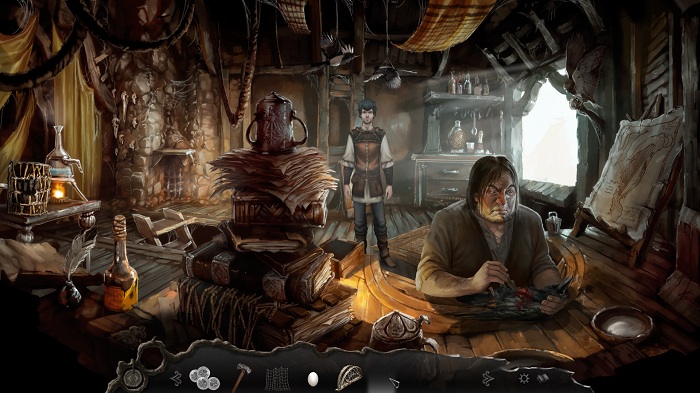 Whilst the animations are not as polished with regards to lipsyncing as in Daedalic's higher budget titles, what Chains of Satinav delivers is a beautifully 2D tale that looks as though it has escaped from the pages of a lavish art book, whilst the animations of the characters themselves are a little basic, it's the added touches on the flowing rivers, grunting pigs and breezy pennants that really bring the game to life in glorious HD; not simply with its characters but through its gorgeous fantasy settings.

For a deeply German roleplaying game, everyone in the Dark Eye universe appears to be suitably British, and whilst the voice actors are not as endearing as Sadwick was to myself, there are a few characters like Occulunculus that really shine. Whilst the voice acting does not propel The Chains of Satinav up there with the best of them it is a sombre tale, and following the many twists and turns of the story is a wonderfully composed score that evolves throughout Geron's journey and truly wrenches at your heart, especially the main theme that is so hauntingly beautiful.

Chains of Satinav is a traditional tale that contains many of the standard fantasy themes and plot points, and with so many beautifully illustrated environments, characters and situations it's easy to imagine the game as a classic fantasy tale, like a good dark film of the late 80s, and so in true form, the game is complimented with a bitter sweet fairy tale ending, that is so fitting for the game you'll just want to have a good cuddle up after its completion. 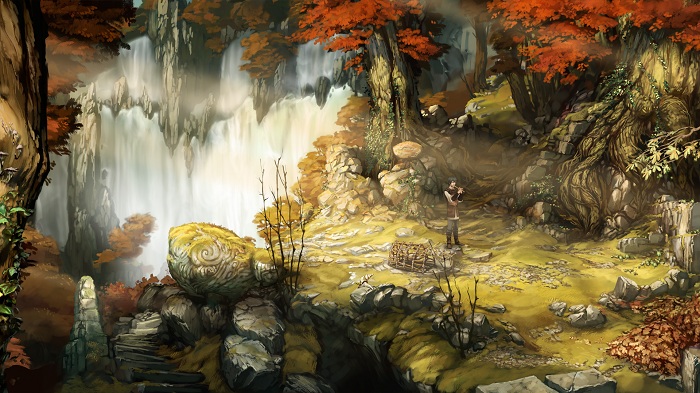 With the Dark Eye name on the title many may be deterred from the idea of entering a fairytale world that they are unfamiliar with, however Chains of Satinav manages to indulge those accustomed to the lore and those that have only just discovered it; with off-hand curses and prayers to the 12 gods you needn't know anything on their meaning, and yet those well-versed in the universe will recognise names, faces and locations.

The Dark Eye: Chains of Satinav is a beautiful and engrossing fantasy tale, and one that you'll want to see out to the very end, its clever use of magic in puzzles and brilliant hint system will appease the diehard adventure gamers and those simply looking for a good story that'll last with you for an age.

Chains of Satinav is available now on Steam for £29.99, if you're looking for an absorbing and interesting adventure game, look no further.