2185 is the year that Earth as we know it is destroyed, and mankind’s attempt to separate good from evil collapsed when the New Australia prison colony on Mars stood united and vowed vengeance on Earth leading to its destruction, in Darkstar: The Interactive Movie.

There is still hope though, in 2499, The Westwick is the last piece of the human race, it is one of a convoy of ships still remaining, to perform what would be Earth’s last hope at stopping themselves from making the same mistakes again, this would be achieved with Darkstar, a black hole of sorts that was discovered could allow ships to travel back into the past, giving the human race one last chance. 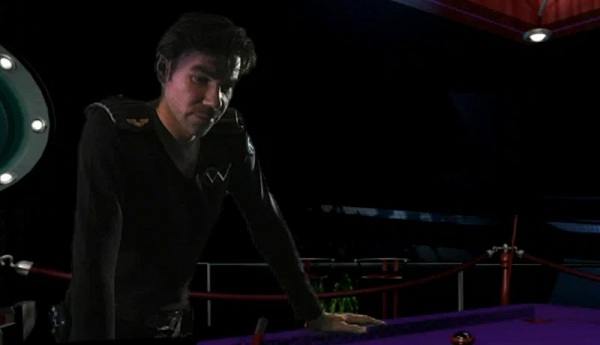 The only trouble is something in your plans went terribly wrong, and you awake from a 312 year sleep with hibernation induced amnesia caused from a level 3 hibernation mode. As acting captain John O’Neil you’ve no idea what is going on, who you are, or what you are even doing aboard the Westwick, all you can tell is that of your crew of four; one is missing, one is dead, and the other cannot be woken from hibernation.

Darkstar is as much an adventure game as it is an interactive movie, and it uses the famous panoramic nodular system of point and click greats like Myst, not only does it use the same system, Darkstar is at heart an exploration game. Whilst the narrative does push you in the right direction, nothing is truly blocked off from you, and whilst the game does reward the observant, there is always a hard way and an easy way to open certain doors and solve puzzles, even if it means producing the large number of code variants for a door sequence. It’s not all pointing, clicking, codes and numbers however, and there is a great selection of simple intuitive puzzles, and then there is the labyrinth, and we will not speak of it again.

After some exploration of the ship you’ll shortly find that the Westwick is in Emergency Lockdown due to a punctured coolant tank that has forced the ship into a slow drift towards the nearest planet Theta Alpha III, a planet, conveniently rich in water, perfect to fill up the leaking tank with. However if your objectives were that easy Earth would already be saved and you’d be living the good life in the past, in order to get to the planet you need to use the remaining shuttle that cannot be used until the Emergency Lockdown is rescinded. To take it down all you need to do is locate the ten biolok’s situated around the 4 levels of the ship, simple enough? On your journey you’ll uncover what really happened aboard the Westwick, because it is nothing like what you have already assumed. 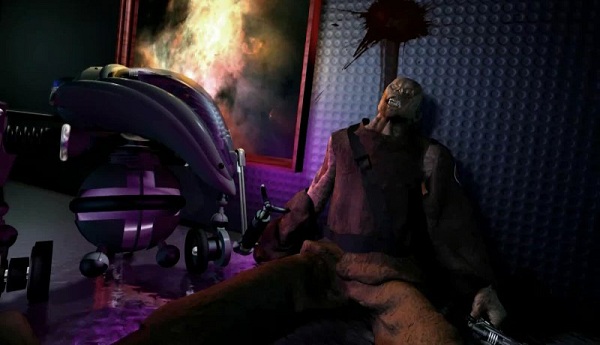 Darkstar is an oddity in the gaming world, and is a throwback to the Full Motion Interactive Movie games of the nineties like the X-Files, Night Trap, Double Switch and the beloved Tex Murphy series. Long gone in the mainstream circles, Interactive Movie’s still linger about like the recently released Survival 2: Get Lucky or Mystery Case Files: 13th Skull. Unfortunately making Full Motion Videos are too costly and time consuming; Just ask Darkstar’s development team; J. Allen Williams, it took him over a decade to create the 13+ hours of cinematic loveliness before you.

A Full Motion Interactive Movie would be nowhere without its cast, and Darkstar includes one fitting of its own cult status; and includes more than four of the MST3K crew and narration by the late Peter Graves’ whose soothing voice will literally give you goose bumps.

The game is not simply live action however, and all of the sets are CG which all adds to the very 90s science fiction aesthetic that starts with the Westwick’s uniform, to the style and interiors of the ship, it is no wonder the game has such a cult following with the beautiful homage it paints to both science fiction and FMV gaming as a whole, and just like a good sci-fi tale you very shortly get to the point where you are so involved in the story that you will want to finish the saga to find out exactly what went on aboard the Westwick, and indeed what becomes of earth. 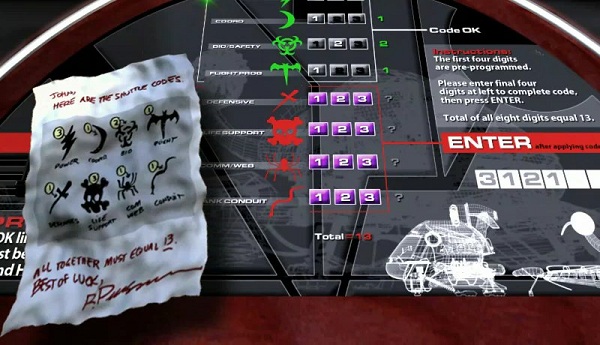 Now the true fun of a FMV game usually comes out of comedy, and whilst Darkstar is a pretty serious game, there is a lot of fun to be had in what they like to call ‘taking the easy way out’ or ‘ignoring the road signs’. There are a multitude of endings to the game, and a lot of them do not involve getting anywhere near to finishing it; the best are from doing the most idiotic of actions; touching things that tell you not to, investigating exotic looking plants, or evacuating the ship knowing there is no civilisation around for millions of miles. These ‘endings’ are a brilliant touch to the game, and shows that Parallax did realise what they were making when they set about developing Darkstar.

Alongside all the action that takes place in your ship, Darkstar also contains a rich backstory of mankind’s predicament, which are tied to the bioloks throughout the game, find a new biolok and you unlock a new chapter on Earth’s plight. These cinematics are fantastic, and running at around 44mins in total you are literally being handed a little movie inside of your game, various scenes will remind you of good old Command & Conquer, and these chapters are indeed one of the best features of the game.

With very few people to encounter on the ship, some of captain O’Neil’s acting can seem a little hammy at times, whilst the personal com units found in the crew quarters show a much richer side of the story with conspiracies, secrets and conversations, yet when the amnesia sets in it appears to strip him of all of his astuteness, and causes him to look at the most harmless of objects in a bizarre way, rub his chin and look perplexed, of course Live Action acting for video games has never been critically acclaimed, but unfortunately these short stings presented when you investigate certain objects just seem out of place in an otherwise impressively acted setting. 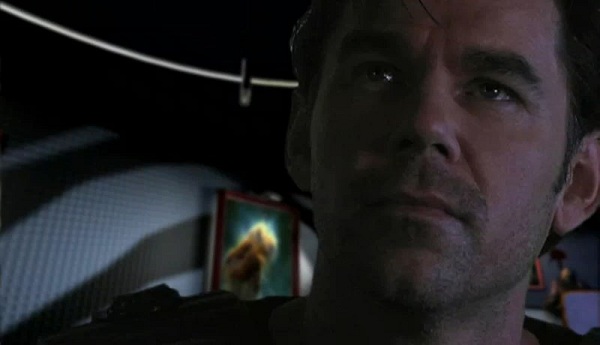 Surprisingly enough the two best characters in the game are the two wholly modelled droids; MAGS and SIMON two fantastic sentient beings with their own opinions and humorous dialogue, they are the stereotypical wise cracking robots, absolutely perfect in the situation, and exactly what you need after roaming the ship alone for a few hours.

Now whilst the game is a loving send-off to a bygone genre, it is unfortunately not without its faults, for a game made in the current generation, there are no closed captions, and often O’Neil’s mumblings come off unheard. There’s also a general fault of adventure gaming in Darkstar that often requires you to give pixel perfect clicks, and this is when you can actually figure out what you should be looking for. Whilst the game is based around exploration, there are far too many buttons and switches hidden away in nooks and crannies that the player would not suspect held anything, and to make matters worse a lot of the switches activate power in areas that the player is unaware of, especially confusing when the area in question states ‘access denied’ and not ‘no power present’.

Darkstar is as cult as a sci-fi obscurity can get, which is pretty big. Not only does it cater to the FMV crowd, but its cheesy science fiction is lovingly adored in droves, heck we love good old science fiction at Gamercast! Whilst it has its problems if you love the genre and the subject matter, Darkstar will be one of the best games you’ve played all year. So drag out the pen and paper, sit back in a nice comfy chair, and prepare to be entertained.

Whilst the game was released back in 2010, its refreshing take on the Live Action adventure game was brought to UK retail shores thanks to Lace Mamba Global, and is available in all good stores and online retailers as a Deluxe Edition that includes the 2 disc soundtrack, Windows and Macintosh versions, a lovely full colour manual, and the Darkstar production book on PDF. If you want to get totally caught up in the Darkstar phenomenon there is also a range of memorabilia and merchandise available on the Darkstar website.