In DARK you play as Eric Bane, a recently turned vampire, who finds himself awake in the very purple night club The Sanctuary, he's lucky to find more than a couple of vampires reside there, even better they're pretty friendly and more than happy to explain his unfortunate turn of events. The problem is Eric is only a half-vampire, as his sire did not let him drink their blood, and if he doesn't manage to drink their blood soon enough, he will become a feral ghoul and lose his mind, trouble is he doesn't remember anything before waking up which begins his journey into the dark, shadowy underworld where he comes to the realisation that vampires appear to rule the city, however no one is untouchable.

DARK is treading on dangerous ground after the atrocities that Twilight brought to the much loved creature of the night, however it's great to see a game taking them on, whilst it's no Vampire: The Masquerade Redemption or Bloodlines, what DARK delivers is Vampires of the late 90s, very much influenced by Blade, and comes with all the leather clad bodies that you can imagine. However for all the cool points it scores with Vampire fans, it loses a few in what I can only hope is translation, characters say some pretty hammy dialogue, and whilst it tries to be cool and edgy, you end up with Eric sounding like he wants to be Max Payne, and some of his vampire chums sounding very awkward, I'm looking at you Tom. 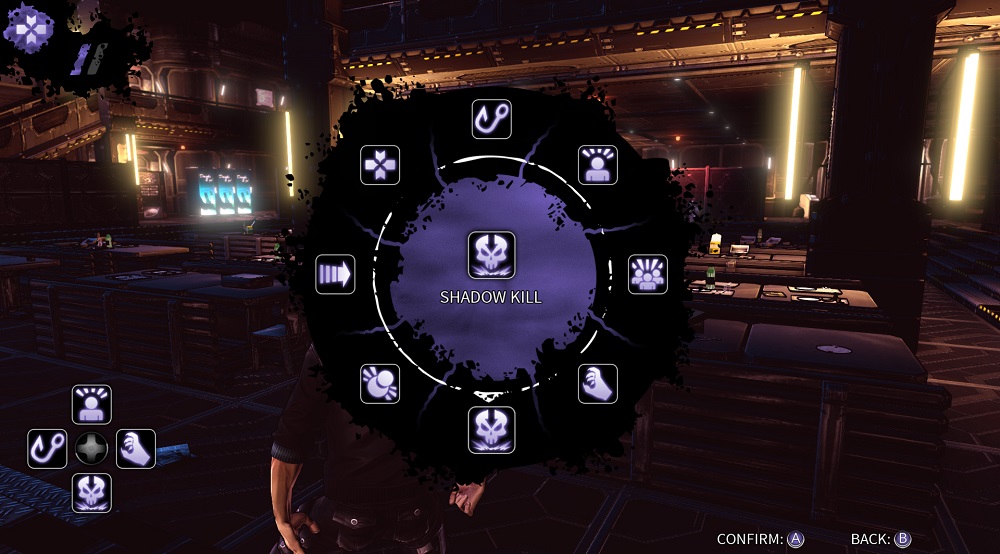 DARK is a game from the stealth genre that has suffered somewhat recently, with most of the stellar titles in the subgenre turning to action, instead DARK inserts an RPG-based skill tree, a bit similar to Deus Ex, except in Deus Ex you have the optional elements of ranged weaponry, you won't have that luxury in DARK, in fact, DARK is unlike any other stealth game currently on the market, because, apart of your short range Shadow Grip skill, you will not be able to kill your enemies behind the safety of a cover-wall, instead you must skulk around a level, learning patrols and take down all of your foes up-close and personal, because a Vampire doesn't stand much of a chance when he's being pumped full of bullets.

You'll have a lot of 'cool vampire shit' at your disposal, including the Detective mode style 'Vampire Vision' that slows down time and allows you to see the heat signatures of nearby enemies, which actually makes a lot of sense as a blood thirsty demon, to which we give DARK credit. Other offerings come from the skill tree's range of abilities from simple distraction techniques to new forms of takedowns, like the Shadow Grip that allows you to 'Darth Vader grip' unsuspecting nearby enemies, or the Shadow Kill that lets you take down an enemy whilst Shadow Leaping to their location, there are also a number of passive skills concerning your blood points, health and general stealthing ability that can be upgraded, the skill system works very well, and fully upgrading an ability like Shadow Grip will allow you to take down a foe 15m away, and destroy the evidence too, so they do make quite a difference.

Now these powers may seem a little overpowered? Well there's a catch, because every vampiric power in your possession uses up a blood point. Blood points are obtained by drinking the blood of your enemies, which isn't quite as easy as it sounds, as you'll need to get up close and isolate singular enemies, or you'll run the risk of being seen and heard in the act. At the start of the game you will have a maximum of two blood points to your name, however much like your powers this can be increased, and you soon forget about the bad times where you could only pull off a couple of Shadow Grips before needing to down some more blood. 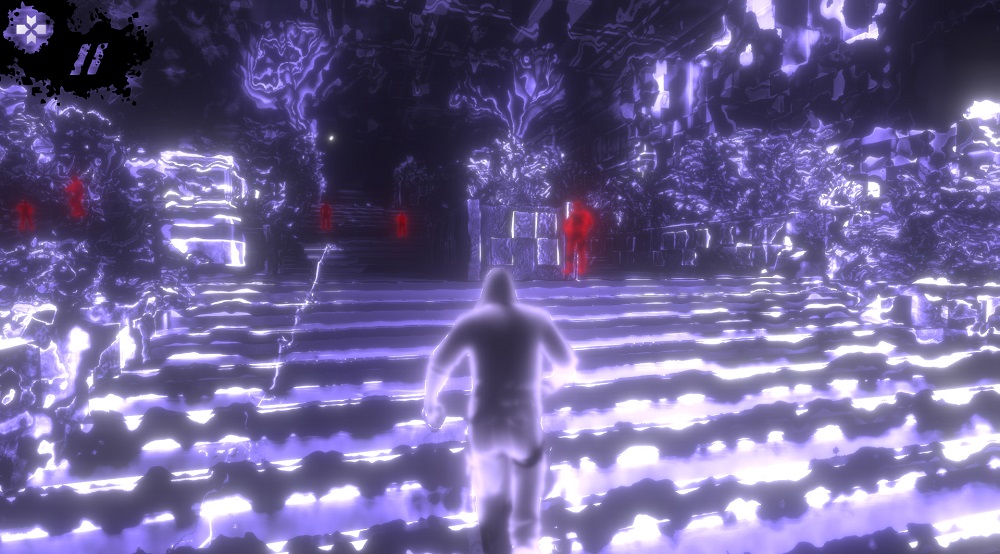 Now the best non-lethal skill in the game is Eric's Shadow Leap, think of it like Harry Potter's Apparate or a short range teleporter that allows you to zip to any location or cover within range, like all of his skills, Shadow Leap starts off very limited, however after upgrades it will allow you to skip unnecessary fights, surveillance and motion detectors in a flurry of smoke, it also looks pretty darn cool, however as the skill starts with a ridiculously slow cool down, you'll have to wait half a minute between location hopping. It's also very tricky to get Eric to leap to the location you want, as the destination marker appears to magnetise to nearby spots, leading to a fair amount of frustration as you attempt to pick your sweet spot.

Like all self-respecting stealth games, DARK rewards the vigilant silent assassins amongst you, bonus XP is awarded for reaching your current waypoint without raising an alarm, and in order to keep you on your toes, as you develop your vampire-skills so will those you're up against which means motion detectors, cameras and the usual culprits of broken glass, stray bottles and the like, however their placement seems a little strange considering that Eric's main ability allows him to leap from location to location, making any form of detection inadequate, if anything the game simply gets ridiculously easy.

What's important to note in DARK is that you start off as a rookie vampire; everything is frustrating, and your skills are pretty pants, but as you grow, and upgrade your abilities you get to the 'bad ass vampire' that you always wanted to be, the only problem is you've got to wait it out, and DARK is a bit of a slow burner in this respect, so those that have little patience may find themselves quite frustrated when they start playing for a few reasons we're about to get to. However when you hit the half-way mark you'll find that the game doesn't exactly scale; enemies do not get any more intelligent or harder and levels get easier and easier, so much so, towards the last area of the game you'll have unlocked practically all of your skills. 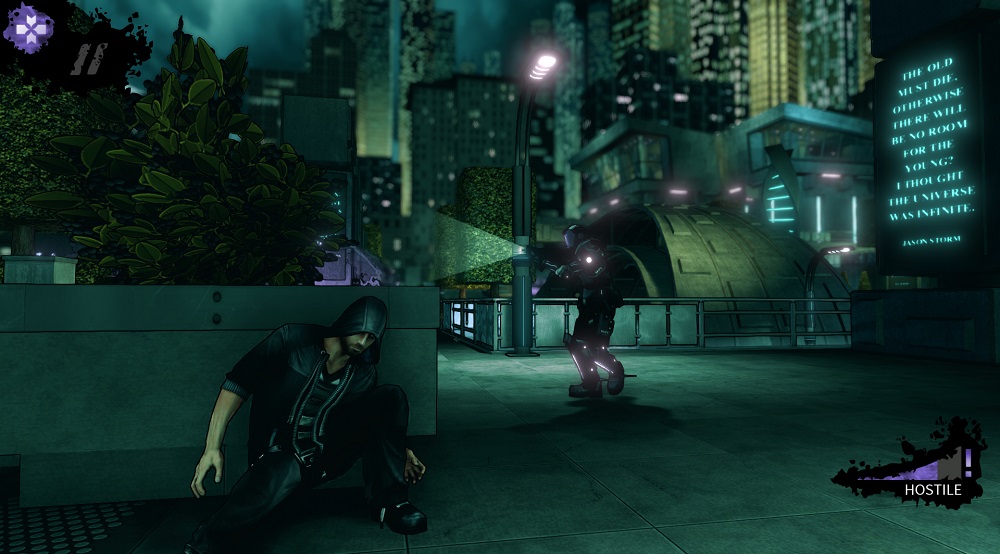 As much as we came to enjoy DARK, unfortunately it falls flat in its execution, as a fundamentally stealth orientated game, you'll find that enemies won't see you through glass cabinets, ironically considering the name of the game, shadows mean nothing, and your visibility is determined by if you are clinging to a piece of cover -in some respects regardless of whether or not you are actually visible.

Alas we are given stealth mechanics that games have shown us for the last generation or so, alongside this the AI on the hordes of enemies in each level is terribly frustrating, patrols cannot be depended on, sometimes leading enemies to stand stationery in a position that you simply cannot get past without alerting a dozen others, and their field of view appears inconsistent with some enemies having trouble spotting you as stand a metre away in plain sight, and others spy you from halfway across a wide room, the cool aspects of being a vampire begin to wane when levels become trial and error.

DARK is by no means the next Vampire the Masquerade for the loveable creatures of the night, if you can deal with some hammy writing, and the frustrating start, DARK is an enjoyable addition to the stealth genre, just don't go expecting a revolutionary game, it does have its flaws. Despite the introduction of new enemy types, environmental pieces and your skills, DARK manages to get somewhat repetitive as you work through the levels, tasked with far too similar scenarios in very basic setups. It may not be reinventing the stealth genre, but it gave a good fight.

DARK is available now for Windows PC and Xbox 360.