Kalypso Media have confirmed a release date for the upcoming vampire-stealth-action DARK from Realmforge Studios, unfortunately you'll have to wait a little longer, but it does mean you can come out of the sun, into the shadows and initiate stealth mode!

DARK will be coming to Windows PC via digital distribution channels such as Steam where it can be pre-purchased now for a release June 28th. For those that like their releases physical, or perhaps on console you'll have to wait a little longer, as the retail version will be hitting Xbox 360 and Windows PC July 5th.

The game focuses around Eric Bane an innocent bystander who gets taken into the vampire underworld, trouble is he doesn’t remember the events leading up to being turned, but he’s told that going after the mysterious GeoForge Corporation will answer some of his questions. Pre-dominantly a third-person stealth game, DARK focuses on its story and hopes to engage players into its unique world whilst using some pretty interesting skills to move around undetected, you’ve now seen a selection of them, how much do you want to stealth around a level in the blink of an eye in a puff of smoke?! 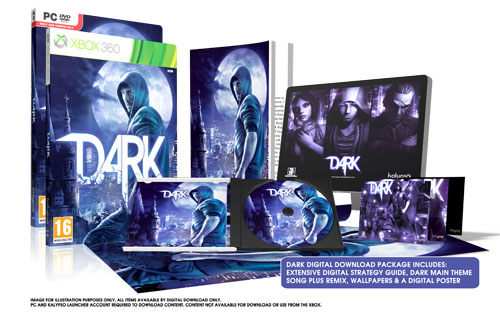 DARK is currently scheduled for a release June 28th on digital platforms for Windows PC and June 5th for retail on the Xbox 360, and Windows PC. If you want to get a few extras with your game why not pre-order from Amazon for some digital bonuses.