Paradox Interactive have announced another new expansion for the prolific Crusader Kings II that answers the question you've all been asking — what would have happened if the Aztecs invaded 13th Century Europe…. Wait, what?

For the first time in the series’ existence, Paradox Development Studio have decided it’s about time to introduce a fantasy scenario into their much-loved strategy, bringing the savage, blood drenched Aztec civilisation to the European shores with their vengeful gods, and bloody rituals. 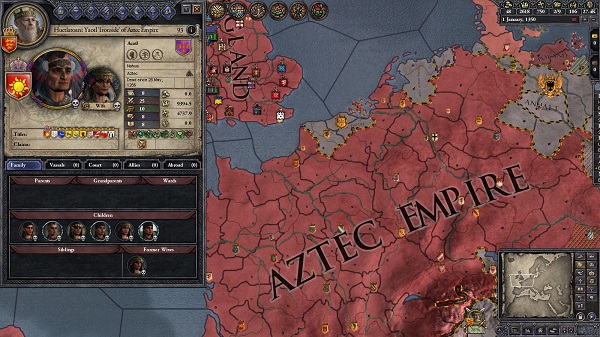 Their invading threat arrives at a random point in the mid to late game bringing with them exotic and deadly diseases, units, culture and human sacrifice!

Crusader Kings II: Sunset Invasion is scheduled for a release November 15th 2012 on all major distribution channels for $4.99, we aren't sure how we feel about the inclusion of fantasy elements in such a deep strategy focused as much as possible on historical accuracy, but it may pose as a new twist on the existing expansions.