Sick of ruling the world, fed up with commanding a nation to war, well there’s one grand strategy that may be right up your alley! Crusader Kings II says no to cookie cutter strategy and yes to a more personal, and engaging strategy that develops into a unique and fascinating story as you play. Rather than give you a feature by feature low-down of the game, we’re going to tell you a story. 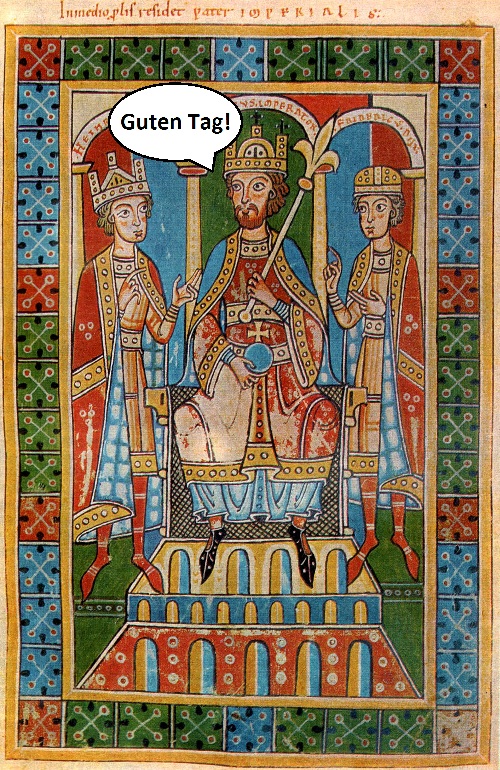 Say hello to Kaiser Friedrich I of the Holy Roman Empire. The Kaiser is an easy character to start with, and he’s by no means a spring chicken, you'll take him on at the ripe old age of 65; already laden with five sons, your dynasty has a wealth of choice in regards to a suitable heir.

Crusader Kings II is more of a strategic soap opera than a realm of battle; your greatest victories are won with social manipulation rather than bloodshed in the heat of war. Instead of fretting over how large your army is, it is far more concerning that there are vassals in his realm with worrisome lines of succession. This could see precious titles passing from your realm to one of your less trusted adversaries.

However with a man as persuasive as the Kaiser, titles can be guaranteed with relative ease, simply inviting an heir to your court, or even going so far as to arrange some matrilineal marriages could be the difference between your dynasty crumbling or remaining a strong force in Medieval Europe.

Whilst the Kaiser of Germany is a bad example to start with, what makes Crusader Kings II different from your average grand strategy is rather than give you rule of a nation, you are set to lead a dynasty, even a small family through an individual from any date beginning with 1066 to 1337, and you will control this dynasty up until 1453, a year that is often cited as the end of the Middle Ages. How on earth does someone live so long, I hear you say? The answer is succession.

Succession is a key element in Crusader Kings II, and if you play your cards right, and prevent the weak heirs from inheriting your empire, you’ll have centuries of ruling a triumphant dynasty. However if you let that bastard child whose a bit of an ill-tempered drunkard succeed you, well, you may just ruin your chances of survival through the next decade rather than the next century. 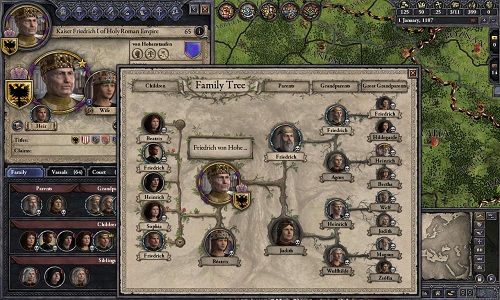 Shaping your dynasty to your will is not as easy as it sounds with Kaiser Friedrich; his five suitable heirs were looking very similar early on in his lifespan, however it is important to begin considering an appropriate heir, after all at 65 years old, he is already well past his prime for the Middle Ages! Although a hunchback, Prince Friedrich seems like a good strong contender; his strong morals and martial prowess could see him as a formidable successor, although it’s not before long that others see him the same way and a plot is drawn against him.

Plots make a large part of the game, and you will often be informed of them forming in the midst of your realm, thankfully the Kaiser has his fingers in many pies, and a plot can be disbanded with a simple request. Of course rather than go about it civilised, you can always hunt down those that formed the plot, have them arrested or worse; wage war.

War is not encouraged in Crusader Kings II; in fact it is more often your last resort, war is costly and long, and unless you have the power to back the raised levies of your kingdom, you’ll be knee deep in occupation with no option but surrender. Whilst the Kaiser has plenty of military power, we like to think that in his wisdom he chooses to win disputes with his words. 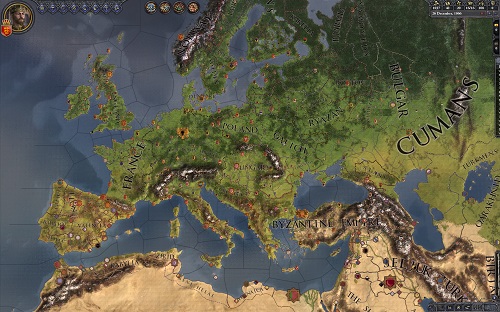 However when an old friend requests his help in a plot, he acts without question, and unknowingly we have begun a French Civil War. Too focused on war being waged against Philip I of France, during the heat of battle suddenly his favourite successor to the throne; Prince Friedrich dies at the young age of 23, and our hearts fall as to whether our dynasty can still remain strong, with the only real contenders of a successor being Konrad and Otto, a dispute succession begins.

In amidst all the turmoil Duke Simon II; the Kaiser’s nephew sees Otto as the strongest of the two and attempts an assassination. Despite his best efforts, Friedrich is unable to end the feud peacefully, and it boils down to a long and hard war. Simon's efforts were fruitless, and under the vengeful might of the Holy Roman Empire Duke Simon II’s forces are obliterated and he is quickly imprisoned.

Duke Simon II is not the only casualty in this family feud; during the chaos, Friedrich’s third wife dies at 38; however being a paranoid, drunken glutton it’s no surprise really, Friedrich remarries without hesitation, and surprisingly produces another two children before Kaiser Friedrich I of the Holy Roman Empire dies an honourable death at 75. Succeeded by the favourite; Otto IV, the question is, how long can Otto last with his brothers already plotting against him? 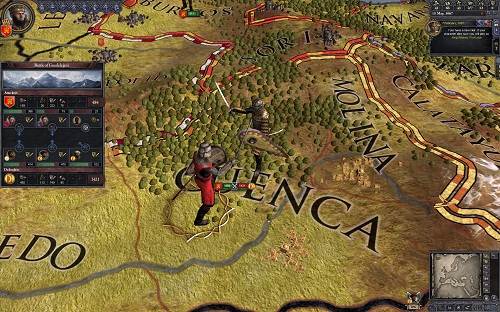 Our time with Kaiser Friedrich was an enriching experience; in crafting our own tailored historical story we got involved in a large family that at one time ruled the Holy Roman Empire, and as Friedrich's life moved on, so did our tactics, we became more engrossed in the little things; it was worrying that his courtiers were slowly dying out, and how those around him bowed to the seven deadly sins so easily, so much so that in his later life grew ever more pious. He also began to enjoy throwing lavish banquets and grand summer fairs, after all, everyone will remember the benevolent leader than those that took their people to war at every avenue.

This was merely a chapter in the tale of Kaiser Friedrich I of the Holy Roman Empire, and it well exceeded the playtime that most recent games deliver. However what makes Crusader Kings II so enthralling is that your choices throughout the game will make an entirely different outcome on each play through, and with a possible 271 years to stomach, a sitting can last a veritable lifetime. You also needn't play a character as strong as the Kaiser of the Holy Roman Empire, surviving your dynasty would not be as easy, but picking a lowly count can make for an even more cutthroat story.

Crusader Kings II is the thinking man’s strategy; why spend your time and resources going all out to war or planning a rush attack when simple diplomacy can dispel the nasty affairs going on between neighbouring provinces. It also hosts a variety of new features to it's predecessor including buildings; as seen in Sengoku, five feudal ranks including Barons, the ability to properly control your militia, real tasks to give your councilmen and so much more, the game is so huge it is impossible to cover in a simple preview! I haven't even commented on the beautiful map, the magnificent score, nor the fact that this is one of the most engrossing and unique strategy games to grace the platform for many countless years.

Crusader Kings II is scheduled for release 7th February 2012 with endless thanks to Paradox Interactive, and it will be getting both a retail and digital release by means of the usual portals, if you lost countless hours to Crusader Kings, I Apologise but you’re going to have to prepare to give up your waking life once more.

You bet we'll be reviewing Crusader Kings II for release, and who knows, maybe you'll hear of the tale of Otto IV.