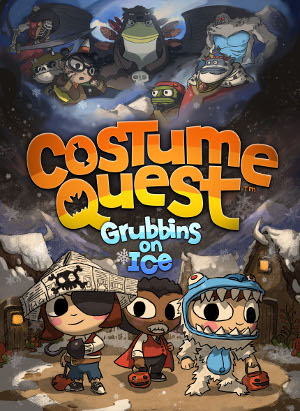 Back in October the most adorable and charming game was released, and everyone rejoiced, however after about 6 hours it was all over and done with, and with little else to do players focused on other things, nice things like puppies, and cheese. But rejoice once more you can, because there is an addition to the story of Costume Quest, Grubbins on Ice!!

Your adventure begins when one of your new friends Lucy manages to get sucked through a magical portal and is captured by the newly appointed monster leader; Araxia who has overthrown the monster elders. So with Everett and your twin you will need to ally with your former enemies in order to save Lucy and restore peace to the monstrous realm.

Grubbins on Ice takes the main features from Costume Quest and improves on them slightly, such as the frame rate, as well as a new save feature that allows you to save on your own accord, as the original save functionality was slightly confusing for players. There is also the ability to pause freely throughout the game, which didn’t allow you to pause through cut scenes originally, otherwise on a whole the game works almost exactly the same as the original.

Of course, there is one big difference.. it's not Halloween anymore, however to counteract this, you are no longer trick-or-treating collecting candy from houses. Instead you helping the Repugia revolution, so in an attempt to overthrough Araxia you will need to taked donations of candy to help.

As you would expect, Grubbins on Ice is as charming and adorable as its predecessor, and simply adds a little story onto the end of where Costume Quest last left off. Unfortunately Grubbins on Ice is no longer than the original, and is particularly easy to zap through. However if you did enjoy the Costume Quest despite it's short comings then you will not be disappointed with Grubbins.

The most important and best addition in Grubbins on Ice is of course the new costumes. The game features three new costumes to explore Repugia in; the Pirate, the Yeti and the Eyeball Costumes. Just like the costumes in the original they all serve their own specific purposes, either for progression through the game or to further the story, they also all have their very own special moves for combat which rival the fantastic All Hallow's Eve from the Pumpkin costume. 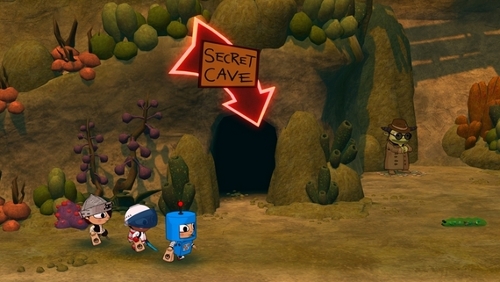 The Pirate costume is possibly the most important costume that you will receive, not only will it allow you to gain access to secret areas, but its use is required to reach a important character in the story. His special move Dead Men Tell No Tales is extremely effective, and crams about as much piratey goodness as you can in the five or so seconds possible.

The Yeti is a relatively important costume, however it feels somewhat feeble compared to the Pirate, as its use is only required once to progress the story, however it's special move is great for protecting you during the final battle of the game, as it shields all three of your characters at once.

Then there is the Eye-ball costume that allows you to zoom the camera out in order to spy any secrets that you may have missed, whilst out of battle it isn't very effective, during battle is where the Eyeball costume excels. The Eyeball costume has taken the prize for best special move ever! Just trust me, and check out Eye-agra Falls, its totally amazing! There is also a small collection of battle stamp and collectable cards back in Grubbins on Ice however they don't really seem as big as they did in Costume Quest.

Although its pretty short and will only last you a dedicated evening, Grubbins on Ice is another enjoyable little piece from DoubleFine Productions, if you enjoyed Costume Quest and wished there was just a bit more, then pick up Grubbins on Ice now, it is worth it alone for Eye-agra Falls!

Costume Quest Grubbins on Ice is available now for Xbox Live Arcade and Playstation Network for 400MSP and £3.19 respectively. Bonus points if you find the reference to Stacking their next downloadable title.