From the creators of East India Company, comes Commander: Conquest of the Americas a new mass trade strategy title that asks you to bring their nation to glory for the control of the New World, generally there is no story per se in the game, like most titles in the genre instead of giving you a story to follow, you are tasked to create your own by commanding one of seven nations. You are given the choice to control the high seas of the New World through the eyes of the British, the Dutch, the French, the Danish, the Spanish, the Portuguese and the Holy Roman Empire. Each nation brings with it its own traits and particular bonuses. As it is with most titles like Commander: Conquest of the Americas or all games from the period every gamer has their favourite nation, being rather British Gamercast quite predictably chose to command the British nation to power in the New World, we were not disappointed. 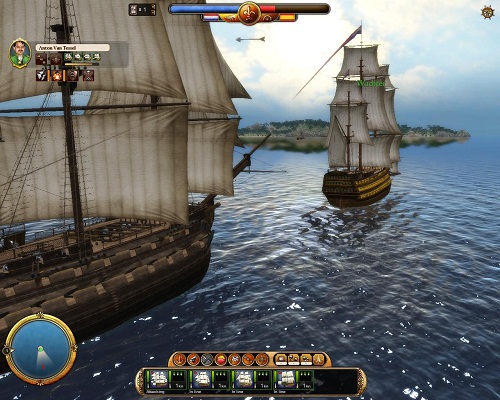 The game does suffer very slightly from a lack of a tutorial before playing a single player campaign, there is a very informal introduction to the game, however there is no real additional help for you along the way, the game does take a little getting used to because of this, but as soon as you begin sending your fleets to collect colonists from your home nation and establishing trade routes you'll find that you are a pro at colonisation.

The only small issue with the game, -and it is very small- is that there is no real indicator of how building constructions are faring, for instance you can choose to construct a building, however there will be no indicator of the progress on the building, and you will only be informed exactly how long the construction will take, so you’re rather in the dark about the matter until the message arrives in their inbox informing you that the building is complete.

If you have never come across a trading game before, surely you will of heard of Elite, or perhaps Freelancer, in a similar fashion to these classic titles Commander: Conquest of the Americas focuses on your trading prowess, and asks you to build an empire through trade in the bountiful resources that only the New World can produce. Of course the ultimate goal is of controlling the New World which along the way may mean taking over other colonies, but the prevalence on protecting your precious trading routes from blood-thirsty pirates is always key. There is of course also a heavy reliance on levelling your colonies, it is of high importance to make sure that one day, your lowly tobacco leaves can be made into cigars, because most resources sell at a very low price, and without the evolution into more luxurious items you'll find your colonies rather miniscule in comparison to what it could be. 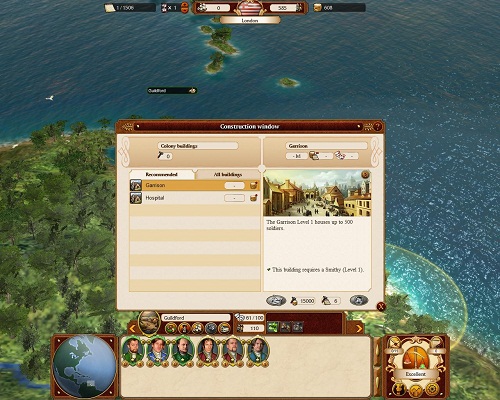 The advisors present in the game are somewhat reminiscent of the advisors that Sim City 2000 employed, informing the player when they are on the right track, occasionally dishing out rewards, and getting down-right angry when certain advice is ignored, however they act as a guiding hand which comes in handy when it is not obvious what the next step should be in progressing your colonies.

The only real trouble with approaching a title like Commander: Conquest of the Americas is that you will need some prior knowledge of ships from the era, or it will take a little getting used to the different varieties of merchant ships, the different speeds not to mention how much defence each ship has, these are of course all explained to you via stats, but it can get a little daunting for those uneducated in the field of ships. However thanks to the Battle and Quick Battle Modes you can discover the seaworthiness of each vessel at your disposal with ease, and the satisfaction that it won’t cost your colony a penny!

On a whole the game is a little slow to begin with, but as soon as you get your trade routes rolling, your colonies begin growing hugely before you know it and your sphere of influence will grow across the New World. With such beautiful ship combat rivalling that of the hugely popular Sid Meier's Pirates you'll find yourself engaging with every battle you come across just for the experience; Nitro did however add in a handy auto-battle just encase you get tired of crushing your pitiful enemies with your monstrous galleons. 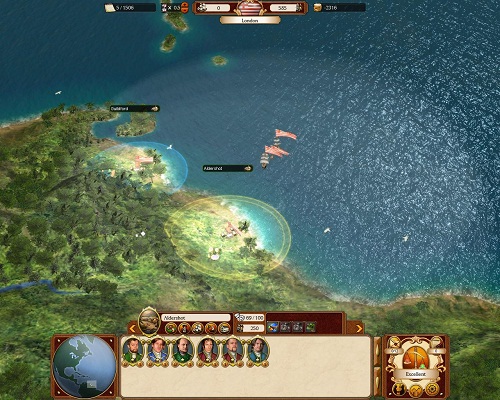 Commander: Conquest of the Americas is a very well-polished trading title, with fabulous sea combat, and an extremely intricate trading system you'll be hooked on one or the other, fans of trading games will be greatly pleased with the title, however those that have never ventured into the genre may feel a little lost and isolated. Nitro Games know their element and it is very obvious in Commander: Conquest of the Americas.

Commander: Conquest of the Americas is also available now for the SRP of £34.99 from all reputable digital distribution channels for Windows.