Comic jumper is the newest title from Twisted Pixel, the comic geniuses behind Splosion Man, and The Maw, however their newest title is more of a cross between a side scrolling platformer and pretty much every genre and gameplay style possible. Comic Jumper is definitely a very different direction for the developers whose previous games have contained little dialogue in comparison.

In Comic Jumper you assume the role of Captain Smiley, an all out comic book super hero who with his sidekick Star -an abusive and captain-smiley-hating Star attached to Captain Smiley’s chest- plan to take the comic world by storm with their first issue. However unfortunately it is a bomb, and readers around the world are disgusted with the useless comic adventures of the hero that achieves practically nothing interesting.

However the kind people at Twisted Pixel have struck a deal with the down-and-out hero, to give him guest appearances in other comics to rejuvenate him to readers and give him the chance of a comeback, so you will be required to jump from comic to comic in order to make enough revenue to start Captain Smiley back up and running. 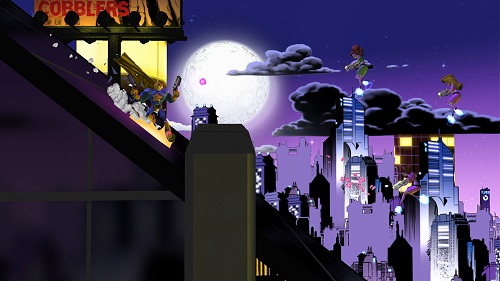 Most of the game is made up of main missions to boost his popularity, and bank flow, and these are also complimented by the readership challenges that can be found throughout the missions. Aside from the main story you will also activate challenges to bring in some extra money, these will include destroying all of the enemies in a level, to finishing a panel without being hit once. All of the money that you rake in can be put towards upgrades to Captain Smiley’s suit and bonus materials such as concept art, comic book covers and model renders.

Alongside Captain Smiley is the usual rag tag bunch of sidekicks, enemies and the like, such as Brad your arch nemesis; the possible love child of Dead or Alive’s Zack and Duke Nukem. Brad is a big buff dude, and hates Captain Smiley, and with his Brad Bots; his own female robots that fight for his affection, and he hopes to wipe Captain Smiley away, Brad is possibly the most entertaining of the enemies present, not to mention his boss music is fantastic.

What differentiates Comic Jumper from the rest of the Xbox Live Arcade is that it lies in no real game style or genre, the brunt of the game is a platform side-scrolling shooter, dotted with occasional melee fighting sections, QTE fragments and a good splattering of on-rail shooting for good measure. The game itself is rather challenging like an old-school platformer, and each segment rolls into the next with relative ease. Although Captain Smiley’s run is particularly slow the combat is extremely engaging, and with interactive backgrounds and foregrounds you will never lose interest in this arcade title. 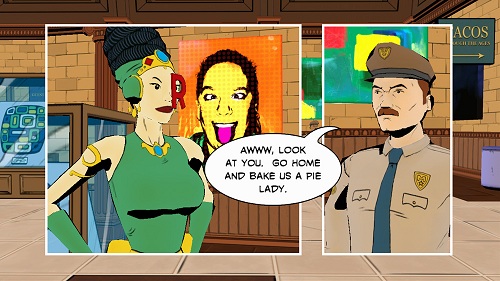 The real downfall of Comic Jumper is the writing, which is where the opinion of the game may become slightly divided; the dialogue is without a doubt over-the-top, and it breaks the fine line between a perfectly written game like Psychonauts and the almost Q-Movie styling’s of Eat Lead, you’ll either love the comic insults of Captain Smiley and Star or you’ll hate it. Comedy is the marmite of gaming and if you don’t do it well, you will lose a small section of your audience, don’t just take the game on face value, and keep playing.

There are four styles of comic that you will star in in Comic Jumper, including Modern, Fantasy, Silver Age and Manga, each style comes with its own unique style and enemies, every one completely mad-cap and off the wall. So if you’re not being attacked by golf ball wielding natives in a fantasy setting, you’re being told that you are breaking the comic authority code for the amount of violence you are causing in the Silver Age, taking the face value from the styles of comic makes for a great gaming experience, especially when you’re jumping around in the Manga panels.

Many games have gone down in history for the unique ways that they have broken the fourth wall, Psycho Mantis’ boss battle in Metal Gear Solid, or the distinct ways that Eternal Darkness could mess with your mind and two particular examples that will go down in gaming history. Comic Jumper examines the fourth wall, and then destroys it in the most violent and reckless ways possible, with countless references to Twisted Pixel themselves, in hilarious live action form as well, and this is where it begins to get a tad silly. 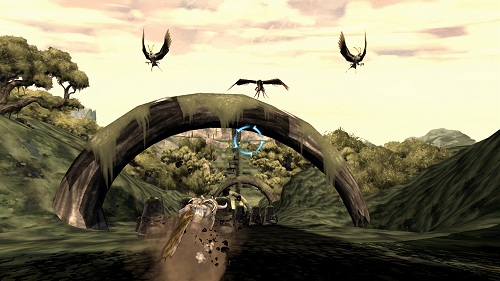 The live action sections are extremely unexpected, but exceedingly well done, from the very intro to the demise of Captain Smiley, down to the special attack that involves punches thrown by the employees at Twisted Pixel, not to mention Frank Wilson’s head butt. The decision to add live action was extremely brave, and something that’s not seen much use in games apart from Command and Conquer in years! The live action It is achieved really well, and a great step for the Xbox Live Arcade, hopefully more games will begin to embrace the ideals of the Mega CD once again!

Comic Jumper is an overly enjoyable on rails action shooting QTE experience, and is definitely worth a look if you’ve liked Twisted Pixel’s previous games, just play it with a pinch of salt, if you love the complete decimation of the fourth wall then you’ll be in your element, however you may find the self-indulgent writing a little hard to swallow at times.

Comic Jumper is available now for Xbox Live Arcade for 1200 Microsoft Points, if you’ve finished DeathSpank already it is definitely worth a look, and it will take you a while to complete all of the challenges!