One of the newest expansions for Train Simulator 2013 is the iconic Marias Pass; a high mountain pass near the Glacier National Park in north-western Montana that traverse the continental divide in the Lewis Range. The pass forms the southern limit of the Continental Rangers and as far north as McGregor Pass in the Northern Rockies, during the winter it is the only way to cross the continental divide north of Montana’s Rogers Pass. The pass allows for some serious strategic engineering, welcome to the mountains, you'll find quite a challenge here.step into the cab of, and a scenario in one of these can range from 15 minute tutorials to 110 minute trips through the North-western Mountains. 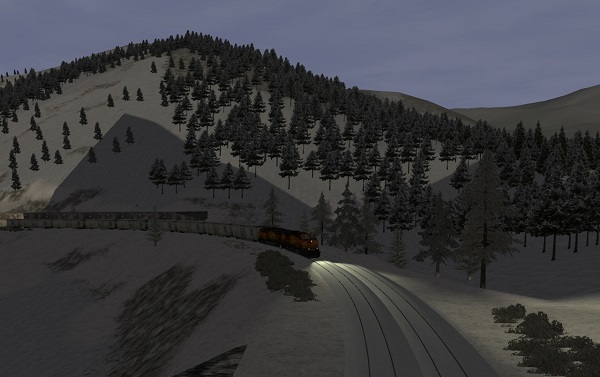 Engineers at the helm of the ES44 will have to pay more attention to speed, terrain and weather than ever before, as scenarios include a long run through the pass with extremely large loads in very unfavourable conditions, however the pack is limited to only two different scenarios in these engines —excluding the tutorial- and both of these are mostly about speed management and the finesse of getting your acceleration and

Like all Train Simulator expansions in Maria's Pass you will find yourself driving through several different scenarios covering various times of day, weather and terrain. With the pack comes the GE ES44DC in the BNSF livery and the Burlington North EMD SW1500 switchers for you to deceleration spot on.

However the mission variants are quite different; in Cold Meat you’ll find yourself deep in the mountains with long climbs and steep descents, but, time your acceleration incorrectly and you are in for a hard climb! The mountains look pleasant, although you may not see much of them as the mission is set early morning in the snow, so everything looks very similar along the route. However this does not discourage the epic scope that the mountains provide as far as the eye can see, and despite pulling your consist nearly a mile, the route layout makes even that feel small. 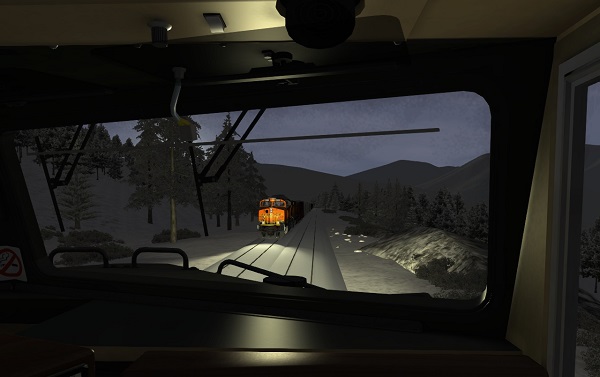 Your next option is Blackfoot or Bust, tasking you to drive from Shelby to Blackfoot, unlike Cold Meat the route is surrounded by plenty of greenery, however it is a much gentler job, while players still need to manage their time and speed the gradients aren't anywhere near as steep and getting your speed right is slightly easier making the route far more manageable and enjoyable, as with the Cold Meat mission there is other rail traffic, though due to the nature of both routes, engineers will often be riding the rails alone for most of them.

If you fancy a break from the long runs, engineers can take charge of the EMD switchers for a change of pace; the pack provides three different scenarios and a tutorial for the EMD switchers. In Shelby Grain, you will need to assemble a freight train in the yard near Shelby, in a change from the ES44 scenarios the player is given the feeling of working in a very busy yard with trains passing through intermittently. The mission is quite short, but challenging, and the key is to use the siding leads to do your shunting, this makes moving back and forth quick and smooth. 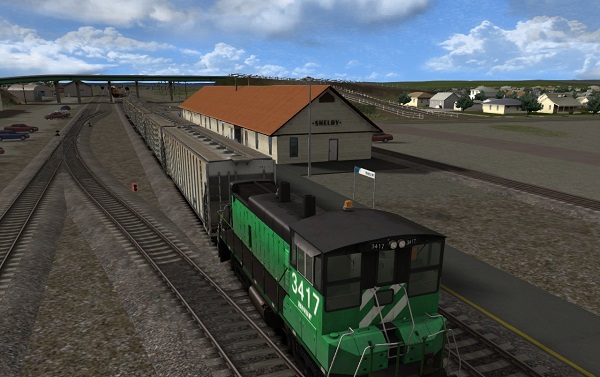 The second Switch mission Wood from Kalispell will have engineers moving wood and centre beam cars around in the Kalispell area, the scenario has the added challenge of varying the speed limit, this scenario gives the player a couple of longer running stints so speed and point management are the key to getting this right. It's also the first mission that I've found it easier to use the task log overlay for points switching. The area around Kalispell comes alive with road traffic and buildings, giving some movement to the scenario which would otherwise be missing on this single track area of the pass.

The final Switcher mission is I'm a Lumberjack... that will have engineers shunting loads in the Columbia - Whitefish area, this mission has the most amount of time allotted to it this scenario, and is by far the most challenging of the shunting scenarios. Engineers will have to manage stopping at signals, speeds, low visibility and many other factors on this route, due to the sheer amount of things you must manage, there was always something to do, making this mission far more enjoyable than the others in the pack. Plus having control over two shunters gives you a little extra power and acceleration to play with, however you will need to keep an eye on the speed limit as it can get quite low at times. 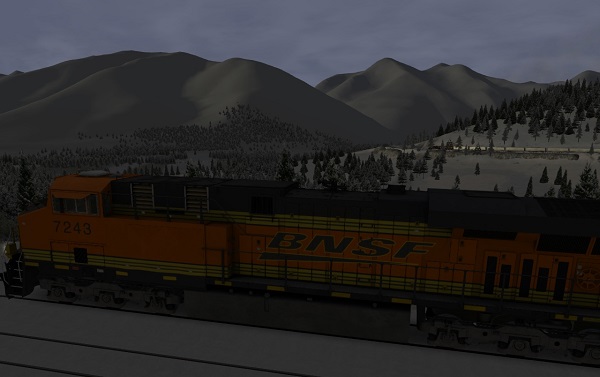 Overall I found the Marias Pass pack very enjoyable with its very different challenges and locations. Both of the Diesels are fun to drive and the routes are very scenic for those that like to make use of the screenshot function while chugging along. Marias Pass is also a great addition for those that like to make their own scenarios for Steam Workshop as there are plenty of areas to use and businesses to make deliveries to or take deliveries from!

Marias Pass is by no means new to the train simulator scene, having featured in both MSTS and Trainz, however Train Simulator 2013's version is far more varied than MSTS in that a lot of the missions take place in a snow covered environment with more freight cars, and the addition of shunting missions that makes for an enjoyable experience.

The scenarios, locations and locos are all very good but I think sometimes the emphasis on getting speed right in the ES44 scenarios can make things very frustrating, Marias Pass is a great addition to your Train Simulator collection, but may not be for all.

The Marias Pass expansion is available now for the SRP of £24.99 and requires the base Train Simulator 2013 in order to play.