Some of you may remember our coverage on the recent release of Color Cross to DsiWare by the creative developers at Little Worlds Studio, well now you can enjoy their innovative take on picross on Facebook, for free. Where it is available in English, French, German, Spanish and Italian, you can play it now here.

Encase you have never played a Picross game before, Color Cross explains the rules very easily in the space of a minute, so that casual players and puzzle fans can enjoy the addictive nature of the spectacular puzzle game, that puts a spin on the usual game play of Picross, making it a lot more fun and engaging than most versions of the game.

There are a multitude of game modes to waste hours of your time on, speaking from experience, you’ll get hooked on arcade mode, that has you playing 10 grids at a time, reaching as far as 200! Hoowever, the best feature is the Grid of the Day that features a 10x10 grid that once completed, will give you 30 Koko’s the currency of Color Cross Online. The Treasure Hunt mode asks you to discover the map squares at a time to win the ultimate treasure of thousands of Koko’s, only the luckiest of players will win however it works like a general Treasure Hunt game, and is very addictive, just don't go spending all of your Koko's on attempts to discover the treasure. 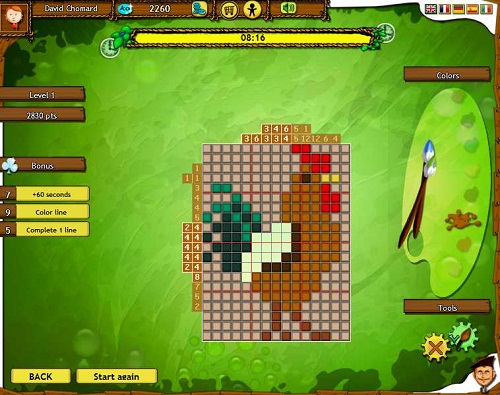 Then you have your standard game modes such as, classic mode where you can play the original game at your own pace, and with over 200 available grids you’ll have your work cut out for you. There is also an Against the clock mode, where you are pitted to solve as many grids as possible within a given time limit, this was originally what Color Cross consisted of on Facebook, before they added in all of new features present.

In order to survive, like most Facebook Games Color Cross revolves around micro-transactions with the currency of Kokos that you can buy to play as many puzzles as possible. However you will also win Kokos from solving the Grid of the Day, or Arcade mode grids, if you are lucky you will also find Kokos by playing the Treasure Hunt.
With your Kokos you can buy new packs of grids for Classic Mode, alongside other features, if you want to purchase more you can buy them through their online reload system, where 1,500 Kokos will cost you as little as â‚¬2,00.

Like most Facebook games you can post your results to your wall and invite your friends to play, as well as compare your scores through the worldwide, daily, weekly or monthly rankings.

Color Cross Online is officially one of the most addicitve games available to play on Facebook, so hopefully we'll be seeing less people posting up their needs on Farmville, and more people posting their scores on Color Cross Online! Gamercast love it, just don't play it with your speakers up high, the sound effect of colouring in squares is quite jarring!