Paradox Interactive and Paradox Development Studio has literally exploded into the limelight, thanks to the internet, and many online publications that have had the decency to invest time in the little known Crusader Kings II, tens of thousands of fans have welcomed in the grand strategy series that a few years back would have been left only for the extremely hardcore strategy fanatics. We fell in love with the game when given the chance to lose about 30 hours previewing it and could not pass up the opportunity of giving the games' latest expansion a run for its money.

The Old Gods is a plentiful expansion that sets your starting date back 200 years from 1067 to 867, introducing players to the bloodthirsty Pagans such as the Norse Vikings, this opens up a wealth of new features including rivers, looter units, concubines, events, new ways to declare war, and a different style of family, who you will find are not quite as close knit as the Christians you're used to playing with. 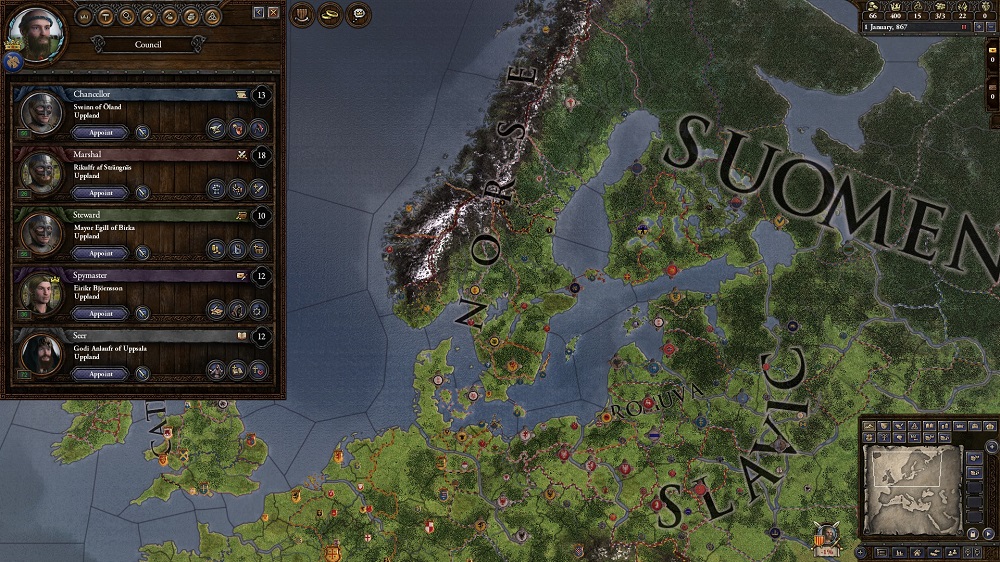 If you're new to the absolutely astounding game that is Crusader Kings II, it is important to note that unlike your standard strategy in Crusader Kings you do not play as a country, or even a county, instead you take on the role of a family with which you can do as you see fit. It's as simple as that, there is no right or wrong way to play; Paradox Development Studio's pride and joy is a sandbox strategy, and as long as you've an heir to your title then there's a story waiting to be told of your dynasty.

Crusader Kings II: The Old Gods is the expansion that fans of the game have been eagerly anticipating, because when Paradox Development Studio release an expansion, they aren't simply giving you more of the same game. Alongside the added features that we've already detailed, the most important feature to The Old Gods is its new and different way to play; the Pagans are a truly refreshing set of people to play as, simply because it is in their nature to react differently to situations, and when the time comes that you take the place of your father, your siblings, vassals and children will be far more sceptical of you as a new ruler than ever before, so you best erect a runestone to earn a little respect.

The different ways of the Pagans are extremely evident during play, and you'll often find your heirs joining independent factions, going onto greater things abroad, after all the Pagans were tribal, and most, like the Vikings weren't so big on the idea of settling down, in fact their views on the virtues of marriage and family are very similar, and each Pagan may take up to three concubines, not forgetting that their laws state that any offspring has rights to your title, meaning that its a heck of a lot more difficult to end up with no suitable heirs when your character reaches their end, well, that is, unless they're infertile. 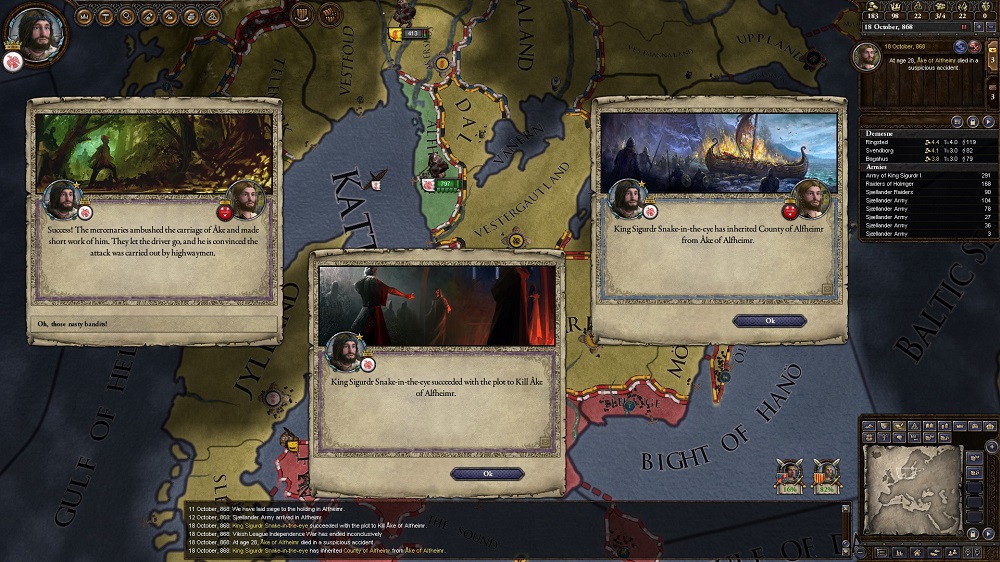 War has never been a strong focus for Crusader Kings II, after all, a small county doesn't usually have the money nor the muscle behind it to start a war, and unless you're the ruler of an entire country, wars end up costly wastes of time, that usually hurt your reputation more than help it. The Old Gods spins this tradition around on its head with the presence of the offensive and downright nasty Pagans who will actually lose prestige if they are not at war nor looting a neighbouring county. But you can't really blame them; people who celebrate with human sacrifices and a great feast are never going to decline a war because their coffers are a little low. In that respect, even if you aren't one for confrontation, The Old Gods does succeed in making war and bloodshed far more enjoyable, especially when you know you can sacrifice your prisoners in a Great Blot afterwards to celebrate.

However if you prefer to keep your troops at home defending your holdings, there's a host of defensive Pagans as well, they weren't all crazed, bloodthirsty killers. Plus if you feel more at home minding your own business watching the world go by as you mind your family even a mighty conquest needn't get in the way, as the stronger forces around you can simply subjugate your county, which whilst not necessarily a bonus, does make it very easy for you to get on with your life as those around you fight-to-the-teeth at war, however this does of course make you responsible to act at any call to arms -yes, perhaps I'm playing The Olds Gods incorrectly, but sometimes you just want your dynasty to continue without senseless violence.

Even the best of us can't always afford a war, but you won't need to lose your precious prestige point, as it is entirely possible to fulfill the role of a ferocious Norse Pagan without resorting to war; as a dastardly Viking you have the ability to turn any of your military units into a looter, as a looter that unit may appear at the shore of any other county in Europe and attack them with the vicious panache that Vikings were so famous for, and after you're done you can simply up anchor and sail off back home; no messy wars, and no consequences except for that bitter feeling in the back of the throat of your victim. Best of all is any unit can do this at will, and any spoils that you bring home will be turned into wonderful prestige points. 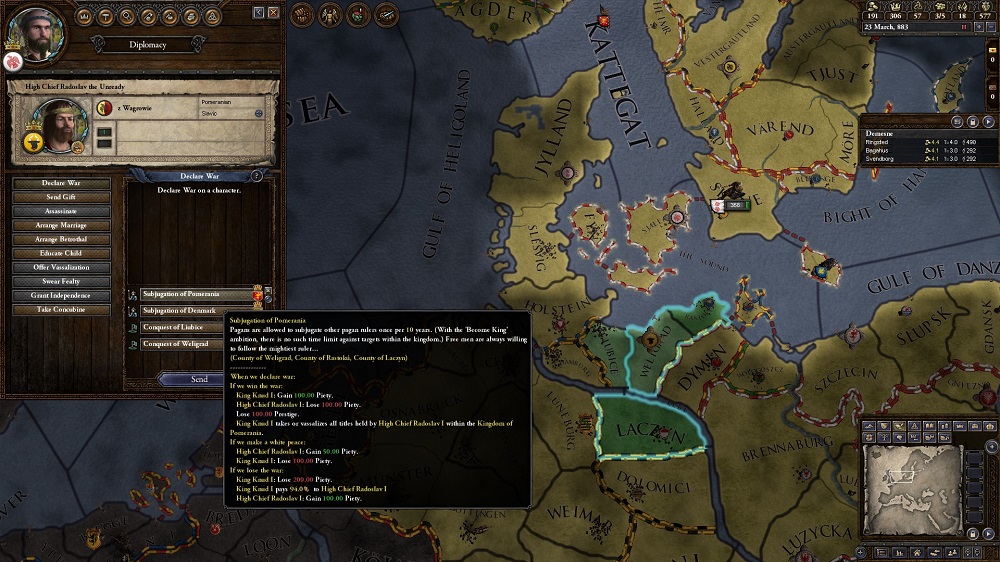 But sometimes a few meagre prestige points is not enough, and the temptation for an all-out war will beckon you towards its evil grasp, in The Old Gods expansion is almost too simple, especially because the Pagan's have got each others backs, allowing you to enact a Prepared Invasion that lets you declare war on a coastal county after verifying that you do indeed have the strength to pull them down, a bit like a plot except your reputation is on the line. But it can be even simpler than that, and if you so wish you can conquest a single bordering county with pretty much no reason. If anything the Pagans seem to revel in the spirit of a ever-growing empire, and if you've ever wished to do so in Crusader Kings II, then you're going to love being a Pagan.

So it's pretty evident that a lot of The Old Gods focuses on war, which is somewhat of a sad turn for those that prefer to see Crusader Kings II as a soap opera or Sims of the mediaeval world, however if you want to just add 200 years onto a Christian or Muslim dynasty, well, as always the choice is yours! We can only wait with bated breath to see where Paradox Development Studio take the series now, because it'll be difficult to top this outing, if you own Crusader Kings and play it religiously, then you need this expansion!

Crusader Kings II: The Old Gods is available now for the SRP of £9.99 and worth every penny, although please bear in mind that you must own a copy of the base game in order to play.

However if you've never played Crusader Kings and like the sound of what you're reading be sure to enter our competition for the chance to win a copy of Crusader Kings II and The Old Gods expansion!