Paradox interactive know a great game when they make one, and since Crusader Kings II’s release in Feb 2012, Paradox Development Studio have been creating new content for the game in a slew of expansions adding in features that the community have dreamt of, including the true Crusades Experience in Sword of Islam. However their newest expansion The Republic invites you to a whole new rule set and way of playing the game in more of a close-knit environment, it's Crusader Kings II on a much smaller scale with much more vibrant rivalry amidst your fellow neighbours.

The Republic puts you in charge of one of the five biggest merchant republics of Europe; Genoa, Venice, Pisa or Gotland, with the aim to keep your dynasty in the seat of the Serene Doge of the republic amidst bitter rivalry and embargo wars, which is easier said than done. 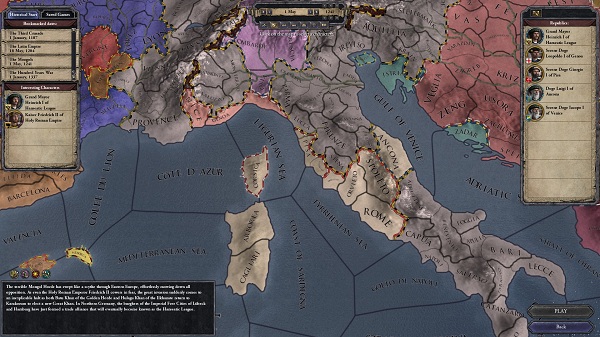 Every Patrician-to-be has a respect rating which is a combination of age, prestige and money that is given to the campaign fund, the highest respect makes them the expected successor for the republic when you are gone, and heirs in your dynasty are decided on Agnatic Seniority rules; oldest male are first in the line. What's interesting to note is that your dynasty does not end when you lose your role as Doge of the republic, but no one ever remembers second best so why should you settle with taking another patrician's orders!

As Patrician of a mercantile republic, everyone wants your spot, so between the families vying for successor of your ‘throne’ you will spark rivalries, and nasty feuds will find themselves carrying on for generations if you don’t grant your vassals certain wishes. We aren't joking, and it only takes one slip up to make one of your once loyal vassals to stop inviting you to balls, plot against you and even attempt to take your trading posts, thankfully this is Crusader Kings, so all you need do is ensure that a lot of people join you in a dastardly plot.

Issues are not only encountered inside of your own families, and the four other rival republics will often get a little overzealous at your power, or simply your existence, likewise you may feel the same, and so a feature added in The Republic is the ability to persuade an influential King to attempt to enforce an embargo on your trading posts that reside in their territory, the embargo will raze them to the ground and block you from rebuilding them for ten years, now of course you won’t simply let them achieve this which marks the start of a nasty war, unfortunately mercantile republics aren't able to handle wars, and so in this expansion mercenaries or the help of an ally become priceless. 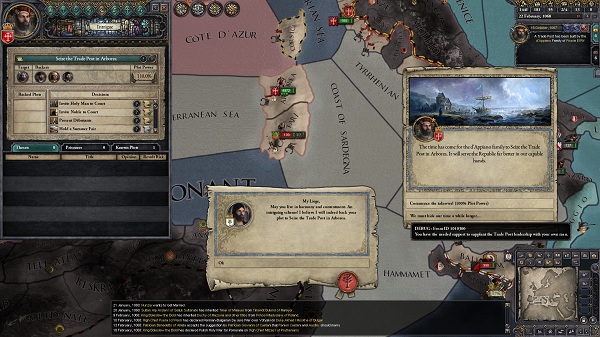 Wars aside, what makes The Republic so unique is that your holding of the Family Palace can never be conquered and overthrown, your family is constant throughout the ages and unlike a feudal lord your dynasty can continue without land to your name, which is possibly the most dissimilar factor to get your head around when playing The Republic, is that expansion in the traditional terms is not the way to be a successful Doge.

What makes being a cog in a republic different to that of a feudal lord is everything is on a much smaller scale; rather than crave land and titles, republics require trade posts that will bolster your family’s income, they do not necessarily have to be built around your domain, and can be built in foreign and domestic provinces and are vital to holding a successful trade empire.

However this does come with a drawback, if you are somewhat of an aggressive patrician and build as many trade posts as possible in your first few years as the Doge, followed by scheming plots to overtake trade posts of the incapable, or winning embargo wars you’ll find yourself with an overabundance of posts that must each be upgraded if you wish to keep them useful which in-turn creates a multitude of micromanagement, something that Crusader Kings II lacked which caused many to flock to it. 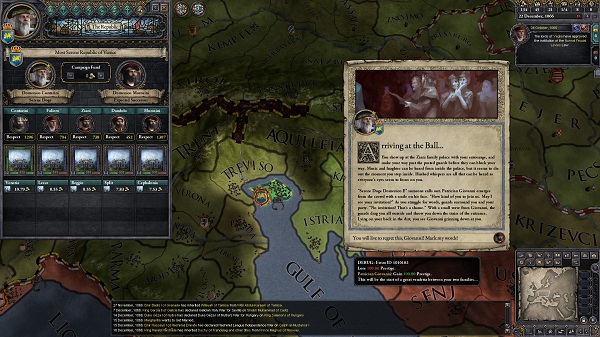 For those that love the family dramas and stories that are made from a game of Crusader Kings II, there are an assortment of new events for those at the helm of a mercantile empire, as a Doge you have a lot less control over who your kinsmen marry, they may disappear as such and inform you that they are marrying a peasant or perhaps the countess of a province, similarly from time to time you will be given trade post-centric events that may end in a bit of extra money in your pocket, or misfortune, however the most interesting of all are when your lesser vassals request the trade posts of another family, which can either lead to one liking you a bit more than another, or the start of a very nasty quarrel that will span generations.

Crusader Kings II: The Republic brings a distinctly different play style to one of the most engrossing and unique grand strategy’s out there, whilst its arduous micromanagement may ward some off, the lifted pressure of expansion in the traditional sense is a welcome change. If you don’t mind the odd feud between families and are prepared to fill the campaign fund with your hard-earned money to ensure your dynasty’s success, then The Republic is definitely an expansion to the wonderful world of Crusader Kings II that is worth checking out.

Crusader Kings II: The Republic is available now for £7.99 from all good digital distribution sites.

Crusader Kings II is a strategy game that swiftly reached cult status for its unique take on the grand strategy, mixing the drama of a soap opera with expansion and war it is often cited as the best strategy game of all time and with good reason! As it does not lie in the traditional real time and turn based strategies it does have a steep learning curve to it, but will undoubtedly be the best game you have played in decades. In order to play Crusader Kings II: The Republic you must have a copy of the core game.