If there's one subgenre that will live forever it's the transport simulation, whilst some may mock it, the likes of Traffic Giant, Railroad Tycoon and the classic A-Train series live on unforgotten in the memory of their fans, one contender that came along in the last few years was Cities in Motion, it brought the sim back to the limelight, and managed to top a lot of the great favourites of the nineties. So when Cities in Motion 2 was announced, it was a real risk as to whether the developers at Colossal Order could possibly make a better game to label the transport strategy simulator genre. They've taken the series in a whole new direction that's for sure, but is it for the better?

We're going to say this now to stop any misunderstandings, of course very recently the latest Sim City title has been released, granted it has been to some negativity, however a Sim City title is a Sim City title, and it is important to grasp that Cities in Motion 2 is not simply a new city building game, what it asks you to do is build a fully networked transportation system around an already bustling city, make the inhabitants of the city happy and pull a profit in at the end of the day. 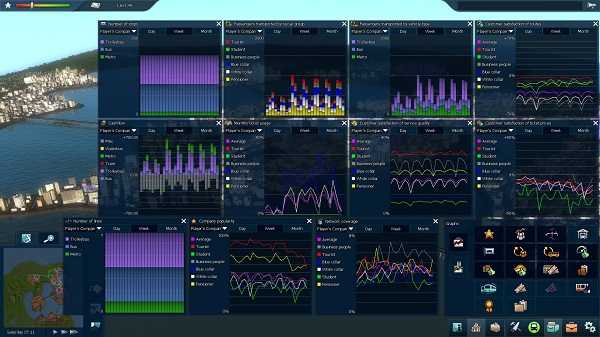 In order to do this you have five different modes of transportation to work with; buses, trolleys, trams, water buses and metro trains, now of course each option comes with its own strengths and weaknesses which you must weigh up before you decide how to run your cities transportation, this may sound simple but it is by no means an easy decision, of course buses are cheap, easy to maintain and their track is already laid on networks of road, but they're slow and only certain types of people will feel comfortable using them when compared to a metro train; fast, flashy and not slowed by traffic, but you'll spend an arm and a leg laying the track alone, and you'll shortly find money is very difficult to raise in Cities in Motion 2 unless you're a bit of a seasoned veteran.

Some unfamiliar with the transportation simulation may feel a little lost when first coming face-to-face with Cities in Motion 2, the tutorial will not really teach the uninformed on exactly where to start in the game, well except for standard bus lines, it is never explained entirely on the ethos behind laying lines, and roads or indeed how to change the elevation of tracks for trains, or the very reason that the waypoint system exists. Much like the great Train Giant (A-Train 9), or in fact the brilliant Crusader Kings II the only real way to truly learn Cities in Motion 2 is with experimentation, specifically inside of Sandbox mode.

But even veterans may feel a little bewildered, it would be fair to say that Cities in Motion 2 is a far cry from the inherently structured nature of its predecessor, gone is the proposal of evolving transportation through the ages in well known European cities, instead the campaign lands you with nonspecific cities and loose missions such as supplying a city with transportation, that and with only a handful of missions it would appear that the pull of Cities in Motion 2 has been changed significantly. 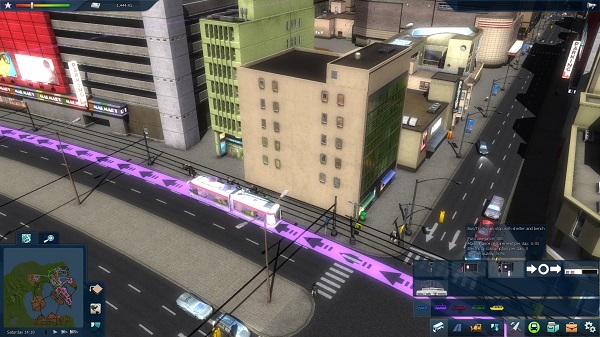 This dramatic tilt does not really come as much of a surprise however, after all this is a game that has literally been shaped and developed from the community's wishlist, so the campaign has stepped down for the almighty Sandbox mode, what's so good about a sandbox mode apart from total freedom? Unlimited Money! A big issue that has always existed in transport simulators is a users vision is always a lot larger than their wallet, and mistakes made can never undo the damage to your spending, and so thankfully, Cities in Motion 2 now caters for the real trial and error and testing required to get a player up to speed with the best strategies that each mode of transportation can garner; by doing whatever they want, only one problem with this; it's a glorious life sucker!

Fans of the original will be glad to know that the fantastic map editor is back, complete with new buildings and such, once more you are given the power to create and build your own cities, hometowns and ideal play areas for your next project. However with the new inclusion of dynamic cities you needn't even use the editor to its full extent if you're too busy, if you just place the groundwork such as roads, train tracks and tram and trolley lines, and take your map of transport networks into the sandbox then you can simply watch your city grow from the ground up, it won't be as perfect as you placing each and every building, but the simulation aspect is pretty impressive granted you aren't zoning areas to be industrial, commercial and residential!

This isn't the only way that dynamic cities function in Cities in Motion 2, and in a standard game if they are enabled you may notice that as you increase public transportation, and get your city on the move, your populace will build larger and more extravagant buildings based on the influx that public transportation brings to your city, it's perhaps not very noticeable in a built up town, but it's fantastic to see your once small beginning flourishes thanks to your well thought-out and cleverly networked system. 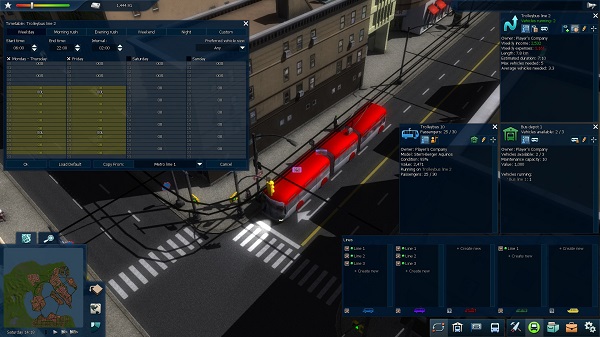 To give you a little more control in reaping the benefits of that shiny new tram system that the tourists are using to get to the focus of your cities from hotels, Colossal Order have also snuck in a fabulous new zoning ability, allowing you to literally price up your blue collar workers and your tourists so that using transport in a general area will stick to a specified price point, which is o e heck of a lot more useful than trying to satisfy all of your customers with one ticket price for each mode of transport.

The biggest feature and perhaps a main focus of Cities in Motion 2 is the illustrious timetabling, the regularity of each line of each mode of transportation can now be modified by the player, these tie in with the inclusion of day and night cycles, and rush hours allowing you to cater your timetables for when your Cims go to work, and putting on a revised service when they should all be tucked up in bed. The timetables are a brilliant addition, and one that is always welcomed with open arms in the transportation subgenre, however for some it might not be in-depth enough.

Granted the game has an exceptional learning curve, once you get to grips with the way it truly functions, you can feel somewhat stifled by the lack of stats surrounding some of the new features, particularly the timetables. Of course you will always know when the general populace feels that there is a service missing at a certain time of the day by small unhappy faces; however what the game fails to inform users is exactly how much usage your current timetable is getting, and short of watching each scheduled bus/train/tram and trolley to accurately track how many passengers are using the service, there isn't enough information to tell you which stops to cut, or which scheduled departures are unnecessary due to low passenger usage. 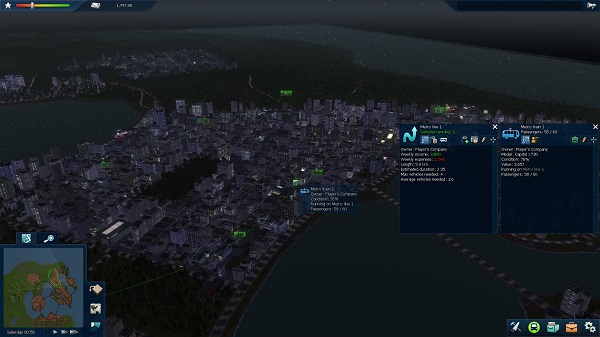 As if all of that wasn't enough, Colossal Order went that bit further and opened up the world of multiplayer to Cities in Motion 2, allowing users to create transportation networks co-operatively that much like Farming Simulator is a lot more effective than you'd think. This is not forgetting the strange addition of competitive multiplayer, which just as you might suspect does not work particularly well in such a game, and it pretty much goes two ways; either the two of you are too polite to trample on each other's handiwork, or the complete opposite and you'll find online players going out of their way to ensure that your company will not strive, I think I'm a little too polite sometimes. The multiplayer modes are a much requested feature of most games but are not necessary to enjoy the full extent of the game, however those that feel their strategies are lacking without a chum around will be ecstatic to find that the co-operative mode actually works pretty well.

There's little to fault in Cities in Motion 2, sure now with the timetabling you get the feeling that Cims shouldn't get complacent that they have been waiting for a metro to come by, yet the next scheduled train is not for another hour, however in hindsight your routes would seem absolutely perfect if this weren't the case, similarly you will also encounter the occasional hiccup either with the AI vehicles, or even when you've set up your line but aren't informed why it's not running. However one integral feature missing from the game that you would expect of any expansive and sandbox-scale title of recent is an autosave, meaning that any issue, and more likely, any mistake made in the game cannot be rectified with a load of the last save point, because undoubtedly it was you, five hours ago, regrettably PC gaming of the last ten-or-so years has created a generation of lazy savers, and I'm one of them, sorry Colossal Order.

It is a little sad that Cities in Motion 2 has lost the concentration that the former title excelled in, the focus of this transport simulation has took quite a turn, but not necessarily for the worse, ultimately the sandbox is still the place to be if you wish to experiment with limitless cash, however the transformation to full-on transportation management complete with timetabling still doesn't feel comprehensive enough to make it the perfect transportation game.

Cities in Motion 2 is out now on Windows PC and Mac, and can be purchased from most digital distribution sites for the SRP of £14.99 if timetabling buses gets you exciting, what on earth are you waiting for?