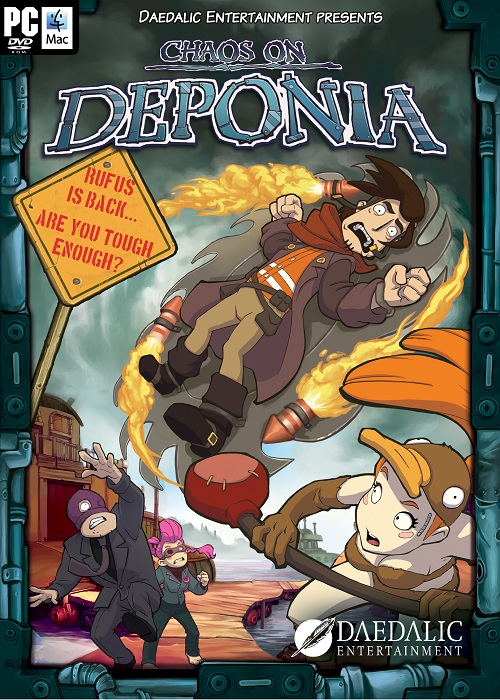 Our hero of sorts Rufus returns in Chaos on Deponia, the second of a proposed trilogy of adventure games from the experts at Daedalic Entertainment that chronicles the attempts of a clumsy oaf to better himself by reaching the fabled halls of the floating planet of Elysium, or so we thought, but things begin to get a bit more serious in Chaos on Deponia, well, with the story, not with Rufus unfortunately, the guy is still a complete moron.

Chaos on Deponia pretty much takes up from where we left off in the previous game, and the Organon; your average storm troopers complete with metallic beards, are still planning to blow up the junk planet of Deponia, for very conflicting reasons that we will discover as our story unfolds. Goal and Cletus are still making their way to Elysium, but now they are going to convince the Council of Eldars that Deponia should not be destroyed. 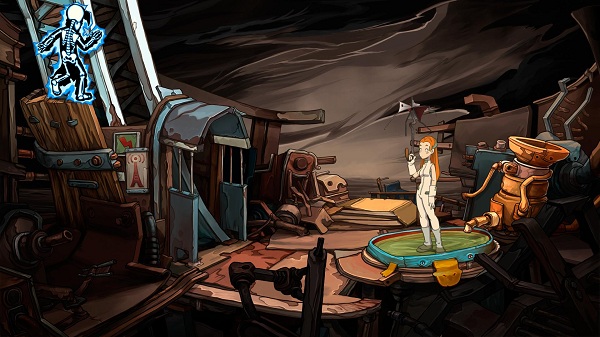 Five minutes into the game, those unfamiliar with Deponia are treated to a brilliant summation of our title character Rufus as he amusingly manages to set a house on fire, kill a bird and generally wreak havoc on an old lady's house as he performs the simple task of taking a hammer from a toolbox, unfortunately whilst Rufus has definitely grown as a person, he’s still as ham-fisted as they come, you just have to remember, he means well.

With Goal and Cletus out of his life, Rufus has returned to his old tricks, and is still trying to get to Elysium, the fabled floating planet, and he begins so with a device that Rube Goldberg himself would be proud of, but with a science based on hearsay and inner conviction, as usual his chance of success does not seem very high. As fate would have it, his doomed attempt intervenes with Goal and Cletus' plans spiraling them all back to square one yet again.

We do mean square one! Whilst you won’t be wandering Kuvaq to help revive Goal, Rufus has managed yet again to break the poor woman, splintering her conscious into three very distinctive parts; Lady Goal, Spunky Goal and Baby Goal, forming a unique mechanic that requires you to speak to certain Goal identities to solve puzzles, when it comes to puzzles in Chaos on Deponia you've got a delightful selection of bizarre brainteasers to solve. 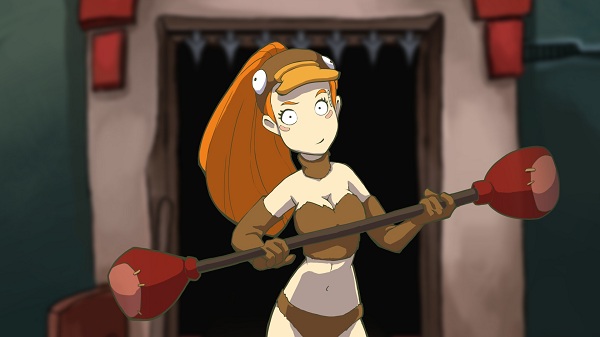 If you aren't coaxing a minimalist poet to hand over his essential possessions, you're collecting and hatching Platypus eggs around the Floating Black Market. It's pretty safe to say that nothing you carry out in this game would make sense in the real world and so you'll have to envelope yourself into the mind of Rufus to take on the combination puzzles and dialogue trees that still make up a good portion of game. However when you combine these with some of the absolutely ridiculous one-screen puzzles like the very heated Rock-Paper-Scissors battle using approved non-loaded tournament hands, or resolving a squabble with the ancient right of Platypus Bataka you begin to get sucked into the crazy world of Deponia, and suddenly strange convoluted resolutions make total sense that would be impossible to piece together in any other adventure game!

With such an outrageous protagonist, you can expect the game to be appropriately wild, and the environments and surroundings on the various floating platforms are bright, colourful and full of life, each object is beautifully hand-drawn whether interactive or not, and the characters animate with all the vibrancy you would expect. There really aren't many games out there that can match the unique identity of Deponia's soft steam-punk aesthetic with such a bright colour palette.

Chaos on Deponia is not just a pretty face however, and the voice work in the game is pulled off brilliantly for the massive cast of characters, but the real star of the show is the jingle-jangle music that holds together the game's locations and characters, and truly bringing the game to life, is the strange interlude songs between each chapter; strangely catchy, yet nonsensical. Sound is not simply limited to music, dialogue and sound effects in Chaos on Deponia however, and hidden in the game is a very ingenious puzzle not seen in an adventure game for a long time, which requires you to lower the music volume in order to resolve an issue! 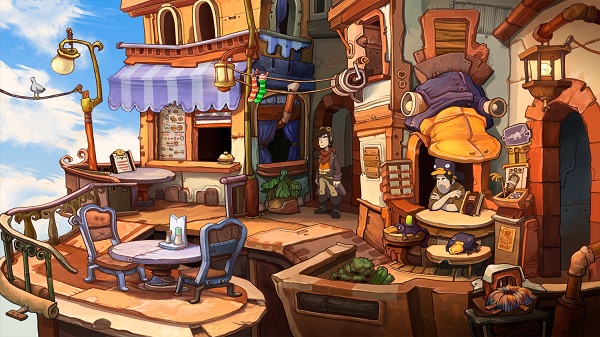 Fans of the original game will be pleased to see the mention and return of certain characters, however the Floating Black Market and Porto Fisco also play host to a selection of very interesting new eccentrics such as Rufus’ estranged father, the delightfully Scandinavian leader of the revolution Janosch, or the attendant at Chez Schlumpi; a servant to McThulu the Lord of Darkness Chef. It goes without saying that there's not a boring character out there in the world of Deponia, and so far the series contains one of the largest odd-ball casts of all adventure game history, this may be down to the fact that they know never to overstep their bounds, you'll never catch yourself rolling your eyes in this game!

If you played Deponia then you are going to fall in love all over again with the game's sequel, if you haven't played Deponia, what are you waiting for? With no other adventure game like it on the market, prepare to become embroiled in the most odd-ball of romance stories with our utterly hopeless Deponian Rufus. We can only hope to see the resolution to the trilogy soon!

Chaos on Deponia is available now in from most digital distribution sites for the SRP of £17.99, unfortunately there's yet to be a retail release in the UK, we can hold out hope though!