Gamers are lying when they tell you they do not have a competitive nature, there isn’t a sane player alive that does not receive the thrill of beating their previous highscore or timelimit. Well never before has there been a game that you won’t let beat you as Bust-n-Rush from Techtonic Games!

The game concept is simple; Bust-n-Rush is a three lane running game. Similar to a schmup you will need to pay full attention to your surroundings and your character as you switch from lane to lane, dodging obstacles, traps and busting objects to increase your score. The game is split up into two halves; challenges and endless mode, the challenges will put your skills up to the test and give specific goals, whereas endless allows you to freely roam the environments to gain the highest score possible. 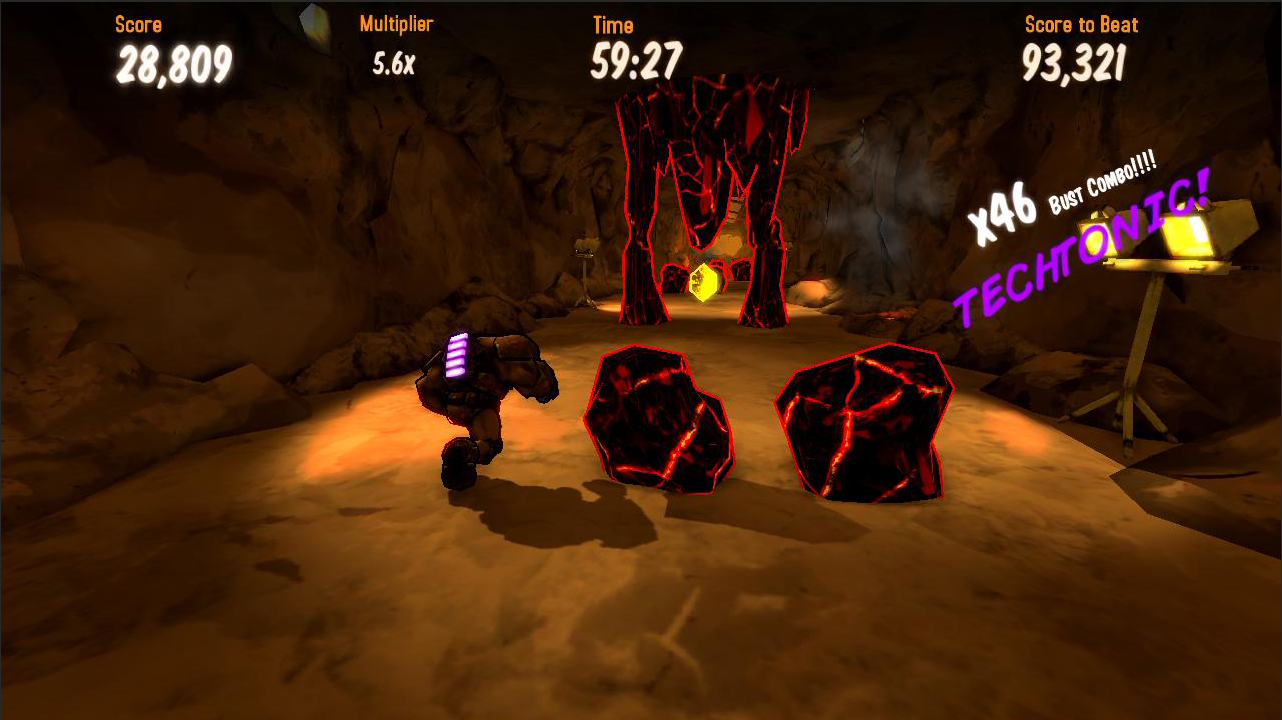 So nothing sounds remarkable about the game? What makes Bust-n-Rush a new game that you must own is the fresh experience gained from the procedural level generation, this and the overall concept of the game go together like eggs and ham! What this means is that every time you play the game, you will have a new and different level layout, so you have a new challenge on every play, ending the monotony of learning layouts to achieve the best score. After playing for a few attempts it makes you wonder why addictive ‘running’ games like Tomena Sanner or BIT.TRIP Runner have not utilised procedural generation for endless levels and increased replay value.

If you thought Super Meat Boy was difficult, perhaps you need to try finishing the 30 challenges divided amongst the three stages; whilst the first few serve as an introduction to the concept and mechanics of the game, all challenges past a certain point will ask you to fulfil daunting tasks such as to stay running for a certain amount of time, or using gravity shifts in an endless void of death, after around the tenth attempt at a challenge you will begin to question your own sanity.

Bust-n-Rush is addictive, endless, and has a fantastic rock backdrop suiting the variety of the three environments that Kovo will need to bust through; until you get your footing, you’ll be traversing the cavernous Depths of Thurl, busting through rocks, stalactites and leaping across bottomless pits to the rhythmic industrial rock beat that truly brings together Bust-n-Rush. However you may be pleasantly surprised to know that unlike some scoreboard-driven games, Bust-n-Rush is not just rinse and repeat; the three locations flow into each other beautifully, and each give their own unique addition to your rushing endeavour. 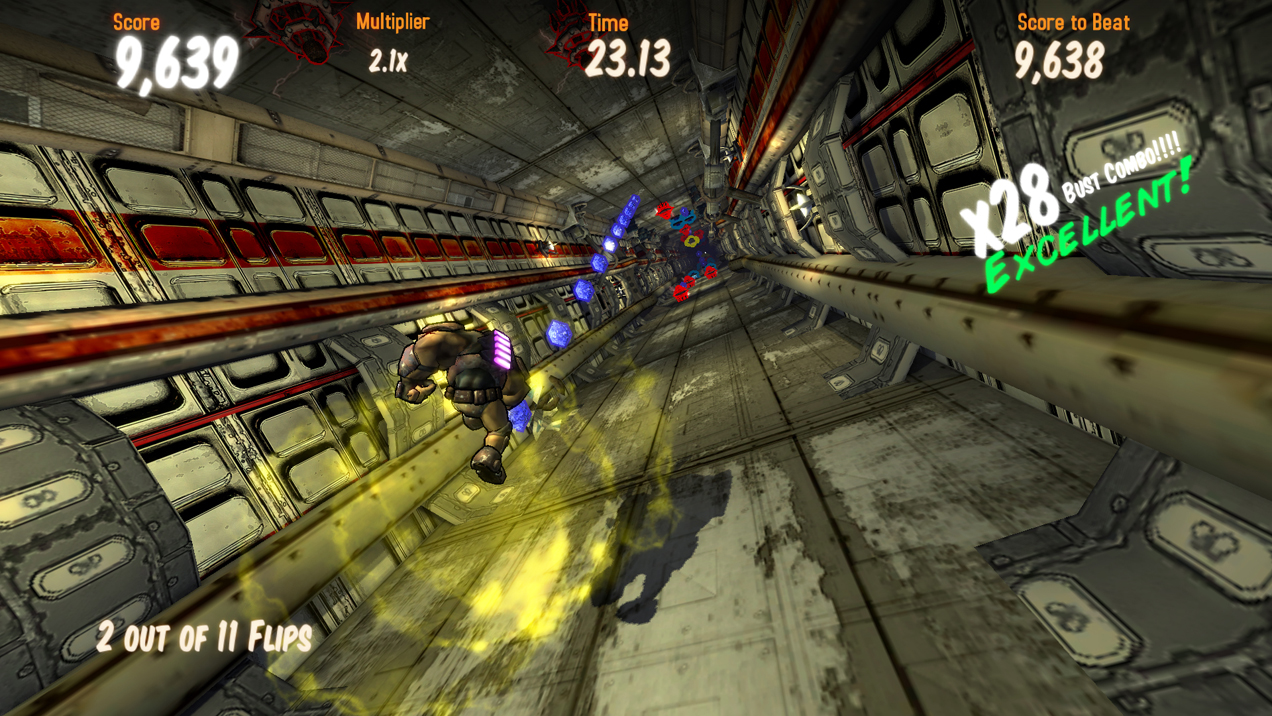 As if it couldn’t get any better Techtonic have included a number of cheevos in the game, that are actually called cheevos! As achievements go they are fairly basic and are awarded on how many of certain items you smash; reaching Kovo’s terminal velocity and even when you reach the length of a marathon, they are a nice addition to a game that you will otherwise play to death anyway, and with the achievements secret you are never sure what you should be striving for anyway.

Best of all with Bust-n-Rush is that the graphics are simple, yet stylised; the subtle cell shaded models work very well in the environments created, and the colour system that highlights pickups, obstacles and special objects with a corresponding colour turns the game into a manic guitar hero-style run for your life as your fingers hover over the arrow keys ready to sway from lane to lane as you slowly pick up speed.

Although the game is practically built around endless running, you'll only have access to one of them until you complete the challenges, now I’m not ashamed to say that some of the challenges do seem impossible to finish, which is unfortunate because you won't be seeing endless modes for Gearmageddon or The Last Bound any time soon, unless you give the game all of your determination and patience. 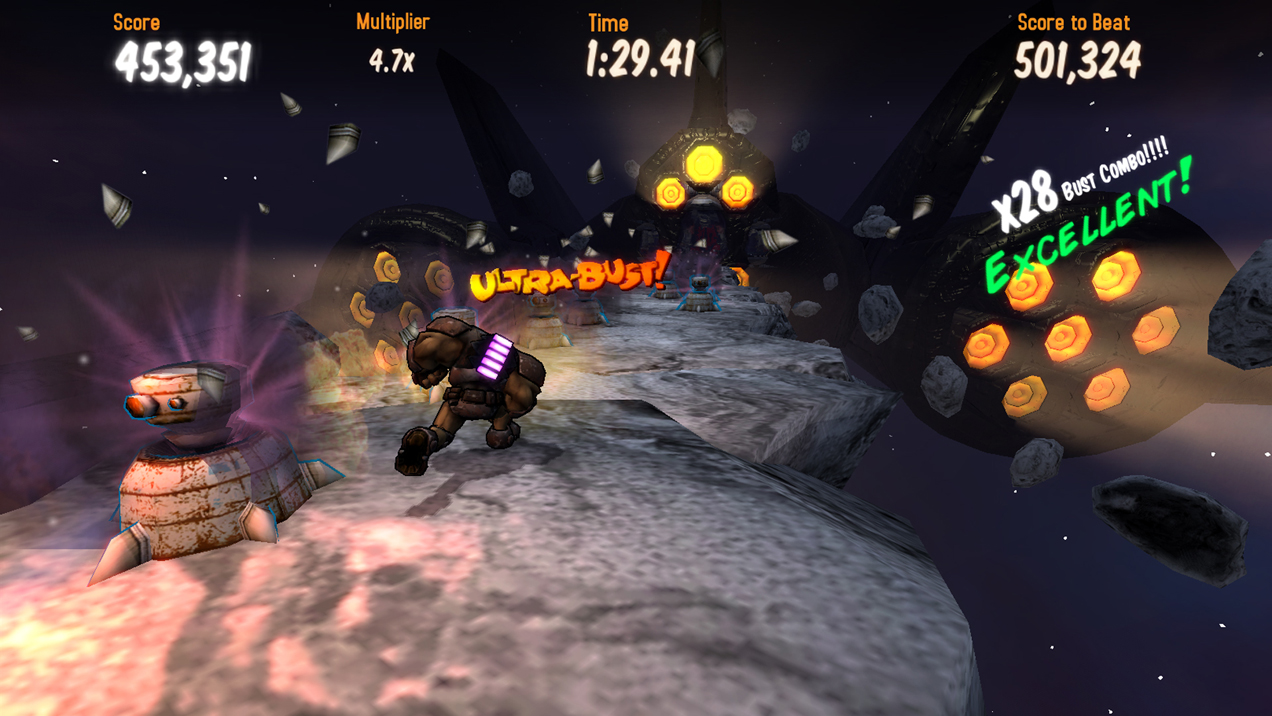 Unfortunately the procedural level generation is not perfect, and on occasion you will given seemingly impossible obstacles enmass at one point where all you can do is fail, it is a shame that you will most often come across these at inopportune moments, thankfully these seem to be few and far between, and to be fair there is very little to knock in this simple but effective game.

Bust-n-Rush is a fantastically addictive game, if you are into high score challenges, this is undoubtedly one to add to the collection, and is definitely not for the feint of heart, this game will crush you, and is not afraid if you get angry at it.

Bust-n-Rush is available now from Gamersgate for £5.99 or £7.48 bundled with the fantastic soundtrack, if your latest game has gotten old, you definitely will not put down Bust-n-Rush any time soon!