Bust-n-Rush is a new game from independent company Techtonic Games, with a true indie mentality; their first game is pure simplicity, and whilst it’s ruthless gameplay may turn some away, this is one game that surely separates the men from the boys!

Bust-n-Rush is an action packed, fast paced running game with procedurally generated levels that enforce a fresh gaming experience on every play, and is presented in three dimensions for increased visibility, not to mention a little added difficulty. You control Kovo; practically a living steamroller, as him you’ll need to bust through stone and metal whilst rushing through levels at supersonic speeds, all the while dodging spikes, lava, meteors and plenty other obstacles, as well as using special objects to flip gravity or thrust yourself through the air. It may sound complicated, but this is the most straightforward game you'll find that isn't on an iPhone.

If there’s one thing that Techtonic games have gotten spot on it’s the music that accompanies your fast paced rushing, with the industrial Fluke-like composition of Depths of Thurl to the haunting chilled out ballads of The Last Bound the music is a perfect assist to getting you into the zone as you jump, duck, dodge and weave around hazards. 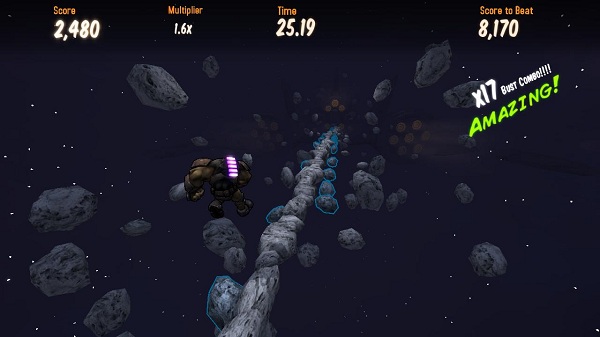 Before you unlock Endless mode there are a number of Challenges that provide an introduction to the goals of the game, as well as a starting point for the learning curve that only the patient will adapt to, getting to grips with the game will take a while, but even after 5 hours of playing, you’ll still want to go back for more.

You would think that with only three separate environments to bust-n-rush around you’d quickly run out of things to do, however thanks to the procedurally generated landscapes each environment is given almost an endless quality when the levels are added to at random from a select group of set pieces combined with layouts of assets, and although sometimes you will receive a layout that requires the upmost precision, others will come close to perfection, and you will feel the rhythmic pulse of the level as you continue rushing towards your endless goal.

Bust-n-Rush is a game not for the faint of heart, it will either make a man out of you, or crush you like a grape; it’s literally make or break in this game, and if you’ve an addictive nature, do not be surprised when 5 minutes turns into 5 hours! 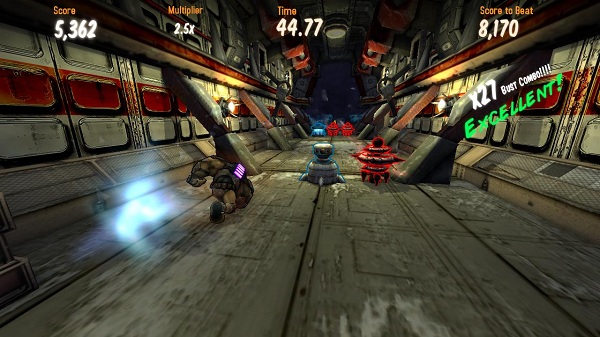 The three different environments add a substantial variety to the game, with the standard environmental hazards of The Depths of Thurl, the propulsive explosives of Gearmageddon or the gravity switching barrels of The Last Bound. Each environment seems to flow into the next; bringing gameplay from one world to the other, and the procedurally generated level pieces works brilliantly well to provide you with a fresh and unique experience every time that you play, even in the challenges!

What is so brilliant about Bust-n-Rush is that the game is simple in so many different ways, the art is minimally cel-shaped, and positive and negative objects are coloured for ease, a brilliant aid when Kovo reaches an almost terminal velocity and movement is a mere twitch. The gameplay is simplicity at its best; run, jump, swerve and smash, rinse and repeat, an age old formula and when executed so well a brilliant game is the result.

Bust-n-Rush looks like it is going to be an extremely addictive and competitive score game, and I could see it sitting very happily in my steam list alongside Super Meat Boy and The Ball. Whilst Bust-n-Rush does not have a confirmed release date, Techtonic Games aim to get it out before the end of the year. They’ve already got a fairly solid game on their hands, and we wish them the best at Gamercast.