Back on the 17th of December 2009 episode 1 of the Blue Toad Murder files was released, now a few months down the line the final 6th episode has been released, concluding the despicable story of murder in the quintessentially quaint English country village of Little Riddle. Developed by Relentless Software and available only on the Playstation 3 via the PSN. You can pick up the episodes individually for £4.79 each, or you can go the cheaper route and buy them in packs of three for £9.99 each. However in order to play all episodes you must have episode 1, so we don't recommend buying random episodes, and what reason do you have for not wanting a complete story?

One thing that I did enjoy about the Blue Toad episodes is that they are represented as a full game, when you buy the episodes the game simply gives you one game where you can then access all the episodes that you have purchased, keeping your PS3 tidy, and making it far harder to missplace certain episodes.

For those that haven't played the game, you (and up to three other players if you wish) take control of four different, and strange characters; Lambert Vandenbosch, Majorie Maple, Hannah Dakota and Richard Dickens, who make up the infamous Blue Toad Agency; a group of detectives that just happen to be taking some time off after solving a huge case, when to their misfortune a murder occurs in the quiet village of Little Riddle. With your inquisitive mind you must solve puzzles, while keeping a close eye on each villager that you meet; in Little Riddle everyone is a suspect, and they all seem to have something to hide. 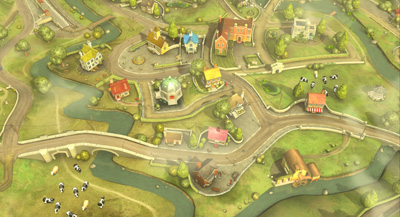 When controlling your Blue Toad agent particularly with multiple players you don't actually need to have two controllers, and all four characters can be controlled via the one controller, making the game a very cheap and enjoyable multiplayer title if you only have one controller. You just pass the controller around like you would with Wii Sports. The only issue I have found however is if you do use multiple controllers anyone can take control. I had this problem when it came round to guessing who a killer was in an episode and Charlotte almost put in my guess. This was quite frustrating, and could be in a competitive house. So I do recommend playing with just one controller to avoid any confusion whilst playing.

If there's one thing to really enjoy about the game, other than it's extremely humorous dialogue, it is the host of characters, who each have their own unique personality; you won't find any two villagers that feel the same, just what you'd expect in a small British village! Of course with a lot of murders going on you do lose characters as you progress through the game, but new ones are constantly added, which keeps it feeling fresh, as they aren't just duplicates of other characters. Except for Mrs Bothersome of course, who is Mrs Gossip's sister, although she looks more of a twin sister. At Gamercast we don't mind that there are two similar Mrs Gossip's though, as she is one of our favourite characters, with her pointless chatter, coupled with the best puzzles: Mrs Gossip’s puzzles will usually require you to choose the correct object she is describing, however you'll get idle chatter in amongst while she's talking, making it fun to play and listen to.

Speaking of puzzles, there are a huge variety in the game, however, some will test your brain more than others, as there are some very hard mathematical questions amongst the extremely easy ones, when I say easy, its things like knowing your 3 times table as well as the difference between odd and even numbers. One thing we all agree on however is that with each new episode the puzzles became harder, and we found ourselves getting more bronze medals than gold. Of course this is by no means bad, it gives the series a steady difficulty curve to challenge the player.

In each episode there are twelve puzzles, that are mixed amongst going to locations and listening to the villagers talk, close attention must be paid when your detective is conversing with the villager, as you never know when you might need to know something that was said, or something that may have been in the background. As there are three recaps per episode, which ask you a variety of questions from what you have just witnessed, to the colour of the train you rode in on, even the name of the police inspector. 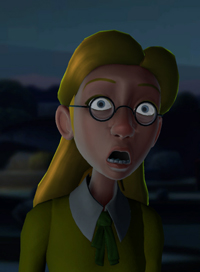 A big selling point of the game in my perspective is the superb audio, which was all spoken by just one man, a Mr Tom Dussek who voices everyone from the short sighted postman to the narrator. If you listen carefully you can notice his voice through-out, but he manages to add a variety of character, and he did a bloody good job too. The audio of the game is complimented by the visuals, that are virtually flawless, all the colours sit comfortably within the environment and characters, and aspects rarely seem out of place.

Something memorable from the first time you finish a puzzle is the narrator will tell you how you've done, hopefully nobody has been offended by him, but you are either told you did a good job, by calling you a snob in a variety of ways, or how you're crap. I found it highly enjoyable listening to his criticisms.

My only other real nit-pick I had with the game, other than the controller issues we had, is I would have liked the option to play through all of the episodes that you have purchased, it breaks the flow of the game, requiring you to leave the episode, back to the menu then going into the next episode and starting it up. Although I do understand that as episodic games they come in parts, just it would have be nice to have an option to do it all in one big go.

I highly recommend the series, but I would have loved them to be longer, just because I wanted to be able to investigate Little Riddle further. It's good for anyone who likes cute stereotypical British humour, or someone that wants a good multiplayer family game which isn't a quiz title, that at the same time challenges your mind. I only hope Relentless continues on with this new IP, as I would definitely enjoy investigating in this little village some more.