Everyone knows that the bloody Crusades were all about wiping vampires from the face of the earth... wait this sounds a lot like a film I've seen, surprisingly enough it's actually part of the setting of a new hack'n'slash action RPG Blood Knights, the a group of vampire hunters are at the end of their tether as they make one last attempt to protect the fabled Blood Seal that has prevented demons from setting foot on Earth. When the guardian of the seal is killed, the humans have only one trick left; to bind their best vampire hunter with a vampire so that he gains the strength necessarily to fend off hoards of the nasty beings and regain the seal.

The only problem is Jeremy; renowned vampire hunter and Alysa the vampiress he is bonded with cannot stand one-another, so their quest to protect the blood seal from the vampires does not start out well, so it's even worse when Jeremy, the once noble vampire hunter is turned into a vampire himself, which means no more eating after midnight, no more touching water.. oh wait, well the water factor is true, but he’ll also have a hard time going into towns uninvited, more importantly though, it opens up a new element of health regeneration if you can squeeze some blood sucking in during a battle. 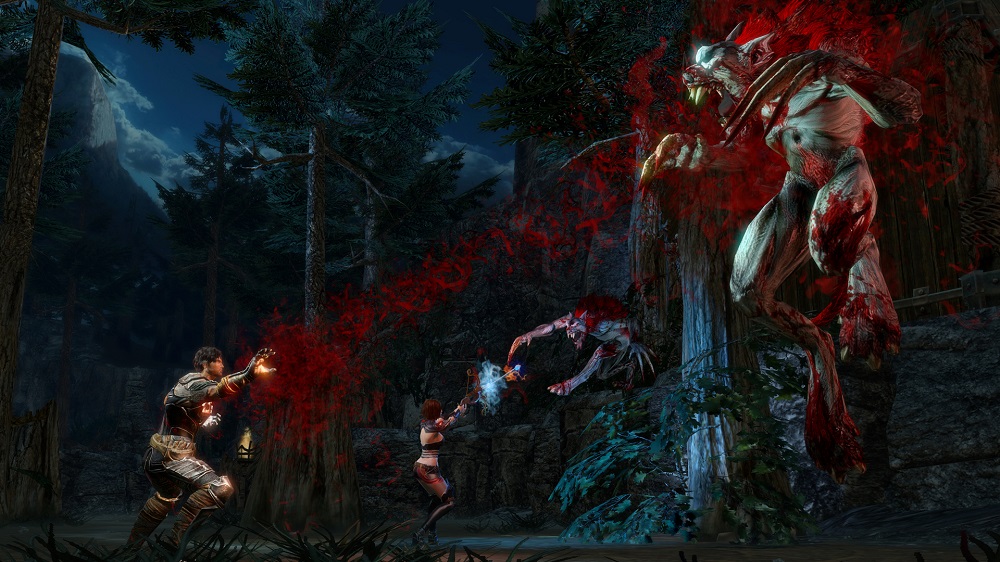 Now you might be thinking, oh, another companion game, well that's where you'd be wrong, because you'll only be controlling one of the two characters in Blood Knights and each are so very different that you cannot simply get away with just using one of them, well you can if you want, but it'd be a bit boring, you see because Jeremy and Alysa are very different, they need each other, Alysa is a dab-hand with her crossbow, and combined with a pack of grenades she's an unstoppable sniper, but she's got no close range attacks leaving her incredibly vulnerable in battle, on the other hand Jeremy's close combat attacks will knock many an enemy off their feet begging for mercy, but there's little he can do when peppered at by the odd projectile thrower. Of course with limitations comes an interesting tactical aspect, but it only really works if you play the game a certain way.

You see, Blood Knights caters for both the single and co-operative crowd, however both modes are not devoid of the odd issue, strangest of all is if you opt to play Blood Knight single player you won't see yourself followed by an AI companion, instead if you wish to use the powers of both Jeremy and Alysa you need to swap your characters around which makes it extremely difficult to use the two together tactically, and you lose out on the complementing factors of each character, it makes you wonder why the single player option even exists, thankfully things get a lot better when you've a friend to join in.

Co-op fans, one important factor of Blood Knights is the game supports local co-op only, whilst I personally prefer the more traditional co-op method, a few may see the limitation as somewhat archaic. When compared to the single player experience, cooperative play is bliss. Utilising drop in/drop out play each character can complement the other, aside from the obvious short and long range differences, Alysa can push objects, enemies and Jeremy; which is handy when you consider she can only attack at long range, on the other hand Jeremy can pull objects, enemies and Alysa towards him to pull in any aggro she might have gained in pissing all the enemies off, and then of course with two characters on the field you can always revive each other for the cost of a little blood, which gets extremely frustrating ins ingle player. 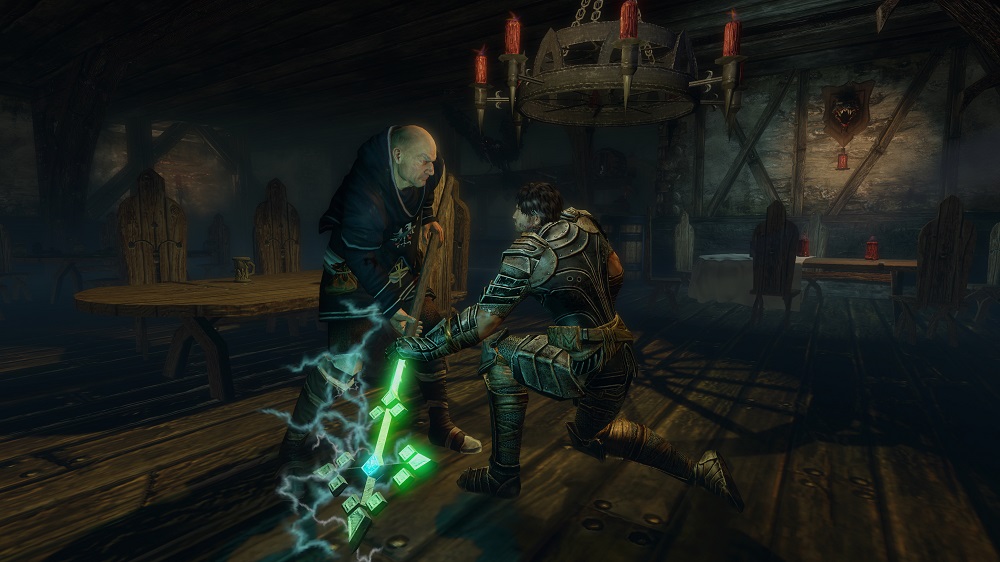 As well as a bit of a hack’n’slash Blood Knights also holds many RPG elements close to its heart, both of your characters have an inventory system that will gradually fill with new and interesting armour, though generally it's simply the case of upgrading your armour when a new piece is collected; Blood Knights seems to want to save you the standard hassle of an RPG, so not only is loot at a very minimal level, but the items that each character can use will go straight to that character no matter who picked them up, if only every multi-character based RPG acted the same!

Loot aside, the game also features a fairly small skill system hidden away, it's not very user friendly as skill systems go, however the abilities on offer are extremely advantageous, each increase in level you'll gain points to spend on skills, and with every five hidden blood coins you collect you'll be able to boost a base stat of your character, there's no real room for improvement with the skill system though as you there aren't many new moves to unlock, everything is pretty much based on the moves you already have, which isn't all bad, especially when you consider how overpowered a certain Vampiress can get after a few upgrades on her crossbow.

One of the possible downfalls of the game is its reliance on platforming, which is not necessarily a bad thing in an action RPG, but when the cameras are as static as those used in Blood Knights it is not difficult to get frustrating fast, whilst it doesn’t pose as much of an issue in two-player local co-op as players can levitate each other to each platform, you will still often find it so difficult to judge where you’re jumping that you begin to dread the sight of a potential platforming sections.

On the subject of cameras, unfortunately another system that just hinders the player is exactly that, when in a local co-op game the area given to you is limited to Jeremy, and often you'll find yourself wanting to walk back to an area but are blocked in doing so until both of your characters attempt to reactive the camera in that zone, it gets pretty frustrating with cameras locking all around the place. On the contrary the cameras in battle appear to be the opposite and still become frustrating; you'll often find they attempt track each of you, often knocking one of you out of view making for some extremely frustrating arguments between players, there is definitely room for improvement in regards to them, the only real solution is to ensure that both players move as one! 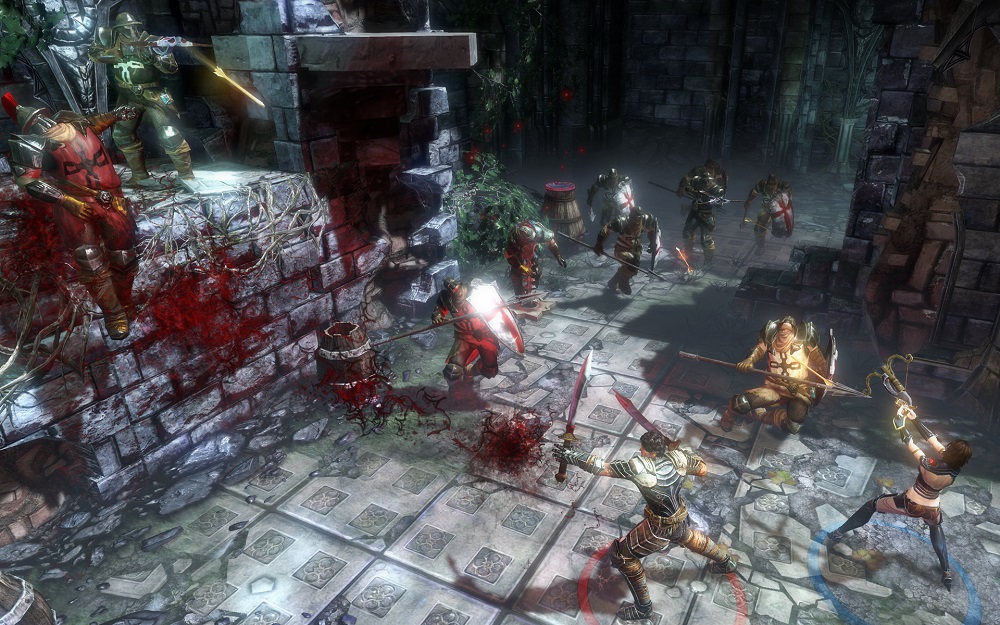 One of the most endearing factors of Blood Knights is its pretty bad, now we don’t mean to say that it’s a terrible game, it’s sort of like a bad film that you watch for entertainment value, like a good old B or Z-Movie which pretty much comes down to the plot, dialogue and just characters in general. It’s rare when a game manages to fulfil the state of a B-movie without trying to overdo it. Of course, it’s not everyone’s cup of tea, but as a local co-op game, you can’t help but have a good laugh at the odd line here and there, and potentially the insane ramblings about bloodsuckers whilst infused in combat!

Blood Knights is not without its flaws, but what you do get for your money is a very accessible drop-in/drop-out local co-op hack’n’slash that may finish a little too soon for your liking, but provides a short-but-sweet experience. If you choose not to take the game too seriously you will have a riot of a time!

Blood Knights is available now on the Xbox Live Arcade, PlayStation Network and Windows PC for the SRP of £11.99.