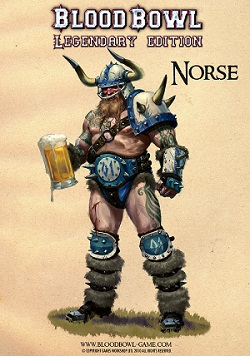 A second new team will be coming to the old world sport of Blood Bowl. From the cold Northlands come the Norsemen, with a lineup of more traditional types of players for example throwers, blitzers and runners instead of the more bespoke player types that races such as Orcs use.

The Norse are famed for their strength and have a natural berserk playing style that allows them to take on the bigger players of other teams. The Norsemen are backed up with the help of from the Yhetees which are more than capable of dealing with any of the other big plays teams might employ.

The Norse will also come with a new stadium; an outdoor pitch complete with a covering of snow, which joins the line-up of stadiums from the previous games.

Other races that have been confirmed, but have not had details about them announced are: Undead, Amazon and Ogres, hopefully in the run up to the release of the game we will hear a lot more announcements. Blood Bowl: Legendary Edition is planned for release on Windows PC Q4 2010