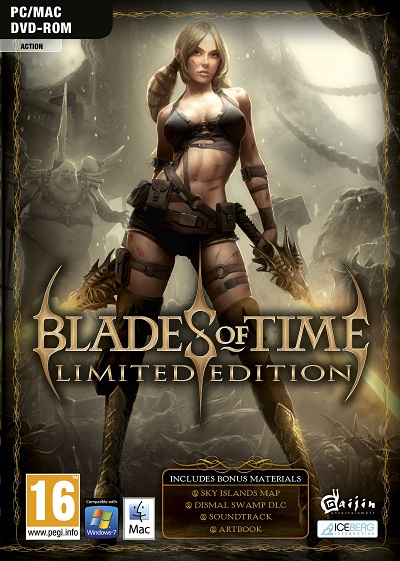 Blades of Time is the sequel to the 2009 multiplatform hack-n-slash X-Blades that whilst not truly exceptional, provided an enjoyable game if you like looking at scantily clad women. Thankfully three years later developer Gaijin have changed treasure hunter Ayumi's attire for the better and added in some cool features to sit in nice and snugly between the fast paced Devil May Cry style hack-n-slashing.

Our heroine Ayumi returns in search of the great treasure of the fabled world of Dragonland, a far-off land that many treasure hunters dream of visiting, and one only accessible via a magical sphere at the Treasure Hunters Guild that conveniently breaks shortly after your touchdown on the mysterious land.

Like all good treasure hunters and boy scouts, Ayumi would be clueless in the strange land if she did not have her handy compass complete with two pointers; one that points to the main objective, the true treasure of Dragonland, and the other... well she doesn't know where that points really. Thankfully, we do, and it points to the not-so-important-but-really-useful treasure chests dotted all around the island that aren't necessary to complete the game, but unlock a wide variety of different equip-able items to wear, shoot and dismember the ugly creatures that seem somewhat drawn to your presence. 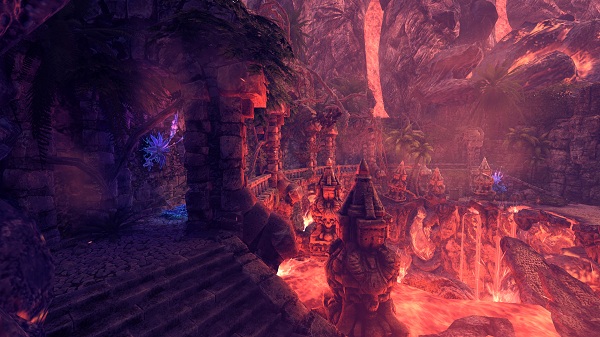 Ayumi's main weapon is her twin blades that are a source of extremely fluid and particular gorgeous combat, her grand flourishes are reminiscent of Kratos and her additional gunplay thanks to a selection of ridiculously massive rifles add an oddly precise third person aiming system into the game. Both elements are somewhat repetitive and shallow, but it is not the swordplay and shooting sections that questions the very way that you fight in games, oh no, this is reserved for Ayumi's recently obtained ability.

Game changing mechanics aside there are numerous new abilities that can be sought for Ayumi, these are your standard genre affair, whilst there are no new combos to unlock, there are a variety of spells and special skills to aid her in the fight against chaos. New skills and abilities are obtained from the souls of your enemies that can be deposited at Altars dotted around the island, however because there is never really a point where you will find enemies that you aren't required to kill, and there are no arbitrary numbers to be found, you're pretty much able to unlock whatever you want from the altars that you find, allowing you to pick and choose abilities fuelled with fire, ice or increased damage on headshots, a viscous quick attack and even infusing your weapons with the elements.

All of the abilities and skills that you unlock are fuelled by Ayumi's rage; smash in enough heads and your bar will increase, attack even more and you'll gain enough juice to unleash an ability with certain powerful attacks requiring more than one bar, this stops the player from spamming enemies with their magnificent fire balls and the like ensuring that the player is always thinking about what they are doing, and not just hack, hack, hack. 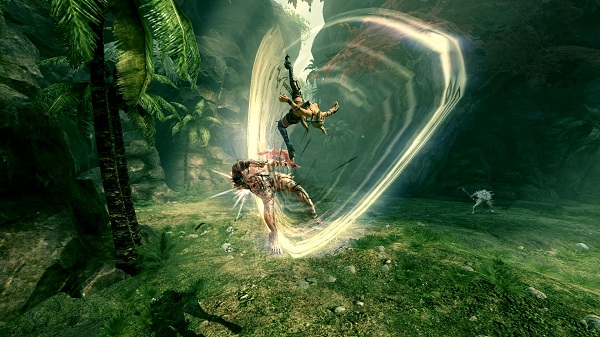 Abilities aside, Blades of Time looks like a bog standard game, so why buy it over God of War 17 and Devil May Cry: X Code Veronica? Because Ayumi, much like a special prince we all know and love has a certain affiliation with time. Ayumi cannot simply rewind time however, she can control it for solving puzzles and most importantly battle, think of it like Clank's Temporal Recording ability in Ratchet and Clank: A Crack in Time. Time Rewind allows Ayumi to rewind time whilst keeping a record of all her previous actions and replaying them in a dummy copy of herself that can fight, shoot and do absolutely anything that she can, all you need to do is record her doing it.

To make matters even more confusing you are not just limited to two Ayumi's, and time permitting you can create as many copies of the young treasure hunter as you like and this isn't just a gimmick that you'll use two or three times in the game. From the second you learn about Time Rewind you will be required to use it in practically every battle you fight, least you wish to face a particularly fast and gruesome death.

One of the best examples is from early on in the game at the third boss character that you will encounter, with a large regenerative tank on his back you'll have trouble taking him down a peg, and with his quick reflexes he won't let his back turn on you, in order to distract him you'll need to hack and slash your best at his front, rewind time a suitable length and then whilst your copy futilely attacks him you can come in at the rear; taking his tanks down and shortly after showing him whose boss.

Now Blades of Time may look like a standard hack-n-slash but thanks to Time Rewind which really must be embraced, you'll soon find that this is not just a walkover, it's a pretty tough game and without going out of your way to hunt down every piece of treasure you'll still find the game's length at around 8-10 hours, this of course depends on how quickly you adopt Time Rewind into your fights! 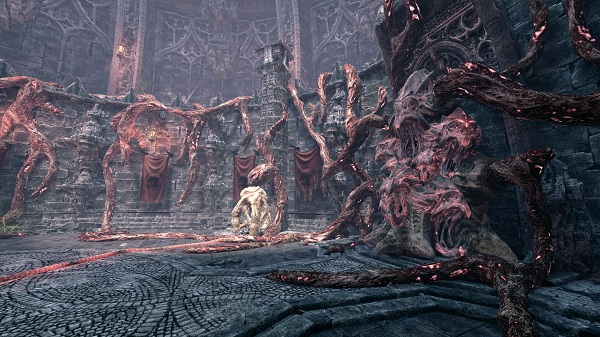 Since Devil May Cry any game that including hacking or slashing must including large boss characters larger than your protagonist, whilst it's not difficult to be larger than the petite Ayumi, there are many a monstrous creatures for you to hack, slash and obliterate from the face of Dragonland including possibly the most deadly and annoying creature known to man; the Chaos Slashers. These guys are to Blades of Time what Nemesis is to Resident Evil 3, once one of these blighters get a hold of you you're doomed, they cannot be killed, they cannot be stopped, and when you set your eyes on one, all you will want to do is hide into a corner and hope it doesn't see you, because the only tactic to escape from these abominations is to distract them with time rewind whilst you sneak past hopefully unseen.

Thankfully the Slashers are the only real difficult enemies in the game, and all others generally need a good old hack or a few sneaky time rewind tactics, after all zombies, spiders and the various beasts from the depths of an ungodly world have never stopped you in a game before.

We live in a true celebrity culture, in videogames, characters are no longer voiced by the developers, or that guy across the road, but fully fledged actors or well known personalities, so whereas the camp stylings of Resident Evil were alright in the nineties, now they are the stuff of legends, it would be an understatement to say that our treasure hunter Ayumi likes to talk a bit, in fact the poor lass has a terrible case of verbal diarrhoea, and she'll pretty much say anything that comes to mind, and let me tell you, her mind travels at 1 billion miles a minute! Whilst you may tell yourself that it won't matter, 4 hours in, her quintessentially British accent will begin to grate. 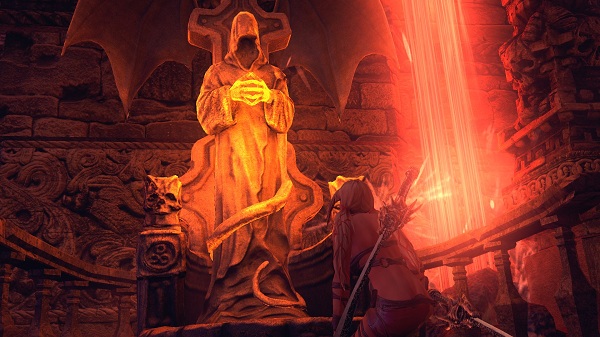 On top of the main story is Outbreak Mode that can be played in singleplayer, or online for a far more intense battle, and the best way to explain the additional mode would be Dynasty Warriors: Blades of Time, where you must capture points from the enemy whilst fending off the chaos hoards, understandably you do not have the option to use Time Rewind in Outbreak, generally the mode is fairly entertaining in multiplayer but fairly average in singleplayer.

Packaged with the PC version is the Dismal Swamp DLC, this acts as an expansion to the story where Blades of Times finishes off and follows Michelle and Zero at the end of the fight against the Vicar of Chaos. Whilst Michelle does not have the ability to time rewind like Ayumi, the short lived DLC will keep you entertained for around an hour, and whether it is a bad or good point, Dismal Swamp feels a lot like an old school 3rd person shooter, a bit like Jet Force Gemini, but with less blood and guts. Fighting alongside the Skyguards and against the hordes of chaos including artillery snails is pretty entertaining, and a must play.

Despite any past discrepancies with Gaijin's previous game X-Blades, Blades of Time is a fully comprehensive and engaging hack-n-slash, its extraordinary Time Rewind mechanic makes combat a true fight for survival and tasks the very way that you approach battle. It's just a damn shame that Ayumi is possibly one of the most annoying characters to grace the gaming world since Navi.

Blades of Time is available now for PC from the Iceberg Interactive Store, Xbox 360 and Playstation 3, although with all the extra content of the PC version, we think we know which platform you should pick because the Dismal Swamp is not all you get for your loyalty to the platform, and the limited edition of Blades of Time comes with a whole host of content including an exclusive map for Outbreak mode, the art book, original soundtrack and some very nifty wallpapers.