Following on from DICE's Battlefield: Bad Company, Battlefield: Bad Company 2 follows the four man squad of misfits from the B Company as they strive to find a device capable of generating an EMP strong enough to cripple the USA in one blast. Looking solely at the singleplayer campaign, it follows a fictional war between the Russians and the US, the missions are quite linear, and as usual cover is your main friend, I found that if I was constantly getting killed there was probably a way through some buildings that could get you behind, below or close enough to take out whatever is killing you (usually gun emplacements).

I found that on normal difficulty the game was a bit tricky, however I blame this on my “guns blazing” style of playing, whereas I found it much easier when using a combination of the sniper rifle and the machine gun. Through the game there are 30 weapons to find and pick up some of which are useful others aren’t, most things can be solved using the sniper rifle, rocket launcher or the assault rifle. You also get to drive a host of vehicles, one of which was a tank. I was however disappointed with the time you spend using the vehicle as it felt like it lasted only about 5-10 minutes, a little longer would have been far more enjoyable, as everyone likes to drive a tank now and again. 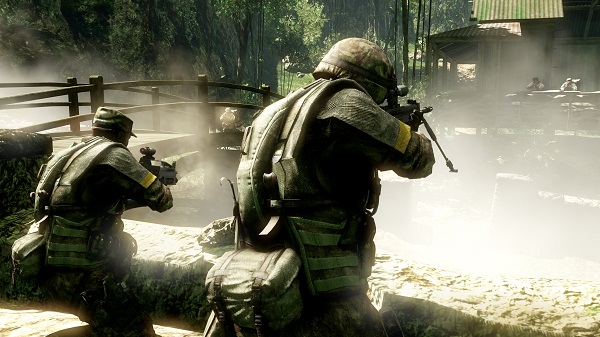 A nice addition was in the Snowblind level where you could freeze to death while moving around in the level so you had to go between buildings or blow up explosive barrels to keep warm, I found that blowing doors off with rockets saved valuable time when try to get into buildings. There is a long list of things to like in the game, a wide range of weapons means there is something to suit pretty much everyone, the areas are nicely set out with plenty of cover and it is a good challenge. It's not just the case of rushing through the game, some of the missions would take a few attempts to complete them, getting stuck on certain missions, as in attempting my goals, one hit would put kill me, another mission I did five times before blind luck stepped in and I got past the bit I was stuck on.

The destruction model that the game has is probably one of the best elements of the game, in Battlefield: Bad Company 2, nothing is safe; is there a house in your way? Blow it up, some enemies are using trees for cover? Knock 'em down. Almost everything in the world is destructible which was a very enjoyable part of the game.

The story itself is nothing oscar worthy but I expected that when I started the game, although it was enough to keep me playing, I don't feel like I am anticipating the next game, the characters are likable enough, I didn't really care about them but I wouldn’t say I hated them.

To be honest Battlefield: Bad Company 2 is a pretty solid FPS but it’s not too different from all the other shooters out there, it kept me playing for the few hours that the story lasted without feeling I had wasted my time like I have done with other games in the past.

Without playing the multiplayer, and only the singleplayer campaign, it was a good game and enjoyable in a few sections, but not enthralling enough for another playthrough.