Baron Wittard is a brilliant throwback to days and games gone by, and revisits the panoramic nodular style of movement with a solitary exploration based story as found in games like Myst, Riven and Schizm: Mysterious Journey. These aren’t your average adventure game, whilst there is some spoken dialogue present, most of the solutions to puzzles will be found on your own accord, and most importantly in your own time. Solitary exploration titles are extremely non-linear, and they encourage the player to explore their surroundings and make their own assumptions. Rather than place a large emphasis on narrative, they focus almost wholly on environments and atmospheres. 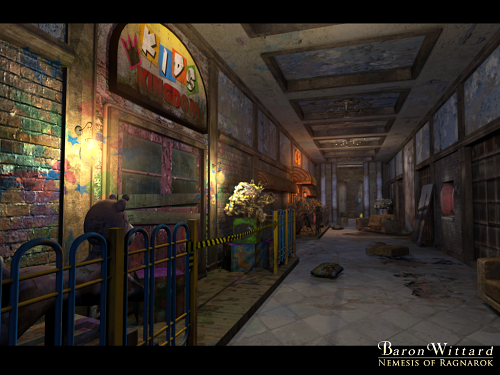 Like a lot of first person adventure games, Baron Wittard is all about building the atmosphere, as you walk through the ghostly hallways, long-abandoned with distant memories of humanity, across stained floor titles, and dirtied doors you can't help but feel uncomfortable in the hauntingly beautiful locations.

However much Baron Wittard feels like a horror game, at its heart it is fantasy, and its roots are firmly placed within Norse Mythology, so much so that throughout the game you will encounter the malevolent Fenrir who will stop at nothing to become corporeal and bring forth Ragnarok. The mysteriously missing Baron knows of his plans and thanks to an amulet it falls upon you to stop Fenrir and close the portal between the two worlds.

It’s the usual struggle between doing something right, and being a right bastard, one of the choices you get every second of your life, and Baron Wittard: Nemesis of Ragnarok is not shy to give you that same choice. Don't worry if you choose to allow Ragnarok to come to fruition you will be safe at your PC, and you needn’t fear the battle of the gods in your living room. 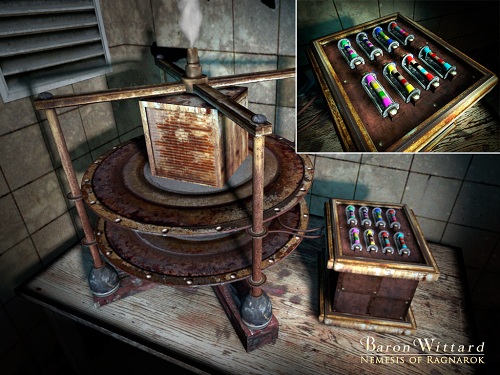 In Baron Wittard you will come across a lot of puzzles that you have seen before; sliding blocks, lights out, the good old tower of Hanoi, there's even a bit of Simon Says, no matter how clever you are, when you play Baron Wittard if you do not have a pen and paper and a keen eye you are set to fail, there will be at least one puzzle that is going to catch you out big time! You just have to try and resist seeking out a walkthrough; you’ll feel far better for it in the long run.

Baron Wittard rewards you for just how much attention you pay to your surroundings; after all you are an investigative reporter, and what reporter walks around the scene of their investigation with their eyes closed? If you see anything strange you know that you are going to want to write it down, lest you miss a vital piece of information to a puzzle, in Baron Wittard you practically are an investigative reporter. Just don’t tell the HMRC or they may want to tax you double.

Get ready to explore Utopia; the ultimate depiction of urban decay, venture into the maze of sewers beneath the complex so that you can be drawn into something much more sinister and otherworldly than you would have ever imagined when you gingerly surveyed the courtyard of the derelict site that was once the magnificent city of wonders. 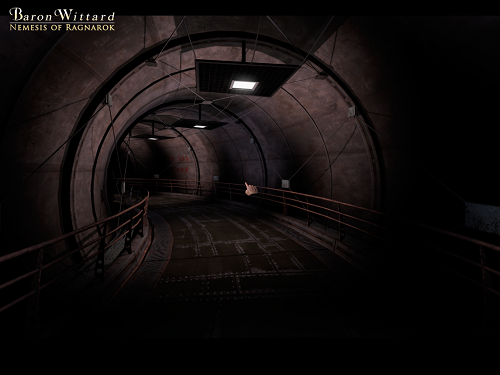 The intricately pre-rendered locations are a beautiful fit with the gameplay, and you've room upon room of the Utopia to explore, each ‘screen’ is lovingly modelled to the most intricate detail imaginable, something that few games out of the panoramic nodular genre can achieve. Wax Lyrical have actually managed to create a ‘living’ location full of history and distant memories, and as you walk through the abandoned hallways you can all but wonder at what the Utopia had wished to achieve.

However, Baron Wittard is not just a pretty face, and there is a lot of substance to accompany the stylish ‘screens’; you have the multi-layered atmosphere which is built together through the sound design, subtly haunting music and visual effects. Most effective of Baron Wittard’s atmosphere is the sound design which takes pointers from nightmarish games such as Silent Hill and Dead Space and packs the game full of distant air conditioning units, awkward silences, and unassumingly surprising crickets.

If you do not enjoy being told what to do in games and wish you had all of the time in the world to explore, investigate and ponder, then Baron Wittard is right up your alley. Full of head scratching puzzles, intriguing notes and beautifully urban locations you'll not be finishing it in a hurry unless you train your keen eye to be extra vigilant.

Baron Wittard: Nemesis of Ragnarok is available now for an SRP of £19.99 and you can buy it from the Iceberg shop now, if you feel like revisiting the days when puzzles were hard, what are you waiting for?