Relax, we've got everything under control; it's that time of the month again and Marty is taking a trip back in time, however this isn't the Hill Valley of the future, in fact it's the Hill Valley of the present. But boy does it look futuristic, and we all know that futuristic spaces are governed strictly, they are always masquerading dystopia’s as utopia’s, and enhance, enhance, zoom is even possible on your standard VCR, you guessed it, Citizen Brown ticks all of these boxes. 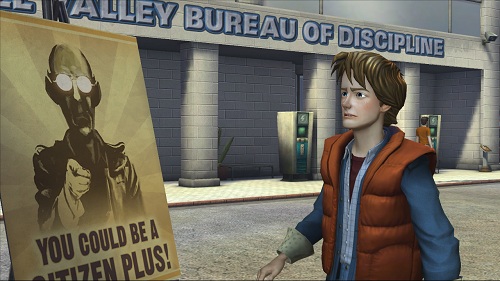 You wouldn't guess you were in naÃ¯ve 1986 as you walk through Hill Valley under the control of Citizen Brown, the spit-polished buildings and conformity of the citizens spark a definite feel of a bizarro world. It's polo shirt Thursday and everyone has a fake smile on their face as they drive around in their electronic golf cars, if you stick around for Friday, it's Hawaiian shirt day, however with the amount of rules you'll be breaking, don't expect to hang around for very long.

I'm probably not the only one to rejoice in the materialisation of a futuristic alternate universe, and in fact it is something I have personally been waiting for since the announcement of the series, unsurprisingly Telltale sure do deliver, and it's fantastic to see all of the different characters shining through in their alternate selves.

The Hill Valley of Citizen Brown is most definitely a dystopia, and is ruled by the rules, your friendly-neighborhood Doc Brown seems to have gone a bit crazy with power, and in Hill Valley almost everything is forbidden, however all is not quite as it seems in this nightmarish utopia, and you are not the only person to notice, and you feel a sinister undertone working its way through the city as you unveil exactly what is going on. If lacking anything, Citizen Brown did not concede to the utter darkness that it could have fell to, something that Telltale games have always lacked somewhat, so it will be brilliant to see what dark corners they explore in the more adult series' lined up for the coming future.

Possibly the highlight of the episode is without a doubt the two references to films that were snuck in there, most obvious was the brilliant zoom, zoom, enhance meme from Blade Runner that most will undoubtedly recognise from CSI, as well as a little allusion to Shaun of the Dead, I'll see if you get that one.

Citizen Brown gives an extra 2-3 hours gameplay on top of the 6-8 already provided, having just passed the half way mark there's still another good 4 hours left in the series that will give the seasoned adventure gamer a total of around 10-15 hours, something that not many £40 games can attest to these days, let alone £15! 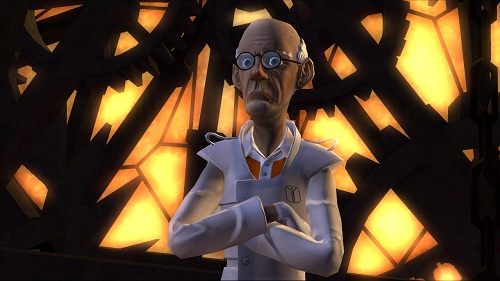 Citizen Brown is a short, but sweet episode, with the filmic references, the dystopian (or utopian however you see it) atmosphere and setting, and yet another killer cliffhanger it also treats us to our first full alternate time-line. Citizen Brown makes yet another brilliant addition to the Back to the Future universe.

Back to the Future: Citizen Brown is available now for Windows and Mac, for a mere $24.95, which buys you the full series of five episodes. With only two episodes left to the season it will wrap up soon, and it is arguably one of the best series' that Telltale Games has given adventure game fans to date. If you aren't completely sold you can download the first episode for free for a limited time, all you need do is set up a Telltale account.

When Episode 4 arrives at the end of April it looks like we are heading back to 1931 in Double Visions to sort out a little pairing that Marty may have accidentally created, with the possibility of focusing on two time-lines running simultaneously, who knows, perhaps we'll see a little cause and effect.