You know how when you tell someone that they should do something, but it turns out that you have actually tempted fate and changed the future of those people for the rest of their lives? You don't? Well Marty McFly sure does, and he's most brilliant at changing his own future, in fact when we last left him in Back to the Future: The Game Episode 1: It's About Time, he had mistakenly made a move to erase himself from ever being born.

It's alright though, because Marty has Doc Brown at his side, and he's there to keep Marty straight, after all he's the only person that can track just how many different timelines that you; the player has created in attempting to fix the slight blunder that the Doc got himself into when he landed in the wrong place, at the wrong time. 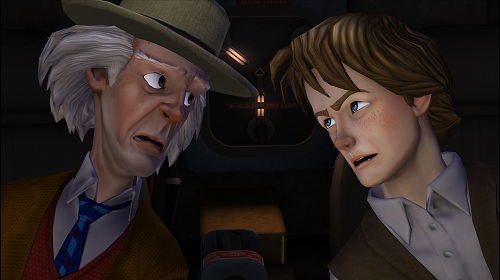 After the shenanigans of Episode 1, Episode 2 definitely doesn't disappoint, you've got as much time travelling, alternate realities and 1930s action that you could possibly handle! Full of witty dialogue, puzzles galore and as much Christopher Lloyd as you desire, the second Episode shows us that Back to the Future: The Game is panning out to be one of Telltale's best series' ever.

The most surprising part about this episode is that it shows off a fraction of what the Telltale engine is capable of; we've all seen the trailer of the soon-to-be-released action packed title Jurassic Park. So it was brilliant to see a little bit of action and sneaking in Get Tannen, as Telltale attempt to test the waters in the first act. Whilst some adventure aficionados may not appreciate the intrusion of such action -much like Broken Sword: The Sleeping Dragon- keeping a balance between the adventure and action aspects was extremely satisfying.

In Get Tannen we return to 1931 to help Marty's ancestor Arthur McFly again as Marty's attempts to fix the mistakes he made in the past, took a turn for the worse at the end of Episode 1; but can we trust Marty and ourselves to not screw up again as we attempt the simple task of ensuring that the past remains the way that it should, considering how fickle cause and consequence can be. 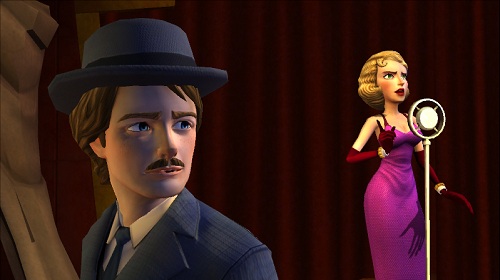 One thing that is great about Back to the Future is it stays away from the horrendous illogical puzzles that adventure games are rife with, all of the puzzles you encounter are intuitive, and if you do ever get stuck the invaluable hint system is so fantastic you won’t even feel as though you were cheating.

Some of the puzzles in the episode are priceless; there is a great little puzzle to be executed back in 1986 to get the Tannen gang off your back, and the use of music to get information out of the character Officer Parker is another nice touch. Just like it felt in the first episode, Get Tannen enforces the ideal that the story is far more important than the puzzles which are there to compliment the episodes to a more satisfying level.

The WASD control system does seem slightly better than it did in the first episode, and continues to improve as Telltale keep popping out games, in fact if the history of the Telltale engine tells us anything and you observe the subtle action segments from the very start of the episode it wont be long before Telltale's Games have evolved out of the adventure genre and into some sort of spectacular hybrid.

In Back to the Future: The Game, you've got beautifully rounded graphics, superb voice acting and well-rounded puzzles, and to top the icing on the cake you've got the best line in any adventure game to date: 'that’s what you get for messing with Carl Sagan'. Telltale have hit the nail on the head with their latest series, and this episode could have literally gone anywhere after Episode 1, but it looks like the series will be going straight up from here. 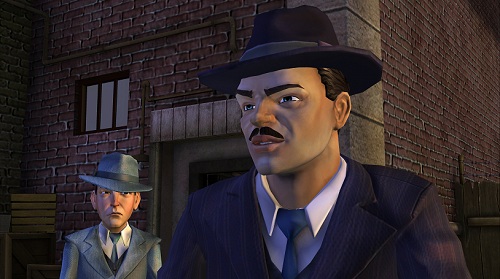 Get Tannen is arguably one of the best episodes that Telltale have created in a series since Reality 2.0, however its downfall is that it is so very short, in fact it can be finished in practically one sitting which is very unfortunate, but for the low price that you pay for a whole season the only reason to complain is that Citizen Brown is not available to play now!

Whilst it is short, Get Tannen! ticks all the right boxes, you have intuitive puzzles, brilliant writing, fantastic voice acting and just a brilliant setting and story; the action sequences just top the icing on an engaging and thoroughly fantastic cake!

It’s only the second episode into the five episode season and things have already begun hotting up; with five different timelines on the go, and our first peek at an alternative reality it looks like we are really going to be in for a shock when we return in Episode 3: Citizen Brown at the end of the month when it takes us away from the speakeasies of the 1930s and into a dystopian future... very exciting!

Back to the Future: It's About Time is available now for Windows and Mac, for $24.95, which buys you the full series of five episodes, if you've never tried out a Telltale series before, there's no better contender than Back to the Future: The Game, if you love the films -which you will because no one hates Back to the Future- then you will not regret your purchase at all.