As Back to the Future has always dictated, no matter what point in time you happen to be in, there will always be a Tannen and there will always be a McFly, this new series from Telltale Games is no different as you see the familiar faces of Biff and his bizarro-world Kid Tannen, alongside your father George McFly and his ancestor Arthur McFly.

From the very moment you begin It's About Time it is obvious that Telltale Games are keeping the same high standard of music production as the films themselves; using a beautiful rendition of Alan Silvestri’s theme song, and a few sneaky bits of Huey Lewis and News you are taken back to the nostalgic days of 1986. However don’t get cosy with Huey Lewis and Weird Science posters aplenty; you won’t be there very long, because you're destined to travel back in time to 1931 in order to help Doc Brown with a little bit of trouble that he has gotten himself into. 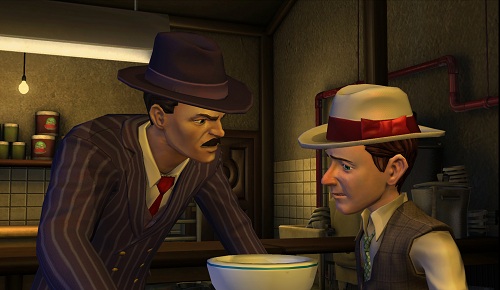 Back to the Future: The Game takes place a short while after the events of Back to the Future III, this however makes the sequence at the beginning fairly confusing, do not worry, I won't give out any spoilers on the story. However as you would expect from Telltale, the writing is top notch, and the humour is fantastic and not overly cheesy, like some adventure games can produce. Telltale have also snuck in their usual original characters, the most prominent of all being Edna Strickland, Principal Strickland’s sister, who will undoubtedly become a pivotal character throughout the story arch.

Possibly the biggest change that has been added to the Telltale engine for Back to the Future is the new hints system which works marvellously well, and seems a lot like the popular Universal Hints System (UHS) and feeds you a small clue on what you are required to do in order to proceed to your 'goal.' Each goal can have a variety of hints ranging from 2 to as many as four hints. Ultimately the last hint is the actual solution to your problem, but having the power to choose exactly how much help you are given is great for an adventure game. Especially great if you find yourself getting a little stuck, but still have the integrity to not give up and check out a walkthrough.

Although the exuberant puzzles were few and far in-between, the standard was high, the best was a good nod to Monkey Island’s classic insult sword fighting as you attempt to help a younger Doc make rocket fuel whilst he has an argument with his father; the exaggerated speed and monotony of the puzzle is fantastic, and definitely one that stands out from the episode. In fact, as you play through the episode you will probably pick up on various little points that just make the episode stand out to you in a personal way, that just shows how fantastic an idea it was to take Back to the Future to adventure gaming. 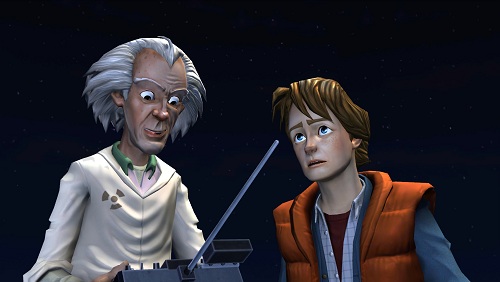 Alongside the hint system there is also a rather interesting goals system that tracks each individual objective that Marty needs to fulfil, this is quite handy for a genre that can quickly loose coherence if you weren't paying attention to a particular conversation, or have loaded up a save that you haven't played for a week or so.

However hints system aside, the episode did appear to be very easy, and most problems were quite obviously solvable, puzzles did not seem to be the intellectual forefront of the game, which must only been seen second to the story itself, which coincidentally is marvellous.

Ever since Tales of Monkey Island, Telltale have passed inherent control to WASD and the arrow keys in controlling your protagonist over the standard Point and Click that adventure games have used for centuries. There is the option of using a Click and Drag type control system, however it just doesn’t really work very well and I always ended up returning to the use of WASD, however for a game presented through static cameras angles, control is thankfully never too difficult.

When it was announced that Christopher Lloyd was on board for voicing Doc Brown everyone instantly knew that the series would need to be brilliant, however what we didn’t expect was that A.J. LoCascio the voice behind Marty McFly would be so spectacular. Each character is brought to life with their own mannerisms, and Back to the Future: The Game looks like it is going to fulfil the void that fans have been waiting for since 1990. The only real problem with the representations of Marty and Doc Brown is that their animations aren’t very prominent, and nowhere near as exaggerated as you would imagine them to be, compared to other Telltale titles, which is unfortunate. 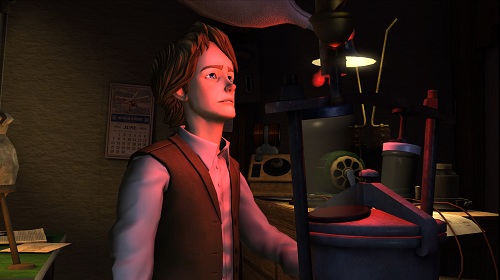 Back to the Future: It's About Time fulfils practically everything a fan of the films could want, and with improvements on the Telltale engine it looks like it is going to be another brilliant series from Telltale Games, and with such a surprising cliff-hanger ending, we can’t wait to see what happens in Episode 2: Get Tannen when Back to the Future returns in February.

Back to the Future: It's About Time is available now for Windows and Mac, for $24.95, which buys you the full series of five episodes.