Think back to E3 back in the lovely warm July, the Gamercast team were up to their knees in great games at E3 and were making sure to get time on any game that was highly recommended. Well one of those games was hidden away in a little dtp booth, and that gem was Ronimo Games' newest title Awesomenauts.

We were lucky enough to interview Jasper Koning of Ronimo Games back at E3 while also getting some time on the game, and to tell the truth we were really impressed with what we saw. Not only from the realisation that some of the founders of Ronimo Games were a part of the former Banana games, but mainly because the game is pretty darn awesome as the title suggests. Since then it’s had the chance to be under the public’s eye at Gamescom and more recently for the first time in the UK at the Eurogamer Expo.

Awesomenauts for anyone unaware is a 2D side scrolling MOBA (multiplayer online battle arena), if you haven't played a MOBA before, they're based around the premise of DotA a Warcraft 3 mod made back in 2003. If however you aren't a PC gamer you can liken the game type to that of Monday Night Combat which is currently the closest to a MOBA game on the current generation of consoles, that is of course about to change though. 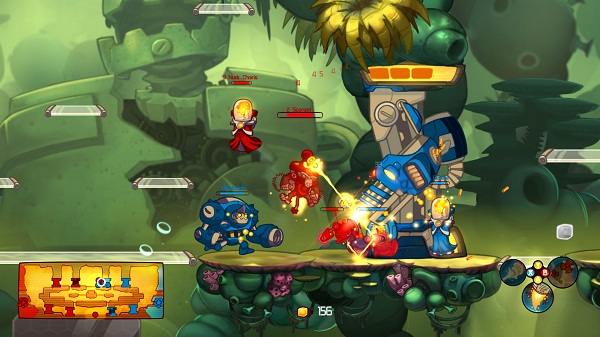 A MOBA is created by having two opposing sides, in Awesomenauts' case the classic Red vs Blue has been used. The goal that needs to be achieved is the destruction of your opponents’ bases which are clearly marked on the map. However they aren't that easy to take out as it can defend itself as well, requiring more tactical choices instead of run up to it and shoot.

You are also granted a stream of creeps who are your fodder that never run out or cost you any gold, they go from point A to point B and attack anything that gets in their path. They act as your backup and will inflict a small amount of damage on your opponents, but will generally have a very small amount of health. In some cases they can get you out of a pickle thanks to a shield they can create, which you can then use to your advantage.

You then have the player controlled heroes, who for Awesomenauts are some awesome...nauts? All suited up in an array of costumes dependant on the character themselves. These little 80s stylised characters are what you spend the game playing as. They range from a monkey with a laser, to a back stabbing chameleon or even a guy with his brain-in-jar who is a pretty good healer. Of course the best way to play is to learn the types and make sure that your team has an even loadout, making the best of your strengths and weaknesses while working together to take down your opponents.

In order to make sure your character is up to scratch when playing, you'll be able to buy upgrades in the store that is within your base. You purchase items with gold, which is obtainable multiple ways throughout the game. This includes every time you respawn; while falling back down to the arena in your trusty rocketship, or when you kill one of your opponents.

So that's the conventions which make up a MOBA, and Awesomenauts ticks all the boxes to being a brilliant game. In my eyes it also has the upper hand over other MOBAs as it is in 2D. Which I feel helps create a more confined experience and will be much easier for newcomers of the genre to pick up.

Awesomenauts is a purely multiplayer game so it is best played with friends online or local with split screen in 3v3 matches. However should you not have enough friends online for a full match you can always have computer AI controlled bots in the game as well, which work just as good as another player, or perhaps even better depending on how good your friends are. The multiplayer also allows drop in-drop out so one minute you'll be playing with an AI, then the next it could be a friend or some random person on Xbox Live. 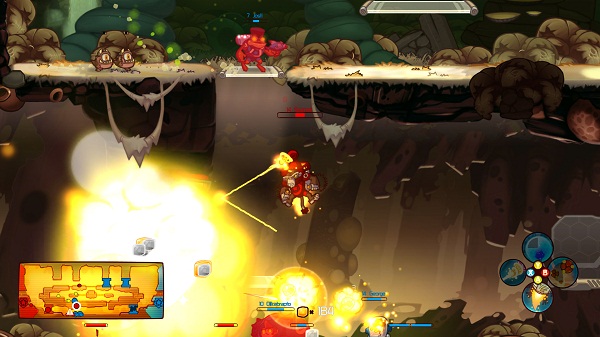 Awesomenauts is set to be a great contribution to the MOBA movement for consoles, especially as they're generally released on PC. The Gamercast team had an awesome time with Awesomenauts both times we got to play it and I hope you're excited as we are for its release. Come release day we all look forward to popping online and getting stuck into some matches.

Awesomenauts is set for a release on Xbox 360 and PSN this winter with a suggested price point of 800 MS points. Sadly there has been no official announcement of a PC release for all those DotA/LoL players out there, but we'll keep our fingers crossed as it is the native platform for the genre.