Avalon Code, a game from the creative minds behind Rune Factory and Harvest Moon launches tomorrow on the Nintendo DS.

The world is coming to an end, and players will take control of Yumil or Tia and fill the Book of Prophecy with a record of everything that's worth saving - people, enemies, flowers, weapons and objects - with these objects saved they will then be able to use these to create a new world with.

In a unique twist on the RPG genre, gamers can also alter the attributes of items listed in the Book of Prophecy as every item, person and monster within the world can be broken down into a simple DNA sequence. And by manipulating this DNA, players can change the makeup of many things - including affecting enemy attributes, changing how objects behave and interact. 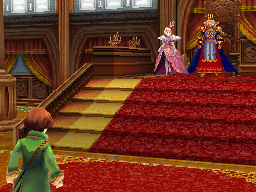 At the beginning of the game the player will be guided by four elemental spirits, who will explain how to use the Book of Prophecy and how to fight, and as the player progresses through the game more spirits will join the player in their quest to collect as many items as possible.

Avalon Code boasts over 20 hours of gameplay, a vast, beautiful and technically impressive experience, which is enriched by an orchestral soundtrack and emotive voice acting.

"We're delighted to confirm the launch of Avalon Code on DS," says Martin Defries, managing director, Rising Star Games. "It offers a variation on the traditional RPG experience, while retaining the polish and appeal Marvelous Entertainment's games always guarantee; this is a rewarding addition to our DS portfolio."

Avalon Code is released tomorrow (12th March) only for the Nintendo DS.