Little Worlds Studio a family-orientated game developer have today announced that it will be bringing its critically acclaimed Animal Colour Cross to Nintendo DSiWare, and will be available to download this spring across Europe for 500 Nintendo Points. 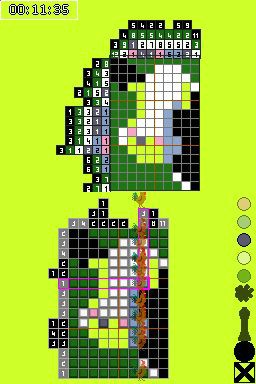 Animal Colour Cross is a new logic based colourful grid puzzle that will prove addictive to all, the goal is to reconstruct an image on a grid, which is solved by referencing the numbers written around the grid, it may sound complicated, but the game is hard to explain, if you’ve ever heard of Picross before, then you’re in for a treat! If not, you’ll pick up the game in a manner of minutes, and no sooner than you started you’ll find that you are hooked!

If you’re a fan of Sudoku you’ll find that your in your element with Animal Colour Cross, gamers will have 72 individual grids that will span up to 50 hours of gameplay, and players will be able to select their grids by geographical zone, each of which increases the level of difficultly, but there is no failure state, you will never be told ‘Game Over’, you will simply rack up time penalties that will hurt your overall completion time for each grid.

Like most picross games Animal Colour Cross will allow players a quick distraction when they have a spare few minutes, don’t feel you need to complete a grid, as it promises a saving system that records your progression on the fly so you can pick up where you last left off, there’s also an aid system to help you along the way when you start out.

We at Gamercast love our picross and I can openly say that Catherine our co-host is a regular addict of them, and owns the original Colour Cross on her DS, she’ll be delighted to know that Animal Colour Cross will be available for download this Spring for a mere 500 points, we know we’ll be checking it out, so will you?

You can also see what the game is like on facebook It's a really good take on the Picross game, with a twist! Here's a trailer giving you the jist as well.