Doublesix, acclaimed developers of the fantastic Burn Zombie Burn have announced the spiritual successor to the game with All Zombies Must Die! A mix of weapons-based arena combat and some light RPG elements that will be available soon. 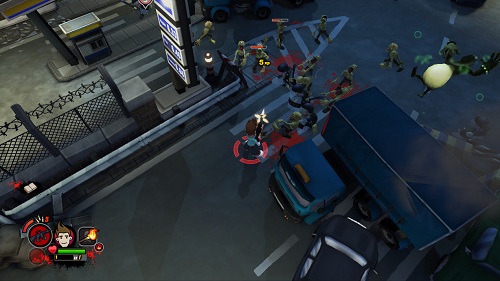 It’s up to a Gamer, a Girl, a Mad Scientist and an Alien to defend the human race against billions of zombies in a fast 4-player co-operative game with elements of action and role-playing involving levelling up, weapons crafting and questing, similar in style and design to Burn Zombie Burn!

Jim Mummery, creative director at doublesix says “After the success of Burn Zombie Burn, we’ve been looking forward to dishing up a new serving of undead craziness but this is no straight sequel. All Zombies Must Die! has its own unique ingredients with weapons-based arena combat, weapon crafting, character development, a whole lot of questing and much much more — all mixed in with a huge portion of zombie action.“

All Zombies Must Die! Will see a release during Q4 on Playstation Network and Steam, sorry Xbox owners, looks like you still wont be getting any fun, zombie-shooting arcade action. Hopefully more details will emerge on the title soon, with no solid details having actually been announced on the multiplayer aspects of the game.