When it comes to conflict, you’ll find more than a fair share of games based on historical wars, more often than not they’ll focus on either of the two World Wars, and with good reason, it’s an easy subject that everyone knows about, and the triumph of good versus evil, however occasionally a game comes around and breaks the trend, and focuses on a slightly more ambiguous conflict; Vietnam.

As obedient Air Force pilot Joe Thompson, you'll find yourself tasked with duties throughout the war, for the greater good, this will include taking out anti-air encampments, and RPGs in amongst the hamlets of Vietnam that are blocking friendly access, and taking out Viet Cong fortifications to name a few, don’t worry though, you aren’t a cold-blooded pilot, and each mission will fail if you cause too many civilian casualties. 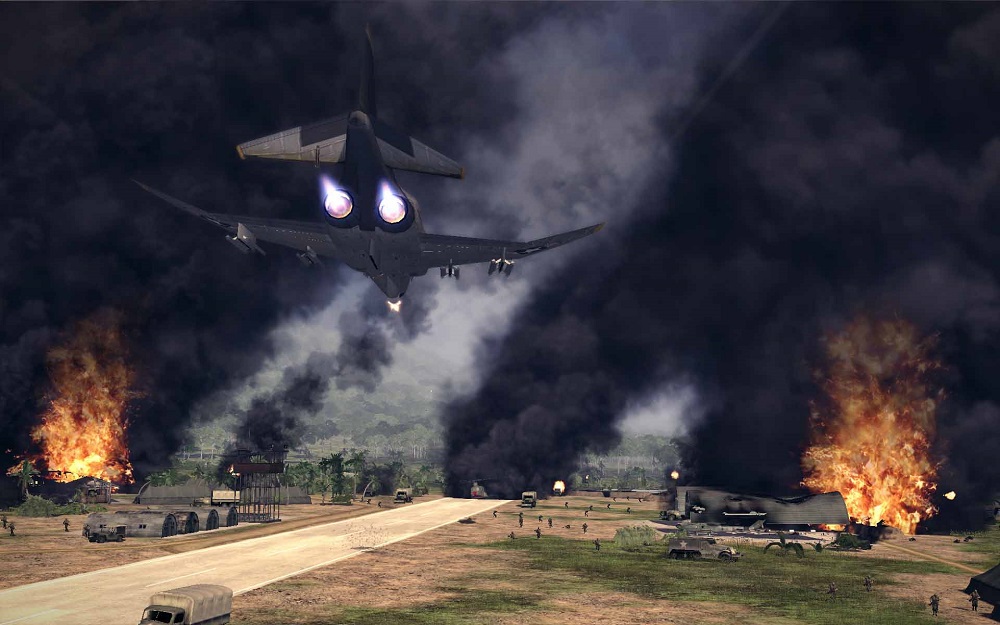 Missions are fairly self-contained, and similar to the previous games in the Air Conflict series, Vietnam spans over countless operations across a series of campaigns where each mission is split up into manageable checkpoints, ensuring that you never get stuck in that ugly spot where you simply can't manage taking out a group of MiG jet fighters, clearing a path for your transports and take care of an enemy convoy with one jet full of ammunition.

As a pilot in the Air Force during the Vietnam War you get the opportunity to sit at the helm of a brilliant selection of over 20 historically accurate jets, and for the first time in the series helicopters! Air Conflicts: Vietnam will see you screaming along in supersonic jets like the F-105 Thunderchief, and providing essential fire support in the iconic UH-1 Iroquois 'Huey', it gets pretty intense, and if you could watch yourself from far away, undoubtedly every mission would look as though it has been pulled from a blockbuster movie, with bombs dropping, buildings exploding and guns blazing! 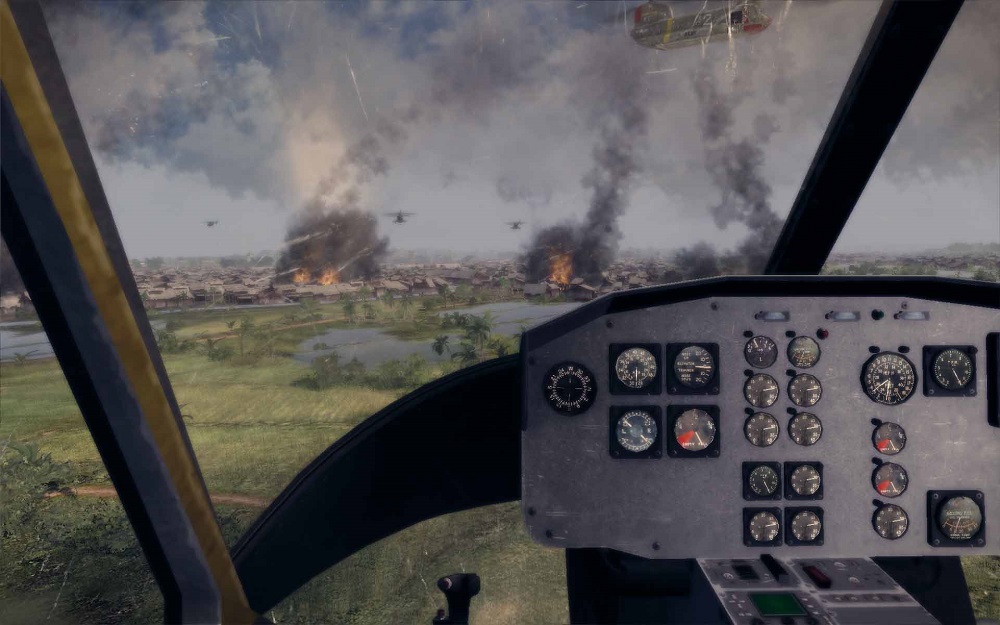 Contrary to a lot of combat flight games available on the market, Air Conflicts: Vietnam doesn't ask a single man to fight a whole army, but places you in a squadron of up to four jets or helicopters, usually with different loadouts making for some tactical cooperation between your team as you tackle different tasks and switch between each available aircraft for the optimum strategy.

One very important factor is that you shouldn't come to Air Conflicts: Vietnam hoping for an intricate flight simulator, this isn't IL2-Sturmovik: Vietnam edition, and the game presents itself as more of an arcade experience, full of tense dog-fights, bombing routines and some old fashioned gunning; perfect for the arcade-style controls. Which is great, because despite simulation working so well at the core of some games, when it comes to flying through the sky shooting down hamlets, you don't want to be worrying about overheating your plane or losing airspeed because your wing flaps aren't in the correct position, which really takes a lot off your mind, allowing for far more concentration on that MiG-21 that's on your tail. 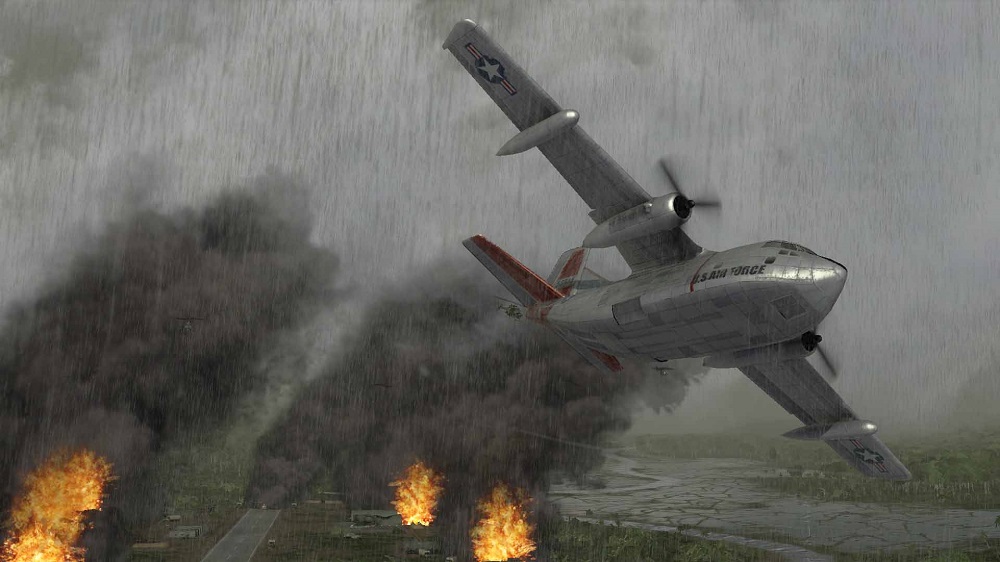 It’s quite a breath of fresh air to find a game based inherently on flight combat and surprisingly not based in one of the great world wars, which in all fairness have had quite the coverage! Inserting players into the Vietnam War not only unlocks a wide variety of interesting helicopters and planes for your perusal, as well as hand you quite a few controversial orders, including the distribution of Agent Orange. Not only that but set during the 19-year Vietnam War is exemplified with the fitting soundtrack laden with classic rock tunes, perfect for listening to as you defoliate forests and clear out the Viet Cong, if a little morbid, just don't expect Ride of the Valkyries to chime in at any time.

It's not all explosions and guns-blazing, and the developers at Games Farm have spliced in a little drama between each mission with the correspondence letters between squadron leader Joe Thompson's family for more personal story, which divulges into some of the views and politics behind the Vietnam war, and whilst you'll never hear Joe reveal in his feelings on the war, you'll be treated to snippets around the introductions to each campaign where you will find his character wane with the questionable acts requested of himself and his squadron. 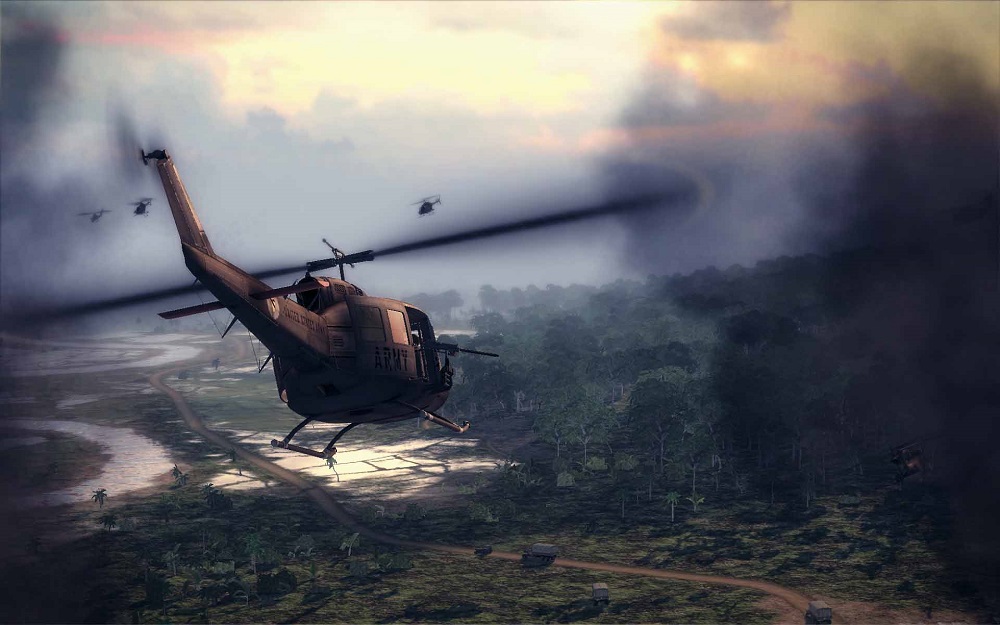 A great controversy of the Vietnam War was the lives lost in battle, however in Air Conflicts: Vietnam no one is expendable, because if you do happen to slip up, and lose a man in action that's a blow to your potential squadron. You can't simply leave a man behind, well you can but you'll feel the consequences later, in order to rectify your mistakes after each mission you're given the option to rescue any missing men. Don't expect an easy ride though, you'll be flying into the thick of the opposing forces, the odds will be stacked firmly against you, and you'll need to fight through hell and high water to penetrate your enemy's fortifications and get your rescue Chinook in close enough to save your helpless men.

If you want to set the skyline of Vietnam ablaze as you tear-down upon the Viet Cong forces with a collection of fast-paced aircraft, and wanted to experience the turbulent Vietnam War from the air amidst the backdrop of the personal story of a US Air Force pilot who discovers the very dark side of war, Air Conflicts: Vietnam is most definitely the game you are looking for.

Air Conflicts: Vietnam is scheduled for a release October 18th 2013 for Windows PC, Xbox 360 and PlayStation 3.