Ubisoft have been known for some time now to produce a nice variety of collector's editions, mainly from the start of the series with Assassin's Creed. But today they have announced the impressive array that they’re releasing for Assassin's Creed III.

In order of price you can see what exactly comes in each collector's edition, as well as a few places to pre-order them.

First up is the Freedom Edition, you get the following: 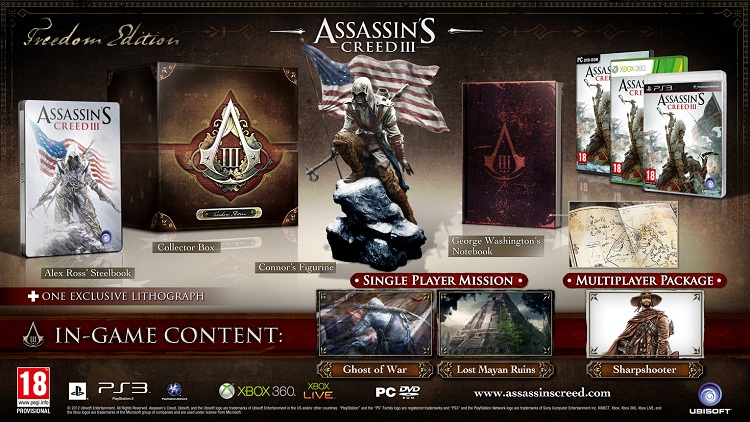 A standard copy of Assassin's Creed III
A 24-cm high-quality figurine of Connor
A steelbook case art drawn by the amazing Alex Ross
George Washington's notebook revealing all the truth & secrets about the Assassins and the Templars during the American Revolution.
An exclusive Lithograph
2 in-game Single Player Missions: Lost Mayan Ruins and Ghost of War
1 in-game Multiplayer Package: The Sharpshooter package

The Freedom Edition can currently be pre-ordered through Gamestop for £89.97, although beware as when you submit your order through Gamestop you'll have to pay for AC3 then. Or you can buy it directly from Ubisoft through their UbiStore for £79.99.

Then the middleweight collector's edition is the Join or Die Edition which contains the following: 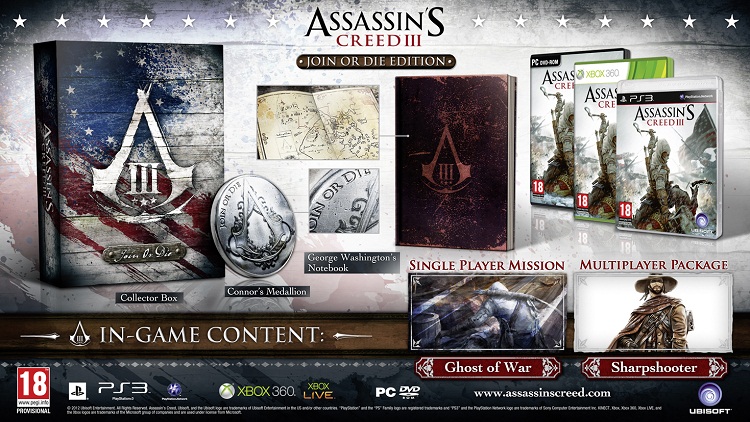 A standard copy of Assassin's Creed III
The medallion of the Assassins
George Washington's notebook revealing all the truth & secrets about the Assassins and the Templars during the American Revolution.
1 in-game Single Player Mission: Ghost of War
1 in-game Multiplayer Package: The Sharpshooter package

And then finally the slightly more standard Special Edition which contains:

The Special edition is currently only available for pre-order on the UbiShop for £49.99, although it will probably appear on more sites soon.

Assassin's Creed III will be available on Xbox 360, Playstation 3 on October 31st with a WiiU release date that is yet to be announced because the console doesn’t have a release date yet, and the release for Windows is yet to be dated.

We've got our Freedom edition pre-ordered, will you be splashing out on one of these collector's editions?