I’m no stranger when it comes to ship fairing games; I once had an addiction to Akella’s Pirates of the Caribbean using mods that turned it back into Sea Dogs 2, there’s no better experience than floating around, trading goods and protecting convoys, except when magic is involved. Thankfully Over Cloud 9 have married the two in a beautifully indie relationship, why don’t you have a look.
you are prepared for the later missions.

Now you won’t just be fighting your bog standard pirates in A Sirius Game, this is a world of magic and fantastical occurrences, so prepare for all manner of magical ‘beast’ as you encounter ships that are Sharks, Peacocks, Swans, dreaded Eagles, Swordfish, Ghost Ships you name it, and just because they are shaped like a bunch of animals does not mean that they can be easily walked over; many of them have crafty defence mechanisms, incredible cannons, and mountains of hit points, these majestic ships sort the men from the boys, and pack quite a punch if you let them.

Using cannon balls is all well-and-good when you are sailing the paddling pools of Afrova, however when you get out into the wide blue ocean you’ll find that it is easy to get in a little over your head without the use of special cannon types and magical ammo. If the pirates of the 1800’s had the ability to harness dark magic, and infuse their cannons with Holy powers, Ice or Fire then that little bit of history would have been a lot more colourful, not to mention the ability to use healing spells, invulnerability spells, freezing nearby enemies, or just setting them alight to make your fights unpredictable and a bit higher in your favour.

A Sirius Game is Over Cloud 9’s first 3D game; the graphics are fantastically simple and eloquent as you catch little people running around towns as you dock. Ship combat is also brilliantly straightforward, and whilst you are unable to carefully place your shots to take down your opponent’s mast, this is an RPG after all and not a ship combat simulator. It’s simply aim with your cannons and open fire, each enemy has hit points, so it’s just blast away to your heart’s content, rinse and repeat. 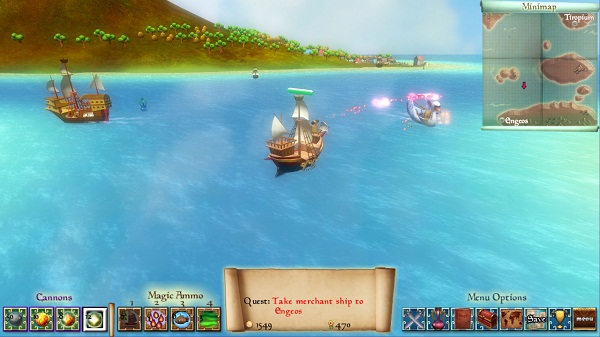 Although your character is the biggest scumbag to ever walk the earth, Over Cloud 9 have successfully made a quaint and addictive indie ship game; whether you want to simply trade goods around, or help defenceless merchants cross treacherous waters the choice is yours. With the allure of the main story you’ve got quite a handful of gameplay to tide you over with.

A Sirius Game is available now from Over Cloud 9’s website for $12.99, for those a little stuck, there is also a strategy guide available for all hints, tips and mission help.