I first heard about 3D Dot Game Heroes shortly after it had been announced in the US, however like a large percentage of games I've been talking about recently on the podcast, I thought it would never actually get a UK release. Now a few months down the line, it's actually coming out really soon! The 14th of May 2010 to be precise.

3D Dot Game Heroes is the product of Atlus and SouthPeak Games who are lovingly bringing it to our shores. I would best describe it as an old school 2D RPG, thats 3D, it has the personality and gameplay of an old RPG, coupled with highly detailed worlds.

A noticeable feature in the game is the large amount of distance blur, don't let this put you off though, you may think they're throwing fancy engine effects here and there for the hell of it, but they aren't it helps add to the whole feel of the game, the kind of dreamscape that makes me think of Sylvanian families. 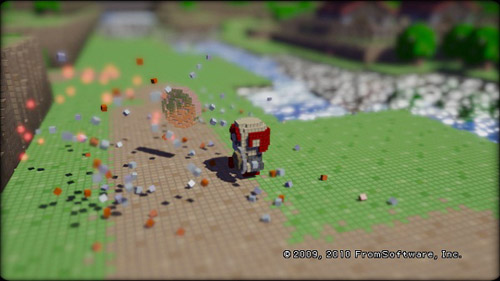 An interesting offering that the game has, is the choice to install it to your hard drive, unlike some PS3 titles that do this you are never actually forced to install it, and if you do take it up on its offer it makes the loading times extremely quick. This way if you don’t have the space on your hard drive for the install you can still play it. However I’m considering deleting my install data as the loading screens that pop up during the game also pay homage to existing role-playing games, and I want to see them for longer!

One of the main features in 3D Dot Game Heroes which separates it from the crowd, is its character creator, although the best way to describe it is a builder, as you create your character completely from scratch; it's almost like you're moulding him/her from clay, except it's actually pixels. You're confronted with a 3D gridded space and a palette of colours, with only your creativity to rely on. However if creating characters isn't really your thing you are given a large amount of premade characters to choose from that range from dragons, to santa, even the Tenchu characters are in there! Or if you have a really creative friend they can share their creations and save them to a USB, and you can put them into your game.

It features a save system similar to most memorable old RPGs, where you are given the option to save at any point, however if you die the game offers to continue, which if at the start of a dungeon will just put you back at the entrance, so that way you are restarting your character with the same inventory you had when you died, just with full health.

Now if you're a huge fan of the Zelda series, this is a temporary Zelda fix, however the Zelda series has a very serious tone to it, whereas 3D Dot Game Heroes is very light hearted, and with all its in-jokes and over exaggerated weaponry it's a completely different RPG from Zelda, it will just feel very similar when you play. For instance a classic Zelda element, other than the map is when you get an item from a treasure chest, you almost want to hear the correct SFX we all know that fits to that animation, another similarity is the title music also feels quite Zelda like, which is the obvious game that Atlus were referencing to throughout. 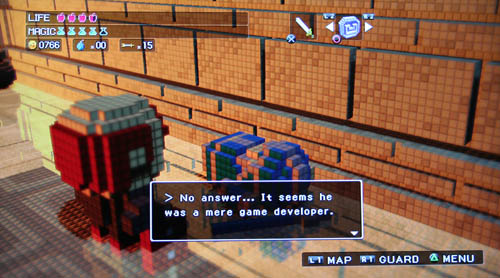 A huge upside of the RPG parody is your ridiculously oversized sword, it’s the ultimate weapon which all games should feature. One sweep or stab of your sword and all the enemies in your vicinity are hit (or wiped out dependant on the enemy). This also comes in handy with pots, you aren’t required to pick them up and throw them, you can just shatter them to pieces, saving you much needed monster killing time.

I really enjoyed 3D Dot Game Heroes, and without spoiling anything I think that RPG fans will be delighted with it, it can get quite difficult at times, which can lead to some frustration, but you would get the same from A Link to the Past. So I highly recommend it to RPG players, and for anyone who loves to see the fourth wall broken, it's one of the first games that fully uses games culture as a parody and pulls it off wonderfully without causing insult. I loved 3D Dot Game, the only things I didn't like about the game or had problems with are barely worth mentioning. 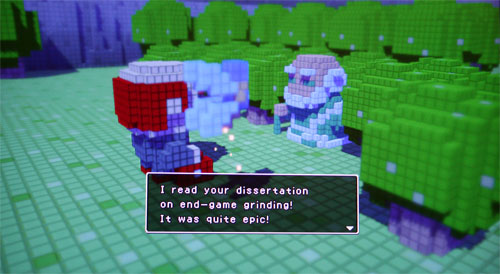 3D Dot Game Heroes is out on the 14th of May exclusively on Playstation 3, you can pre-order it from GAME here.

Incidentally you can try out the character creator here, unfortunately you can't save your creations to put into the game, but it'll give you a headstart on if you want to create your dream character in 3D Dot Game Heroes.