If we asked you the question Ninjas or Pirates which would you pick?

If you said Pirates what the hell are you doing here?!

If you said Ninjas come on down and get your ninja on with Naruto Shippuden: Ultimate Ninja Storm 2 which has been developed by a company who definitely aren’t new to the Naruto scene; CyberConnect2 have been working on Naruto games since the Ultimate Ninja games on the Playstation 2, as well as some work on the .hack series, so they are no stranger to anime titles. Namco Bandai have kindly brought the second in this series over to the UK, and -as many fans will love- this is the first in the Ninja Storm series to be released on the Xbox 360. 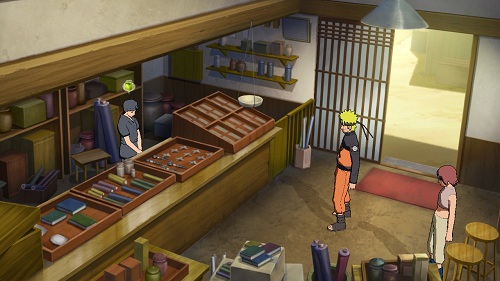 Naruto Shippuden: Ultimate Ninja Storm 2 will feel like home to those that have played Ninja Storm in the past, with the same brilliant game modes and a lot of the varied and exciting characters we have seen before it looks as though little has changed with the series. Until you get to the story, which is vastly different since the end of the first game.

Guided by Sakura at the Hokage's office you will find the story is a lot easier to get into than previous games, as you are broken into your first mission, making Ninja Storm 2 far more friendly for players that are new to the series. For those unaware Naruto Shippuden Ultimate Ninja Storm 2 is much like Tekken, and its Story Mode is made up of a list of fights that are all sewn together by an interweaving story line, and practically plays like an extremely long episode of the series.

Don't expect to go controlling Naruto for all of the story, players will be given control over a variety of different characters depending on the situation they are in; so in the fight against Sasori you will find yourself controlling Sakura, however when Deidara kidnaps Gaara, you will be in the control of the slightly sadistic Gaara. Most battles are fought in tag teams, so you will always have the backup of a support character to perform an attack or defensive move which can help you either close in on your opponent, or back away depending on what your situation requires. 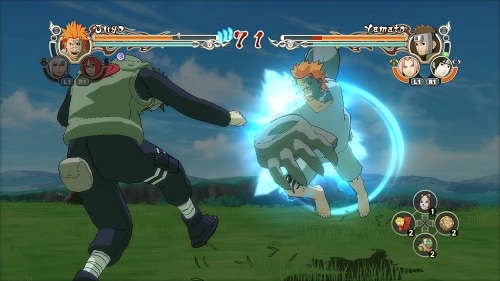 Aside from the main quests of the story you will also find numerous side quests to wile your hours away, these can be found around the village from specific people at certain times. These are mostly simple A to B quests, or foraging missions, and are mostly easy and enjoyable to accomplish, although there are some more difficult ones that can run into the story line.

Incidentally, fans of the anime will rejoice at Namco's decision to once again include the Japanese voices in-game, so that Naruto Shippuden: Ultimate Ninja Storm 2 can be enjoyed the way it is meant to be played, with the option to use English or Japanese dialogue.

Without a doubt the best part of Naruto Shippuden: Ultimate Ninja Storm 2 is the art style and models that are as close to perfection as the series of games could get to the original anime, fighting in battles looks as though you are watching an episode of the hugely successful anime, adding greatly to the appeal of the Story Mode which almost feels like you are watching a full-length episode.

As well as the Story Mode you also have the option of Free Battle which can either be played P1 v Com, P1 v P2 or even Com v Com if you just want to watch the glorious animation of the characters. It is easy to get hooked on Free Battle trying out different combinations of characters as well as to try out all of the spectacular ninja moves. However Naruto Shippuden: Ultimate Ninja Storm 2 has lost the ability to fight on walls that was present in the first game, which is a shame as it was an extremely effective feature. 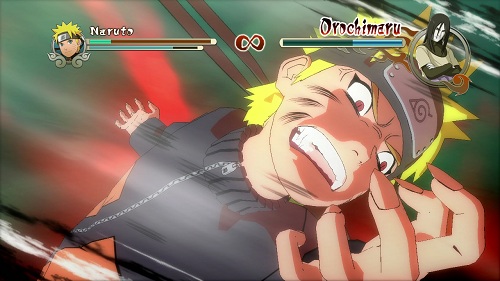 The game is very easy to just pick up and play and due to the large contingent of save points it can easily be enjoyed at short amounts at a time. Free Battle is easy enough to master that anyone can join even if they haven’t played any Naruto game in the past. After having personally stopped watching the Anime just after Shippuden started I felt that what I had seen was faithfully represented and well covered with the flashbacks present throughout, and got instantly hooked on the story.

Naruto Shippuden: Ultimate Ninja Storm 2 is a great game for Naruto fans, and the magnificent animation is a perfect substitution for the anime, although it does seem to load a lot between fights and story segments this game is definitely worth the waiting times.

Naruto Shippuden: Ultimate Ninja Storm 2 is available now on Playstation 3 and Xbox 360 as well as the standard version of the game, a special edition is also available and exclusive to GAME stores, you can find out more here.