EA’s press conference was rather conservative this year, Move supported games were nowhere in sight, and the longest game on show was in fact the game of the whole conference, the highly anticipated Battlefield 3. There were a few sports icons present, and a smoke machine, but otherwise it was just about the games.

Unfortunately when you compare the quality of the games at the other conferences to EA, It is surprising that a few of the games that they showed are not available to play over this week at E3, and a lot of them have release dates in the far future, or no release date at all!

Battlefield 3 was possibly the most stunning game that EA had on show, with photo realistic graphics and impeccable destruction physics; it was no surprise that the version demoed could only be run through a PC, albeit it was all gameplay footage running live. 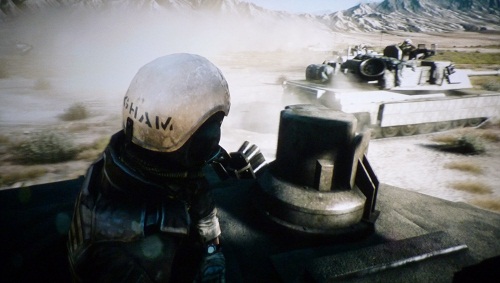 What was most surprising in the newest gameplay of Battlefield 3 is that there is not a radar, or minimap in sight, which is hopefully there to stay; creating a far newer, rawer first person experience, that will hopefully sway gamers away from the newest Call of Duty Modern Warfare 3, to Battlefield 3, I know we are far more excited for Battlefield 3.

The demo for the conference included a shootout in the Tehran desert as the player assumes the role of a tank gunner, caught up in the cross fire, the combat looked absolutely intense, and using aerial guidance systems, and thermal imaging, Battlefield 3 is the true modern warfare title out this year!

As a bonus, DiCE also announced that there will be a beta for Battlefield that will be live in September.

The demo for Battlefield 3 looked absolutely fantastic, and if we have time we will definitely be heading down to the EA booth to try this baby out before it is released with the speculative date of October 25th 2011 in North America.

The next big game at the conference was Mass Effect 3; Bioware’s Casey Hudson introduced a new demo of the game that was full of larger than life combat, more action than ever before, and new locations for Mass Effect 3.

The demo shows off the hi-octane action, crossed with loads of shooting and dynamic player situations. The demo seems to take place, at the height of the war between the Reapers and Humanity. With a taste of the proposed action on a large scale, you are pitted against a living Reaper as you are chased over a planet with nothing but a railgun for protection. 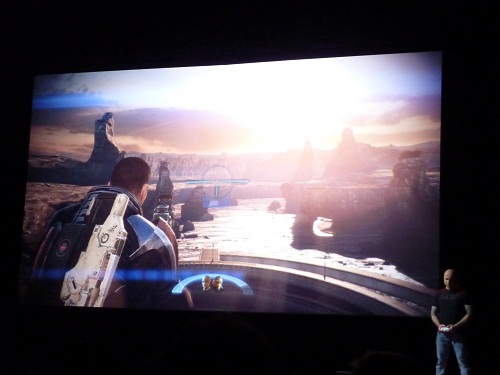 With characters like Joker, Legion and Garrus making a return, as always the third game in the series will question what decisions you made in the last game, as well as who you managed to save.

The Microsoft conference also affirmed that new to Mass Effect 3 is Kinect support, that allows players to set up tactical strategies by telling your team members to cover in certain locations, attack enemies and use special attacks. Kinect support also allows the player to say Shepherd’s dialogue trees rather than select them to further engross you to the famous commander.

Another mysterious feature that has found its way into the game is Shepherd’s new melee close-combat attack, what this means to the Mass Effect combat system, or even the concept of melee in the game, waits to be answered soon, before the games release on March 6th 2012 in North America.

If there’s one game we will be heading straight for when we have spare time on the show floor, it’s Mass Effect 3, so expect to hear our views on a hands on of the 2012 game of the year contender, and what this new cross between Adam Jenson’s augmentations and Altair’s hidden blades.

Need for Speed The Run and SSX from Tim